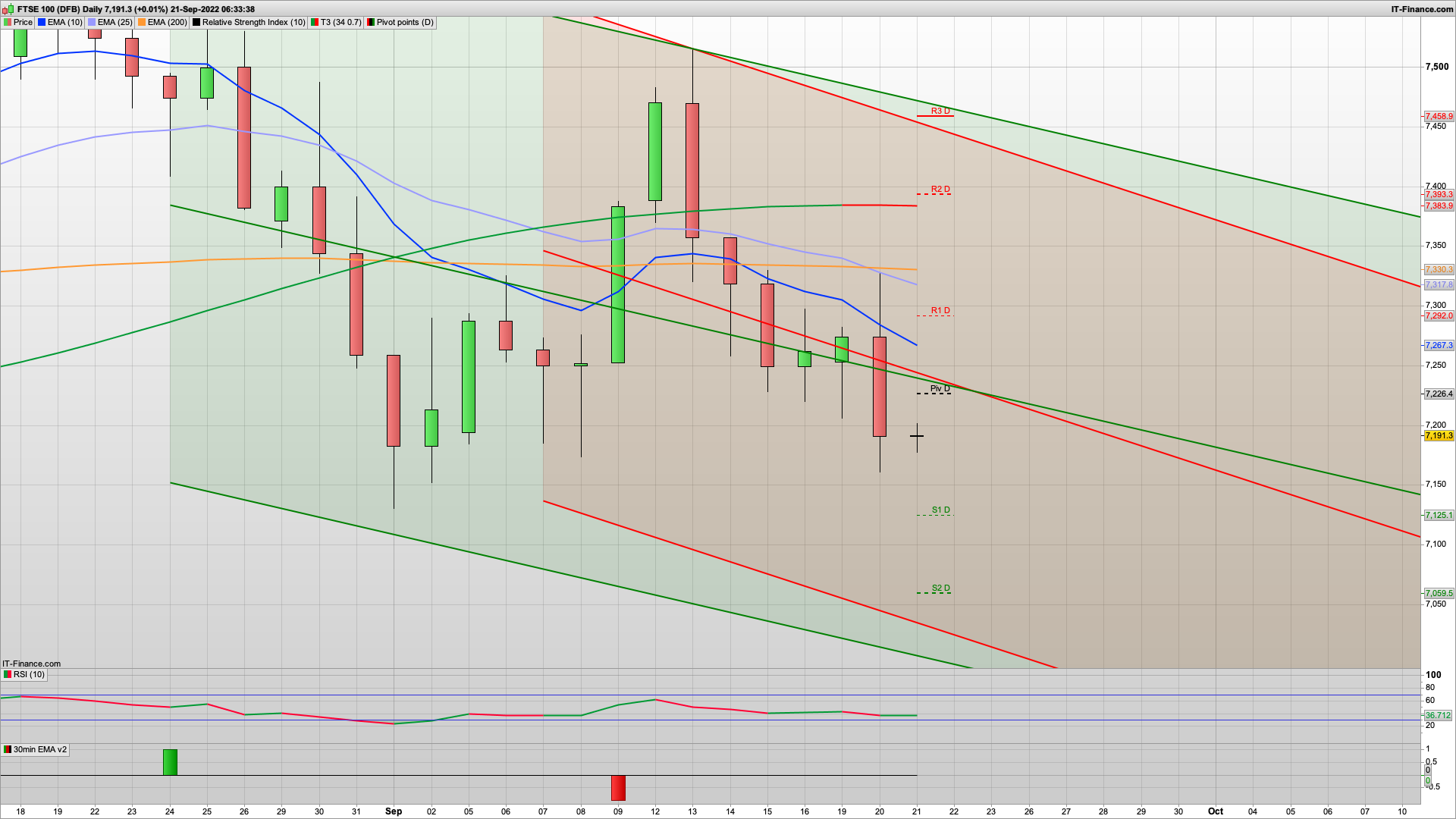 The FTSE 100 slipped to a fresh two-week low as concerns over major interest rate hikes weighed on trading sentiment. The threat of surging interest rates particularly weighed on housebuilders, with Persimmon and Barratt tumbling, amid concerns the increases will hit mortgage demand. London’s top index ended the day down 0.6pc at 7,192.

Asian stocks fell after US shares declined and Treasury yields held near multiyear highs as investors position for a hefty interest rate hike from a hawkish Federal Reserve.

Equities declined in Japan, Hong Kong and Australia after the S&P 500 Index dropped more than 10% below the August high marking the peak of its rally from this year’s low. US contracts fluctuated and European stock futures fell.

Stocks in Asia sank and bond yields were elevated on Wednesday, as investors braced for another aggressive interest rate hike from the U.S. Federal Reserve later in the day.

That follows a sell-off on Wall Street overnight that knocked 1.13% off the S&P 500, although futures pointed to a slightly higher open on Wednesday.

The Fed headlines a week in which more than a dozen central banks announce policy decisions, including the Bank of Japan and Bank of England on Thursday.

Sweden’s Riksbank surprised markets overnight with a full percentage-point hike, and warned of more to come over the next six months. Despite that, bets for Fed tightening stayed stable.

Markets are pricing in an 81% chance of another 75-basis-point increase, and see a 19% probability of a full percentage point rise. Global yields rose amid expectations of further tightening.

Meanwhile, crude oil continued its decline amid worries that aggressive tightening by the Fed and other central banks would crimp growth and curb demand. Brent crude futures dropped 26 cents to $90.36 a barrel after falling $1.38 the previous day. U.S. West Texas Intermediate crude was at $83.74 a barrel, down 20 cents. The October delivery contract expired down $1.28 on Tuesday while the more active November contract lost $1.42.

BoE
Investors are betting that interest rates will hit 3.75pc by the end of the year as the Bank of England battles to contain inflation. The Bank is now expected to increase rates by 0.75 percentage points on Thursday, taking them to 2.5pc in the biggest increase since Black Wednesday in 1992, when the government increased borrowing costs by two percentage points in a doomed attempt to avoid a collapse in sterling.

Traders are also pricing in 2 percentage points of rises over the next three meetings, implying that rates will jump from the current rate of 1.75pc to 3.75pc, their highest level since 2008.

Economists said the Bank had to act to control inflation, which stood at 9.9pc in August and is expected to climb back above double-digits this Autumn.

Bit of a pump to start with yesterday that stopped just shy of the 7330 level, before a sustained decline as the war rhetoric ramps up in Russia. We also have the interest rate increases looming with the question of how much. Fed today and BoE tomorrow, with the Fed looking to raise rates to 3.25% today.

Initial resistance is at the Hull MA on the 2h today at 7200 and with the red 30m coral here as well we could see an initial drop down to the S1 level at 7125 play out. There is key fib support between these levels though at 7165 and thats just above the overnight low at 7160.

Above the 7200 level then the bulls would be looking to gain some ground towards the 7250 area where we have the 30m 200ema, and just above the 2h coral, with the key fib at 7271 above. 7292 is R1 for today, maybe a big ask for today with the Fed announcement and Russia ramping things up.

Below 7125 then its going to get quite bearish with the bottom of the Raff channels around the 7000 area and a likely bearish target. That said, the S&P500 2h chart is more optimistic, with 3833 support in play, but more likely a test and hold of S1 at the 3818 area. The 30m chart is bearish to start with so we may well get an initial dip down to that support area and then a bounce. It’s really up to the bulls to defend today ahead of the Fed. They need to break above the 3868 daily pivot really, and then 3895 where we have the 200ema on the 30m.

So, remain nimble as we have the interest rate decisions today and tomorrow. They usually say “its priced in” but we will more than likely still get reactions on the markets as they are announced.