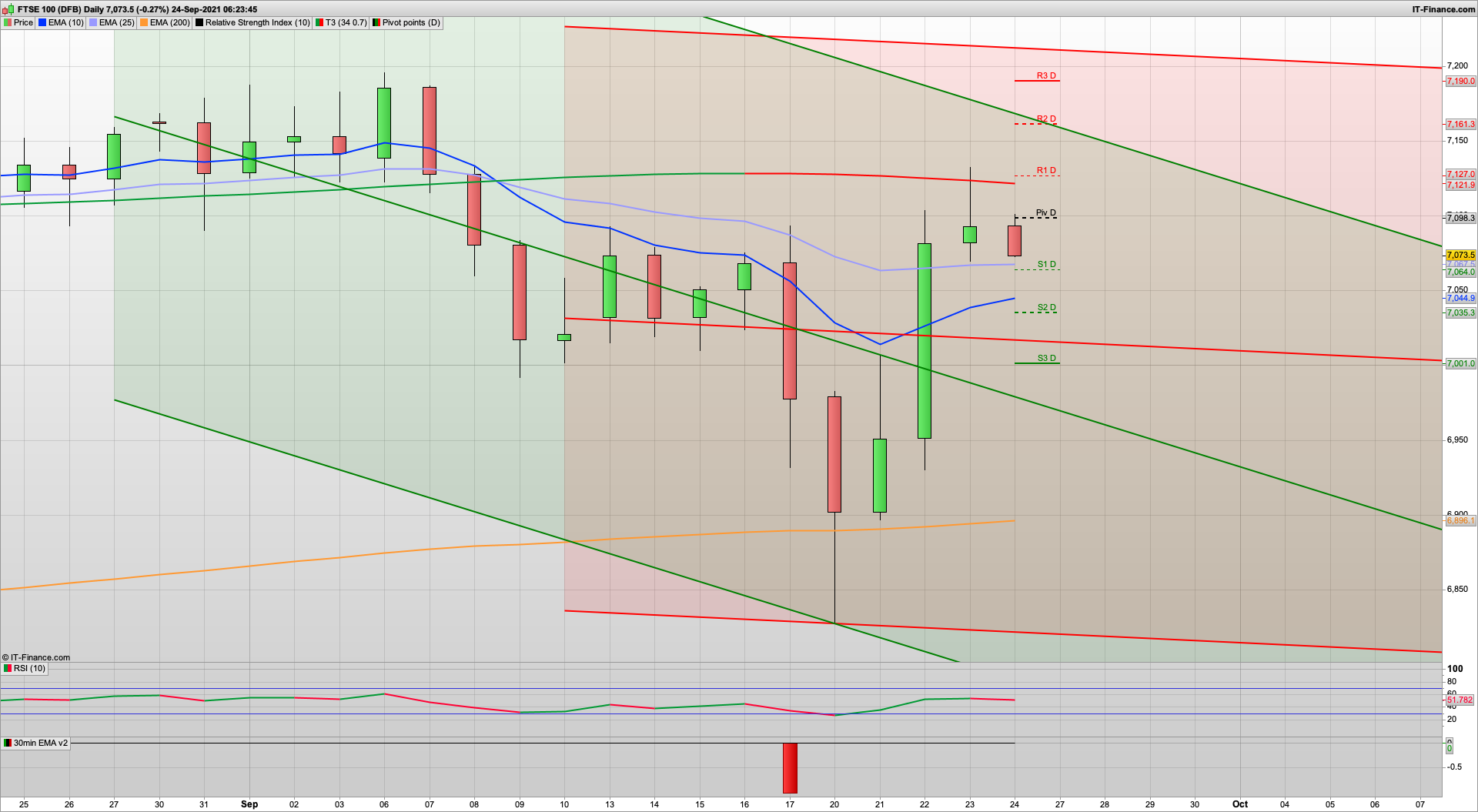 The FTSE 100 was dragged lower yesterday by a stronger pound after the Bank of England said the case for hiking interest rates had strengthened. The blue-chip index closed down 0.07pc having risen as much as 0.7pc earlier in the day. The domestically-focused FTSE 250 rose 0.2pc.

Both indices lagged behind wider gains for European stocks as concerns about Evergrande’s debt problems eased.

It came after the Bank of England lifted its forecast for inflation at the end of the year to above 4pc – more than twice its target rate. There was no change to interest rates and bond purchases, but the Bank said there was a stronger case for tightening monetary policy.

The pound jumped 0.6pc against the dollar as well, after the Bank of England said the case for higher interest rates “appeared to have strengthened”.

Oil prices have risen to their highest level in nearly two months as investors focus on declining global stockpiles. US crude rose as much as 1.8pc yesterday, reversing an earlier decline, while Brent crude hit its highest intraday level since early July. Oil inventories in the US are at their lowest since 2018, with output levels weaker due to recent storms. Supplies at a key hub in Europe are also lower amid surging natural gas prices.

We are coming into some key resistance levels initially so may well get a dip and rise play out today. Its also a Friday so likely to be a bit strange! The S&P500 has strong resistance at the 4473 to 4479 area, and likewise the FTSE100 has 30m resistance at 7100. We have the red 30m coral here along with the daily pivot and also being round number it may well see a bit of an initial reaction. The ASX200 had a bit of a bearish session today as well though it found support at the 200ema (30m) and with that 200ema at 7044 on the FTSE100 we may well do the same.

7064 is also the Hull moving average support on the 2 hour chart with an as yet untested green coral support line at 7013. If the bears were to break below 7044 then I am expecting us to drop down towards that 7013 level.

For the bulls, if they can break above 7100 then we should see a rise to retest the daily coral at 7122, and the daily resistance at 7131. Above this then 7151 is the key fib and just below R2 at 7161. If we start to see these areas though then the short term low is definitely in at 6840. The FTSE may even start to put in a bit of a positive performance going forward!

With the recent strength the 2h FTSE chart is certainly looking bullish still, but the key will be if the S&P can push through its resistance at the 4475ish area. If so then 4500 is the next key area as we have the top of both the Raff channels here. 4502 is the daily coral as well. With the green 2h coral on the S&P500 at 4378 and rising we could well see a slide down to that sort of area next week.