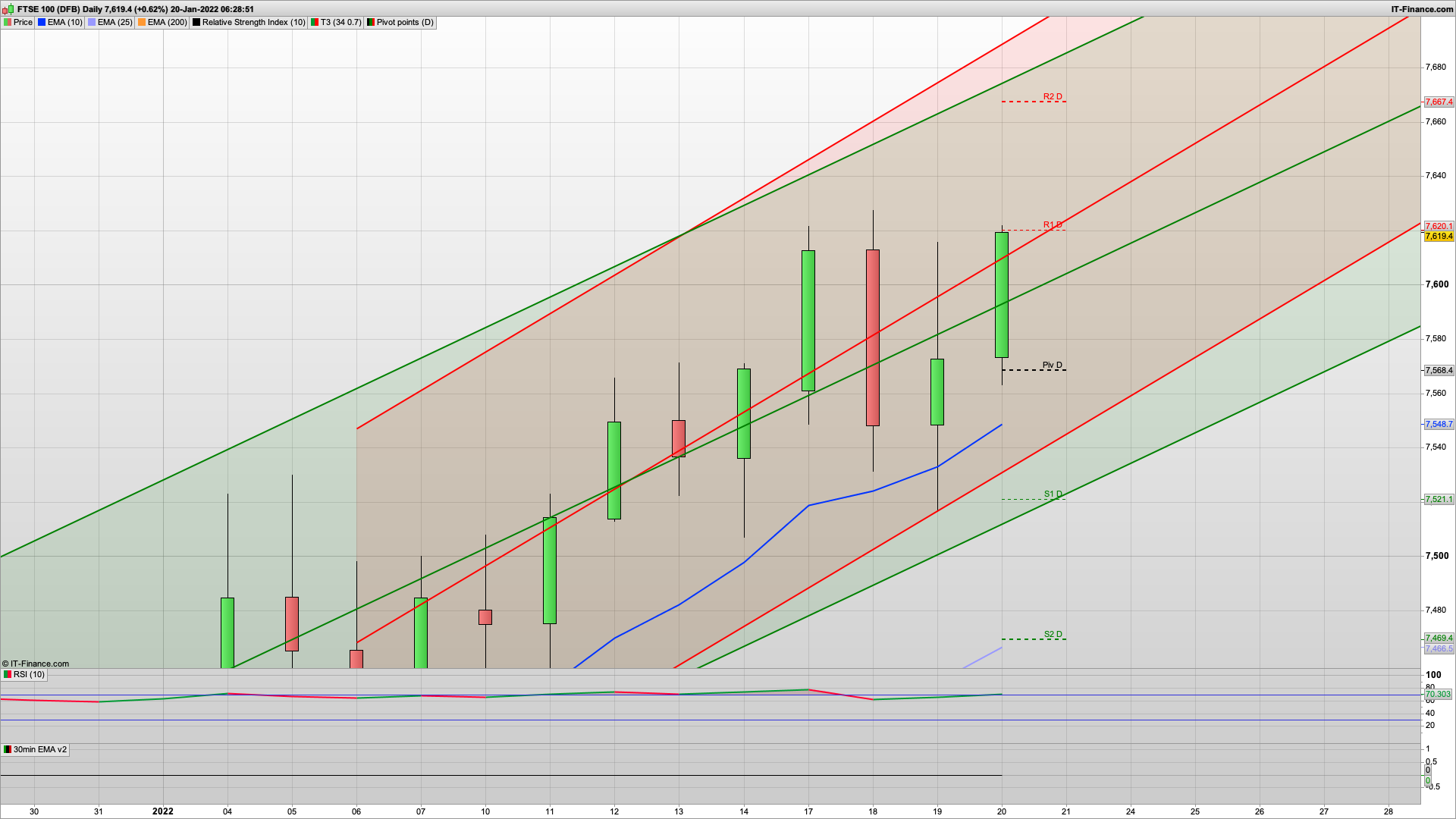 The FTSE 100 closed Wednesday 0.3% higher at 7,589 despite UK inflation hitting its highest level since 1992. CPI rose more than expected to 5.4% in December, official data showed, adding pressure on the Bank of England to raise interest rates again next month.

Bank of England Governor Andrew Bailey has warned surging inflation will linger into next year, suggesting the worst is still to come for the UK’s cost of living crisis. The Bank boss said political tensions over Ukraine and their potential to keep energy prices higher for longer was a “very great concern” for inflation. Wholesale gas prices are now expected to remain high until later 2023 – over a year longer than thought.

Meanwhile, U.S. futures and Asian stocks rose Thursday as sentiment received a fillip from a pause in the global sovereign-bond selloff and possible steps to ease the cash crunch in China’s struggling property sector.

MSCI Inc.’s Asia-Pacific share index snapped a five-session drop, led by a climb in Hong Kong amid a technology rally. U.S. and European futures were in the green. The S&P 500 shed 1% in a choppy session Wednesday, while the Nasdaq Composite entered a correction, down over 10% from a November high.

Chinese regulators are considering making it easier for builders to access certain funds from presold properties, a step that would help tackle the industry’s liquidity crunch. An index of property developer shares climbed. Separately, Chinese lenders loweredborrowing costs to boost the economy.

Treasury yields steadied but remain higher for the week on concerns about elevated inflation and the prospect of Federal Reserve interest-rate hikes. A dollar gauge was little changed, crude oil held gains and gold was around a two-month high. Australia’s currency advanced on a tumble in unemployment.

President Joe Biden just held a wide-ranging press conference to mark one year in office. On China he said he’s not yet ready to lift the tariffs Trump imposed on Chinese imports, despite calls from U.S. businesses to relieve the duties. On Russia, Biden said he thinks Vladimir Putin may “move in” on Ukraine after amassing more than 100,000 troops on the nation’s border. And on the nation’s finances, he said it’s the Federal Reserve’s job to rein in the fastest pace of inflation in decades, and supported the central bank’s plans to scale back monetary stimulus.

The bulls fought well yesterday and managed to pop both the FTSE100 and the S&P500 through some key resistance levels but the US picture still looks weak for today. The FTSE100 does look more bullish still though, and is hanging on to the 7600 level. Initial resistance is at the 7636 level still, and as such we may well see an initial move down before some more upside on this later on, if the bulls can defend a drop down to the 200ema and daily pivot at the 7570 level.

Above the 7636 level then the bulls will be looking for 7700 and the next daily level at 7730, along with R3 at 7719. I don’t expect us to get that high today with the weaker S&P thats currently playing out, but never say never!

The S&P500 bulls need to break above the 2h resistance at 4566 to start with today and then that may well see a test of the 2h coral at 4600-4605 area if they do so. What happens here though as key as a failure to capture and hold the 4600 level may well see a further slide down towards the 4500 area. The overnight drop has been defended and its pulled away from 4520 so far so up to the bulls to be quick out the blocks today.

The FTSE100 bears will be looking to initial drop this down to the pivot as mentioned, and then a break of that 7570 level would likely lead to a test of the S1 and key fib at 7521. Below that then 7470 is next up where we have the S2 level and the 25ema on the daily. However I am not expecting us to get down that low, as we have the bottom of the Raff channels at 7530 and 7510 for today. We have already had a good test and climb from the 10 day Raff so the bulls will be keen to build on that.

The Dax is just on a key fib at 15855 as well to start with, so we could see the bears drop it down from here towards the pivot at 15756 initially. Lower support that looks good for the Dax is at 15625. That was a good short yesterday off the 15890 level but again the bulls have fought back well since testing 15750.  They are certainly not out of the game yet, despite us getting closer to the seasonally weaker stage!

So, am expecting the FTSE100 to remain bullish still for the moment, but a dip and rise today. It feel like we may well see 7700 soon though as its building up ahead of the much talked about “cost of living crunch” thats going to hit the UK in April – was even the lead story on Bloomberg this morning!