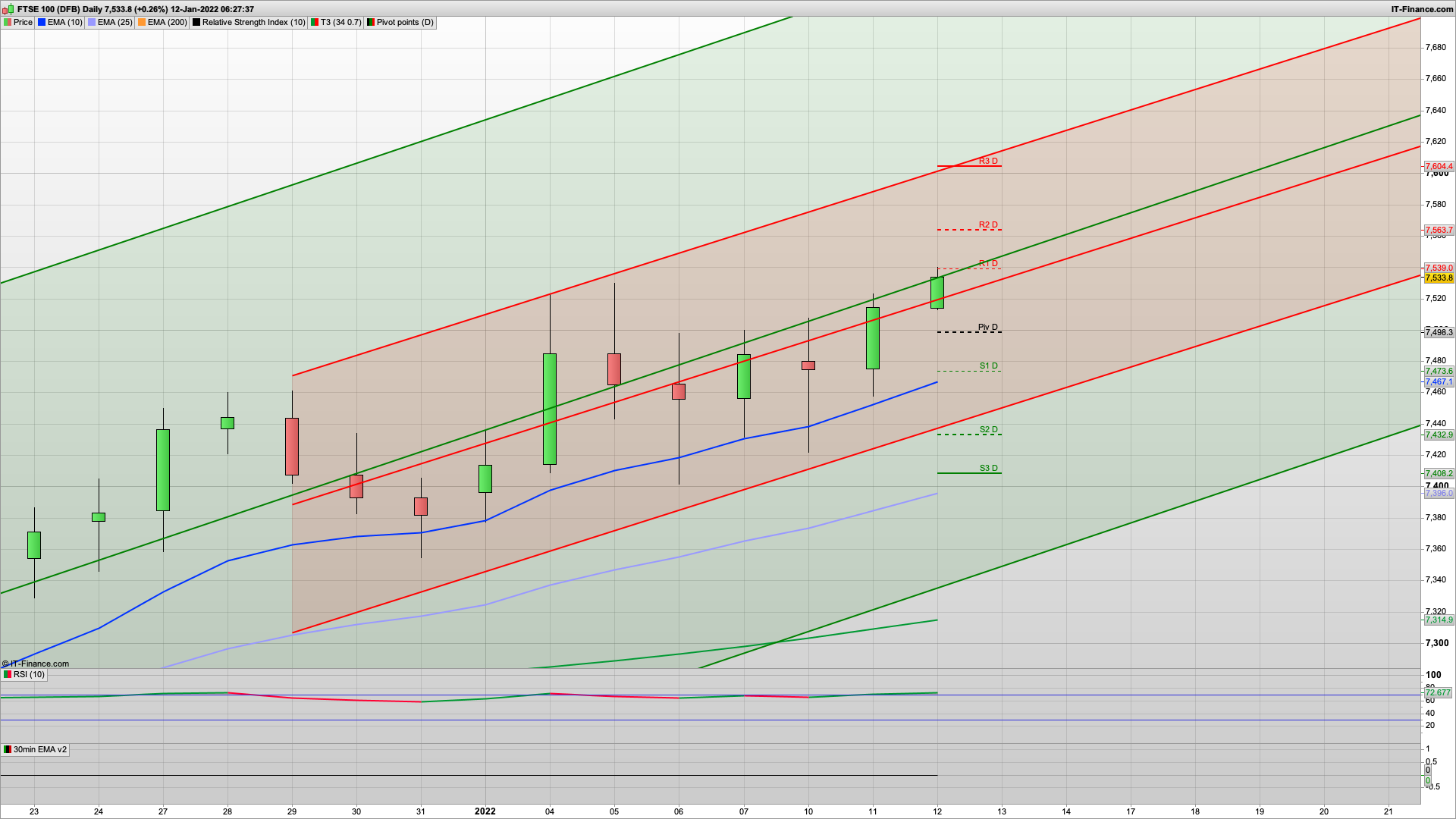 The FTSE 100 took a breather after a recent sell-off on concerns about tighter monetary policies, closing 0.6pc higher at 7,491 (0.6%) while the pound hit a two-month high against dollar. Futures have risen strongly though and are just above the 7535 recent high so we could see continued upside today. That said we have the US CPI (core inflation) out later (1330) so likely to see more volatility then. Forecast is 7% versus 6.8% previously.

U.S. futures fluctuated after the S&P 500 halted a five-day slide and the Nasdaq 100 outperformed.  Treasuries found support after a solid three-year note sale. The yield on the 10-year note held a drop, while the curve flattened. The dollar resumed a slide, while oil prices held gains.

Powell told the Senate Banking Committee that officials won’t hesitate to act if needed to contain price pressures. He also said the Fed will probably start shrinking its balance sheet this year. He noted the runoff would be quicker than the last time the central bank reduced asset purchases because the economy was in a much stronger position.

Reining In
Jerome Powell pledged that the Fed will do what’s needed to rein in inflation, and reiterated that he expects the disruption between supply and demand that’s driven up prices to abate. But he refrained from echoing comments from his colleagues — some on the same day — that a March tightening was on the cards. Two officials backed lifting rates as soon as March and a third urged the central bank to begin winding down its bloated balance sheet sooner rather than later.

Booster Warning
European Union regulators warned that frequent Covid-19 booster shots could adversely affect the immune system and may not be feasible, while the World Health Organization warned that if the current infection rate continues, omicron could infect half of all Europeans within weeks. Meanwhile in Asia, a record 46% of all Covid tests in the Philippines are coming back positive; Hong Kong parents expressed fury as more than half a million young children were told schools would be closed after three tested positive; and China blocked some flights from the U.S. as it battles to keep the virus out. In the U.S. Jamie Dimon warned that vaccine holdouts among JPMorgan’s staff in New York face the sack.

Bit of a fake break lower on the US markets yesterday as we got a sold rise from the 4640 level with nearly 100 points added by this morning. The FTSE100 bounced just above the 7450 level but has now solidly captured the 7500 level and is just testing the double top area at 7536 as I write this. As such we could well see a di[p and rise play out yet again, though the caveat for today is that we have the US CPI data out at 13:30 – so expect some choppy moves then.

The S&P will be keen to hold above the 4700 level for a push towards the 4750 level today and we may well see CPI be the catalyst for that to play out. Buy the dip remains the play really, at least til mid month which is seasonally when the bullish push runs out of steam.

The FTSE100 bulls will be keen to push past the 7536 level as that opens up a rise towards the top of the 10 day Raff channel (still heading up) at 7605 where we also have R3 – so looking fairly key for today. Round number as well so would expect a bit of a reaction here. Prior to that though we have 7550 as the key fib and may well see the bears have a go here prior to the CPI news.

Ideally we get an initial dip down to the daily pivot at the 7500 level and as with the S&P bulls they will be keen to defend the round number. 7498 is the daily pivot for today and a dip to test that would fit well. The 2h Hull MA is at 7492 though we climbed of that yesterday so not the cleanest test but could lend support.