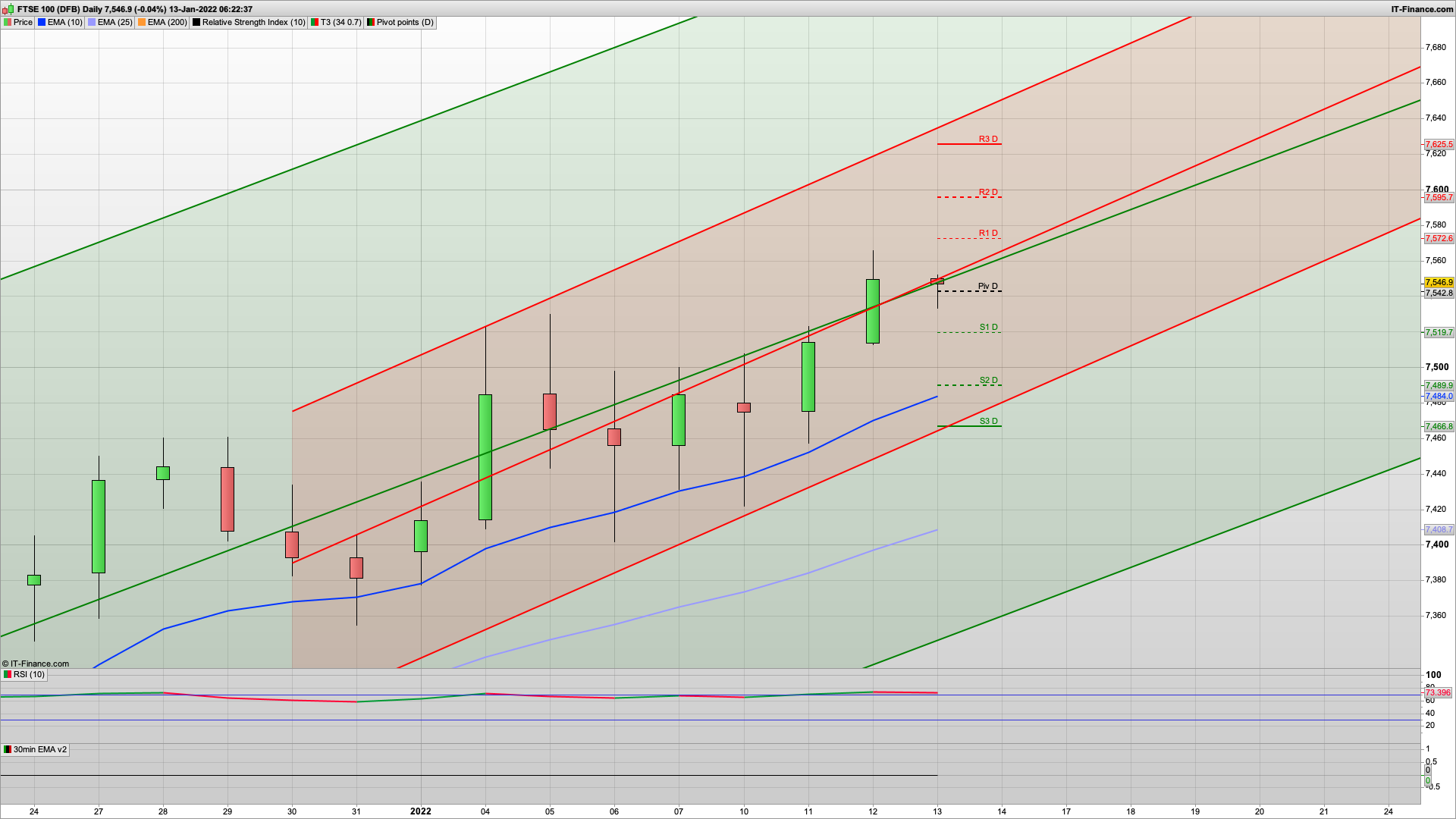 The FTSE 100 closed positive yesterday after another decent bullish session, led by mining and oil giants following a global rally in risk assets, while a slew of positive earnings updates including a forecast lift from supermarket group Sainsbury’s also aided the mood.

Meanwhile, Asia stocks were mixed Thursday after a U.S. inflation print intensified calls for interest-rate increases as soon as March.

Shares fluctuated in Hong Kong where a gauge of Chinese technology stocks fell after its biggest jump in three months. Japan declined. Chinese developers retreated as as some of the property sector’s more indebted firms face a wave of key payments this week. U.S. futures turned red after the S&P 500 and the Nasdaq 100 ended higher Wednesday.

A gauge of the dollar was steady. It had its worst session since May amid a muted reaction in Treasury yields and as much of the expectations for rate hikes have been priced in. The U.S. consumer price index climbed at the fastest pace since 1982, in line with forecasts.

Treasuries yields have surged this year on mounting wagers for at least three rate hikes from the Federal Reserve in 2022. Traders stuck to their bets for a rate hike in March after the inflation data.

The U.S. inflation read came after Fed Chair Jerome Powell vowed to contain the worst price pressures in four decades without derailing the economic recovery from the pandemic. In remarks prepared for a confirmation hearing before the Senate Banking Committee, Fed Governor Lael Brainard said tackling inflation and getting it back down to 2% while sustaining an inclusive recovery is the U.S. central bank’s most pressing task.

U.S. consumer prices accelerated at the fastest pace since 1982 in December, hitting an annualized 7% from 6.8% in November and bolstering expectations that the Fed will increase rates in March. Main drivers included food costs — up 6% year on year — and car prices, which jumped a record 20.9%. Fed Governor Lael Brainard said tackling inflation and getting it back down to 2% while sustaining an inclusive recovery is the U.S. central bank’s most pressing task.

The U.S. House of Representatives is preparing to move forward on a China competitiveness bill that would authorize billions of dollars in funding to boost U.S. research and development as well as aid for the domestic semiconductor industry. Some progressive groups have criticized the bill as too aggressively focused on competition with China — an approach they say could ignite a new cold war.

Buying the dips has certainly been the right play this week even with the CPI coming in at 7%, though the FTSE bulls didn’t really push on much past the 7550 resistance yesterday, managing just 7565 before the bears had a go. Likewise the S&P500 bulls couldn’t really crack above the 4750 level so that remains the line in the sand for the moment. Ergo, the FTSE bulls need to break above the 7555 level today as we have a red 30m coral there, to open up a possible test of the 7600 area.

Initially I am thinking that we will get a bit of a drop down towards the 7505 200ema level and also another test of the 2h coral. Will it be a case of buy the dip again today? I feel that it might be, if the S&P can defend the 4700 area as that is fairly key support for the moment.

It up to the bulls really today, they will need to defend any drops and we have S1 at 7519 to start with, and then the 7500 level. Should they break this though then a slide down to the 7466 level may well play out as we have S3 and also the bottom of the 10 day Raff channel here – though moving below 7500 might well throw the bulls off track for today. Likewise should the S&P break below the 4700 area then a slide down to 4660 S3 may well play out.

As mentioned previously, traditionally we continue the seasonally stronger period till further into the month so we should see a bit more upside yet.

For the FTSE100 bulls they will be looking to push past that 7565 level, then 7595 as mentioned. Above that then 7695 is the next daily level of note on the bigger picture, though 7635 is the top of the 10 day Raff channel. We are just at the mid point of that 10 day channel at the moment but it still remains heading up (hence the buy the dips for the moment).

With the various 30m corals going red on FTSE100, S&P500 and the Dax40 we should get an initial dip. You can see these levels on the charts below so worth shorting these if they get tested.