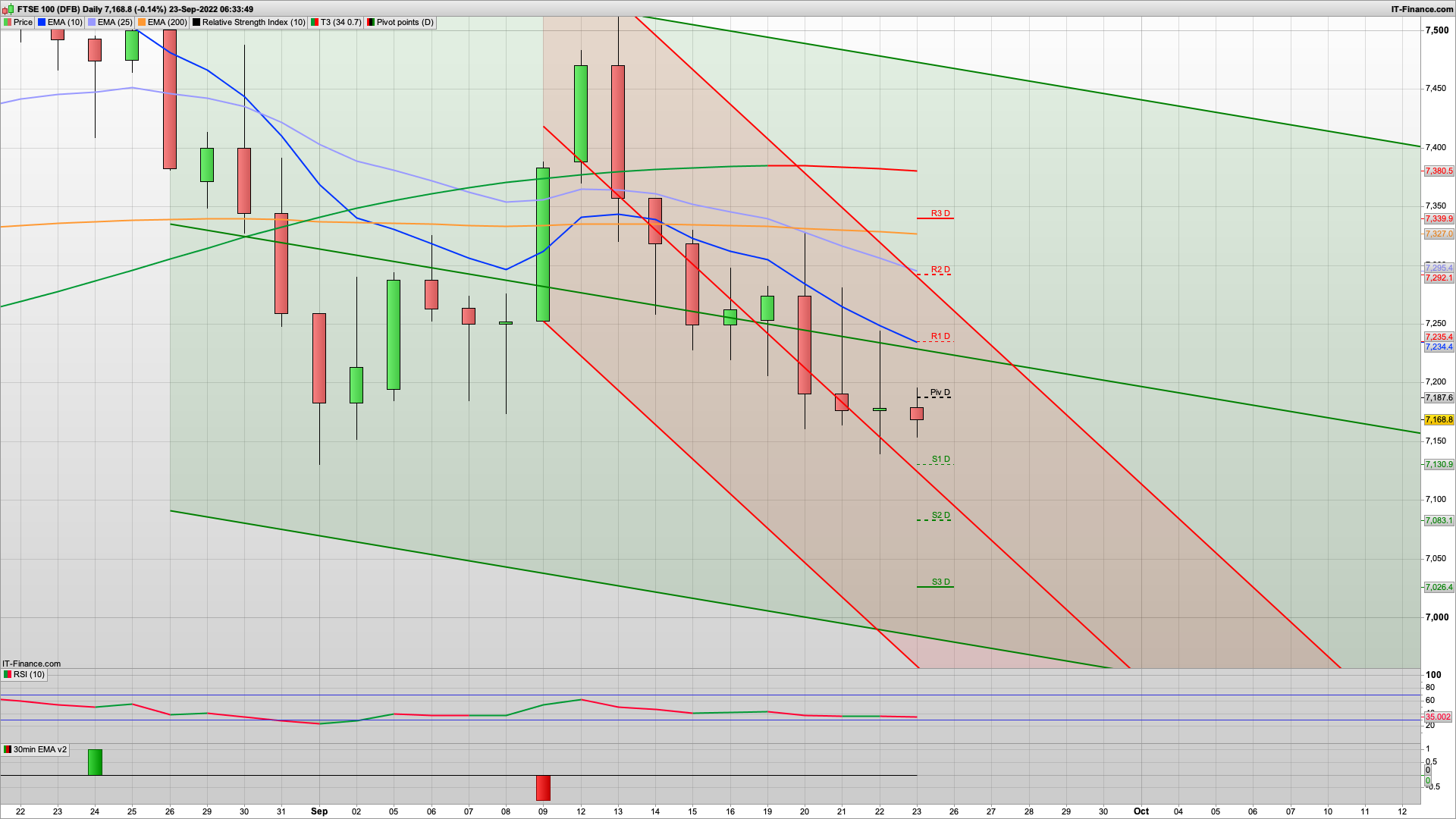 The FTSE 250 touched the lowest in over two months on recession fears after the Bank of England joined several global central banks in hiking interest rates to tame inflation. The blue-chip FTSE 100 closed down 1.1pc at a three-week low, while the midcap index, more exposed to the domestic economy, fell 2.1pc to its lowest since July 5.

Asian stocks limped toward a fourth straight weekly decline on Friday and bonds nursed big losses as investors scrambled to catch up with the U.S. Federal Reserve’s interest rate outlook, while currency markets were on edge at the end of a wild week.

Fed members’ projections for aggressive hikes and persistently high rates over the next year or so has unleashed another round of dollar buying that put other assets on the run.

World stocks hit two-year lows on Thursday and are down 3% this week. The euro and yen fell to 20-year lows and on Thursday, Japanese authorities stepped in to the market for the first time since 1998 to buy yen and arrest its slide.

Overnight, Wall Street indexes fell and longer-dated U.S. Treasuries were dumped – sending the 10-year yield up about 20 basis points to 3.71% – as traders tried to adjust to the prospect of U.S. interest rates above 4% for some time.

Interest rates are rising sharply almost everywhere in the world, with Britain, Sweden, Switzerland and Norway among hikers this week – driving heavy selling in European bond markets, particularly of gilts. But the Fed’s outlook has overshadowed that in the currency market as both safety flows and higher yields help the greenback, while an energy crisis and war on the doorstep weighs down the euro.

Sterling was parked by its lowest in nearly four decades at $1.1226. In commodity markets oil is eying a small weekly loss as rate hikes raise demand concerns. Brent crude futures hovered at $90.58 in Asia on Friday. Gold, which pays no income, has suffered as U.S. yields have gone up and it was last flat at $1,671 an ounce.

No End in Sight
This week’s blitz of interest rate hikes is unlikely to mark the end of a campaign by central banks to crush inflation even as they run the risk of driving their economies into recession. The biggest movers included Sweden’s Riksbank, which surprised with a mammoth 100 basis-point hike. Indonesia was more aggressive than expected and Vietnamsurprised with a rare tightening. In the US, the Fed’s aggression has brought an abrupt end to the pandemic housing boom, with prices in decline and a looming paralysis in the market.

Just the 50bps rate rise as expected yesterday but the bears still capitalised on it as the buy the rumour sell the news played out once again. Overnight we have tested and held the 7150 level though a break of this today will likely see a slide down towards the 7100 level.

Initially we may well see a bit of a kick up towards the daily pivot at the 7188 level, and possibly another overshoot as we have the 200ema above that at 7212. The bulls managed to push it quite well first thing yesterday but then lost the battle, as the momentum swings back to the bears.

The S&P bears are also still in control with a drop down toward the 3708 level looking distinctly possible today.

Been quite the week on the news front with the interest rate rises, and reading around more than a few articles are thinking the same as us and why increase rates just as the cost of living crisis gets worse. Sure there’s a reason, just not very obvious what it is (and its nothing to do with inflation)!

If the bulls break above the 7212 level then we have R1 at 7235 above that, along with the next daily level of note at 7238. It feels like we may well mimic the ASX200 action today which saw a steady decline. The powers that be seem keen to make the market movements fit the seasonal chart with the bearish second half of September!

Initial support as mentioned is at the overnight low and also key fib level of 7143, with the move down to 7110 if that goes. Again, they could drive it further and a test of S2 at 7083 may well play out.

If we do drop steadily then we could then see the late Friday pump from the USA later this evening, to salvage some strength prior to the weekend.

Generally it still looks like shorting the rallies is the right play as it has been all week.

Good luck today, and have a great weekend.