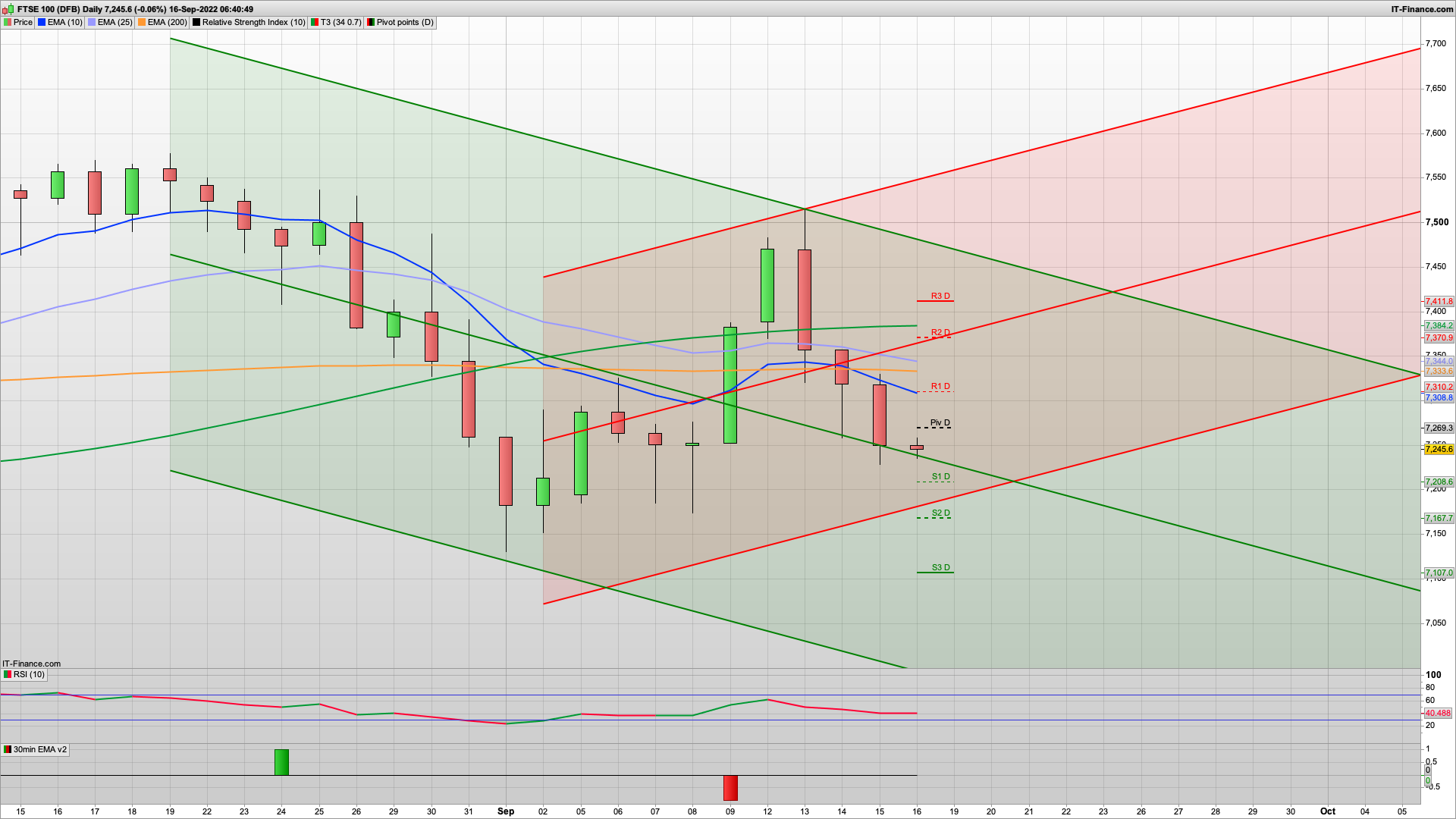 The FTSE 100 ended a volatile session flat as gains in banking and consumer stocks offset losses in energy shares. After two sessions of sharp losses, the blue-chip index paused as banks were lifted by bets of a 70pc chance that the Bank of England would deliver a 75-basis-point interest rate rise next week. While data on Wednesday showed that inflation surprisingly fell in August, a BoE survey said the British public’s expectations for inflation over the coming year rose to a record high last month.

Asian stocks headed for a fifth week of declines following more weakness in US equities and a surge in short-end Treasury yields that reflect bets for outsized Federal Reserve interest rate hikes. Asian markets were weaker as investors braced for a U.S. rate hike next week amid growing concerns of a global recession following warnings from the World Bank and the International Monetary Fund.

Shares fell in Japan, Australia and Hong Kong after the S&P 500 Index closed at its lowest level in about two months. Mainland China equities also slumped, with data for industrial production and retails sales that beat expectations having little impact on downbeat sentiment.

MSCI’s broadest index of Asia-Pacific shares outside Japan was down 0.3% on Friday, after U.S. stocks ended the previous session with mild losses. The index is down 4.1% so far this month.

The global economic outlook remains downbeat and some countries are expected to slip into recession in 2023, but it is too early to say if there will be a widespread global recession, the IMF said on Thursday

In comparison, the World Bank said the world could be edging towards a global recession in 2023 as central banks across the world simultaneously hike interest rates to combat persistent inflation.

The world’s three largest economies – the United States, China, and the euro zone – have been slowing sharply, and even a “moderate hit to the global economy over the next year could tip it into recession,”, it said.

‘Positive Energy’
Russian President Vladimir Putin told Xi Jinping he understands Beijing’s “questions and concerns” about his invasion of Ukraine, as the Chinese leader said the two countries could “inject stability and positive energy to a world in chaos.” In their first in-person talks since the war began, Putin hailed “the balanced position of our Chinese friends on the Ukraine crisis.” He also blasted what he called “provocations by the US and its satellites in the Taiwan Strait.” On Friday Indian Prime Minister Narendra Modi will meet with Putin and rub shoulders with Xi in Uzbekistan. But he walks a delicate tightrope thanks to close ties with Russia, a key supplier of weapons and energy, and India’s membership of the Quad security forum, alongside the US, Australia and Japan.