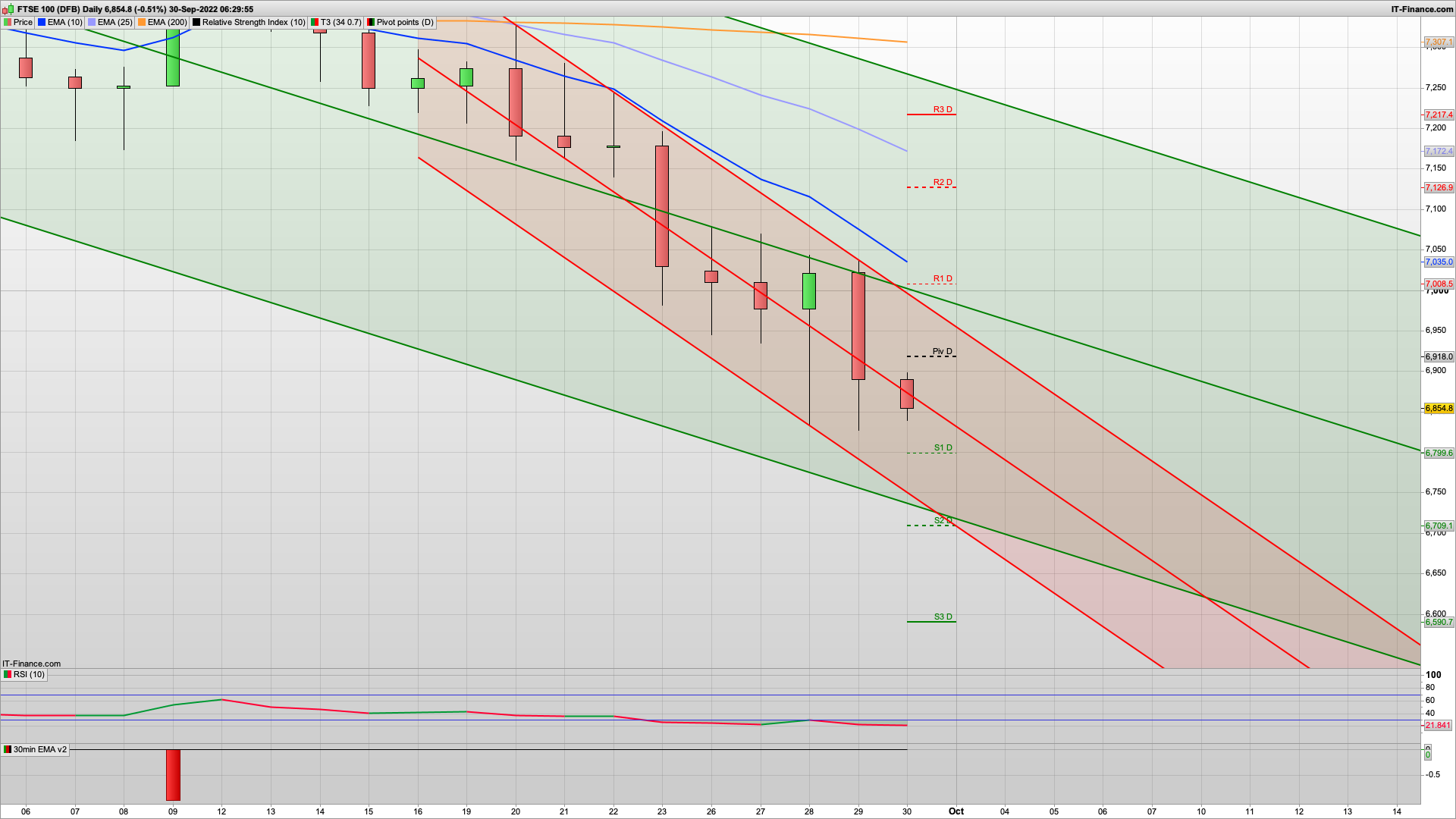 The pound’s rally early this morning saw it briefly erase all of its precipitous losses from last week following the announcement of the new government’s mini-Budget.

Sterling has gained more than 7pc from its all-time low of $1.0327 at the start of the week. In early Asian trade today it was sitting at $1.1168 – about the same level it was at before Kwasi Kwarteng began his speech last Friday, announcing the UK’s sweeping tax cuts. However, at around 4am it dropped down to $1.1092. According to strategists, the Bank of England’s bond purchases and the stabilisation of gilts yields were a big factor in soothing investor fears.

Asian shares on Friday were headed for the worst month since the onset of the COVID-19 pandemic, while jitters in currency and bond markets persisted over hawkish talk from central banks, worries about global recession and rising geopolitical risk.

MSCI’s broadest index of Asia-Pacific shares outside Japan was largely flat on Friday, as a bounce in Hong Kong and among mainland Chinese bluechips offset declines elsewhere. Japan’s Nikkei fell 1.6%.

Relief came from Chinese factory activity data that beat market expectations, with the manufacturing sector returning to growth in September after contracting for two months.

Still, the Asian index was set to record a staggering 12.5% drop for the month, the largest since March 2020 when the COVID-19 pandemic threw financial markets into chaos.

Hong Kong shares were likely heading for their worst quarter since 2001 and Chinese bluechips might also finish September by recording their biggest quarterly loss since a stock market meltdown in 2015.

In currency markets, traders remained edgy amid risk of intervening from central banks. The U.S. dollar was little changed against a basket of major currencies at 111.88 on Friday, after retreating 0.9% in the previous day.

However, it is up 2.9% for the month, the best since April. The relentless rise of the dollar has pushed the Japanese yen, Chinese yuan and many emerging market currencies to record lows.

Traders are also wary of possible intervention from China and Japan. Reuters reported that China’s central bank has asked major state-owned banks to be prepared to sell dollars for the local currency in offshore markets.

In Europe, Britain’s gilt market has been roiled along with the pound by government plans for heavy borrowing to finance spending.

Prime Minister Liz Truss said on Thursday she will stick to her plan to reignite economic growth, breaking her silence after nearly a week of financial market chaos.

German Chancellor Olaf Scholz also set out a 200 billion euro ($196 billion) “defensive shield”, including a gas price brake and a cut in sales tax for the fuel, to protect companies and households from the impact of soaring energy prices.

That came as Europe braces for a double-digit inflation reading later in the day, as the European Central Bank voiced support for another big interest rate hike. German inflation accelerated to 10.9% this month, far beyond market expectations.

A strong U.S. jobs market with weekly jobless claims hitting a five-month low adds to the case of more aggressive tightening from the Fed. Overnight hawkish comments from Fed officials offered no indication that recent foreign exchange and bond market drama will lead the central bank to back off from its rate hike course.

Further weighing on market sentiment, Russian President Vladimir Putin will begin annexing four Ukrainian regions to his country on Friday, a move the United Nations said would mark a “dangerous escalation” and jeopardise prospects for peace.

FED
Federal Reserve officials reiterated that they will keep raising interest ratesto restrain high inflation, as turmoil in Europe continued to fray investor nerves. It may have taken six months, but the Fed’s message is getting received loud and clear in the stock market where everyone from retail traders to smart-money speculators is pulling up stakes. The S&P500 fell as much as 2.9% overnight, while the Nasdaq 100 was dragged even lower by Apple, which took a 6.1% hit — equivalent to a $120 billion wipeout — after a rare analyst downgrade from Bank of America. The pain looks set to continue in Asia.

End of month and also quarter today so we may well see a dip and rise play out. Cable is climbing back a bit as expected from the recent lows – how far can it push on though is the question – maybe back to the 120 area next week….

The FTSE100 should get an initial kick up towards the daily pivot at the 6918 this morning as that would also be a test of the 2h resistance at the Hull MA at 6894 currently. Allowing for an overshoot then we could easily see the pivot. That said, we also have the red 30m coral for initial resistance at the 6879 level that the bulls will need to overcome.

Above that then 6960 comes into view as we have the key fib here, and then the 200ema just above at 6972. Should we get to this level then it looks a bit more bullish (and bodes well for a new month money kick up on Monday).

The bears meanwhile will be keen for a move down to the 6800 level where we have S1 and the round number. Below that then the bottom of both the Raff channels are at the 6730-6750 zone which would bode well for a bounce in this area (ultimate low?) and the October seasonality for a bit of strength to kick in.

The big question is if the PM’s measure’s will avert economic disaster (recession, repossessions, business folding, etc) despite what the general consensus is. Fed are still saying that they will aggressively raise rates, at least until they do a quick U turn and don’t! Quite often when the rhetoric is loudest is when you should start thinking they are likely to do the opposite!

The S&P500 has continued to drop off though the 3600 level may well be decent support today if seen. We have S1 here, and the round number so similar to the FTSE100 support.

With all the recent weakness all the Raff channels are of course heading down but if things start to stabilise over the next couple of weeks then we may well start to see some tentative bullishness kick in. Shorting the rallies for the second half September has been the right play, and still is for the moment. I wouldn’t be surprised if the BoE & the Fed suddenly announce that a rate rise may skip a month though…..

So, be slightly cautious today as its Friday, though look for a dip and rise to play out as the main theme.

Have a great weekend.