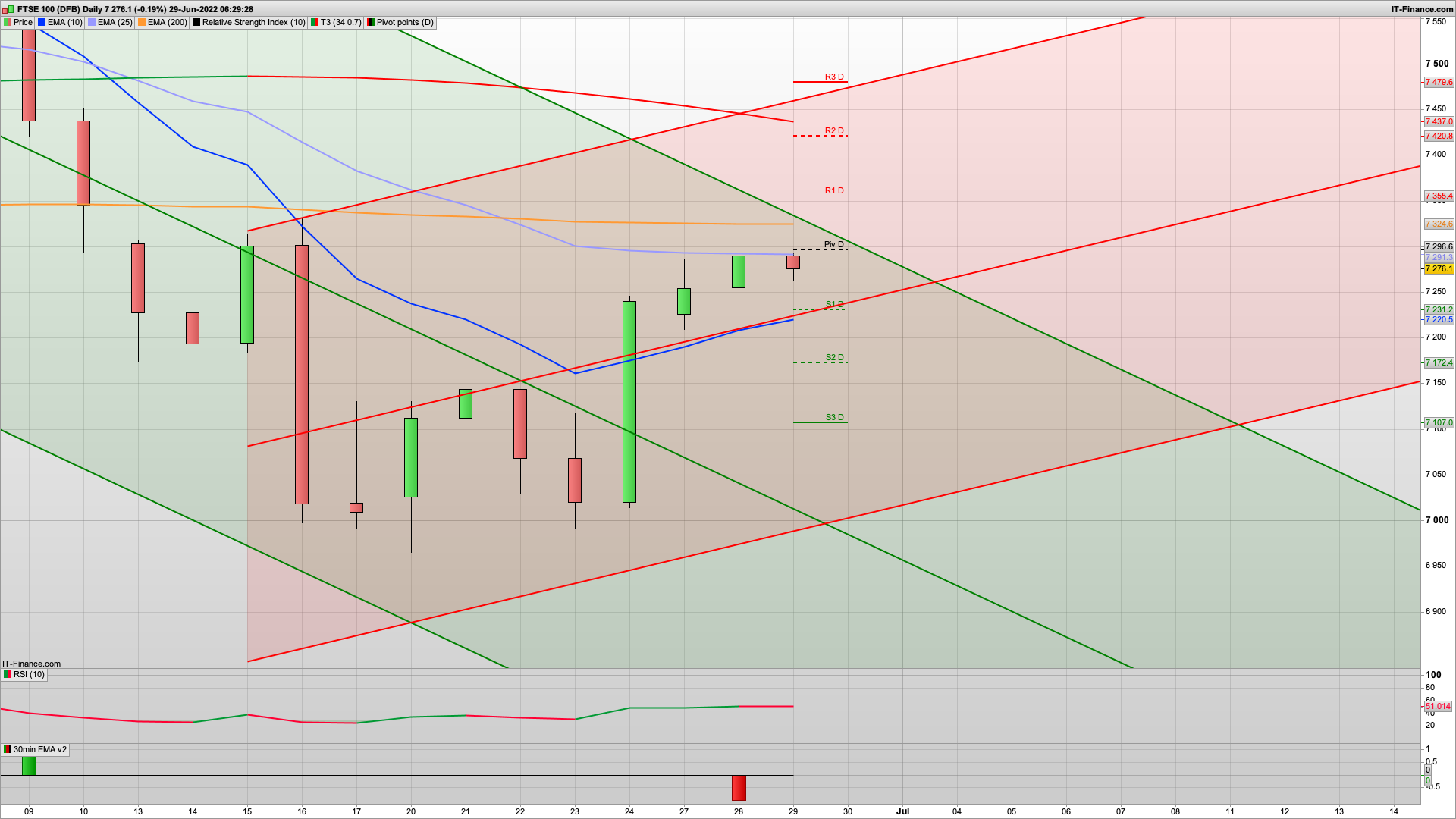 The FTSE 100 hit its highest level in more than two weeks yesterday, as commodity stocks led the gains after China’s decision to ease some Covid curbs boosted sentiment globally. The blue-chip index climbed 0.9pc to 7,323. Meanwhile, Scottish First Minister Nicola Sturgeon said the Scottish parliament would publish an independence referendum bill with a planned date for a vote on secession to take place in October 2023.

All was lost though as we got the rise and then the dip as expected, with the FTSE dropping, and the S&P500 tanking – shedding over 100 from then till now.

Stocks fell across Asia on Wednesday morning, extending overnight losses on Wall Street amid concerns over recession, inflation and high oil prices, which also boosted the safe-haven dollar. It followed yesterdays gloomy economic outlook as monetary policy tightens in much of the world to fight high inflation.

An Asian equity index snapped a four-day climb, shedding more than 1%. US futures steadied after a tech-led tumble in the S&P 500 on Tuesday. Institutional portfolio rebalancing may be impacting trading.

China’s bourses were in the red too but the losses were relatively modest. In a surprise move, the nation Tuesday reduced quarantine times for inbound travelers. That hinted at an eventual shift away from a strategy of stamping out Covid that involves great economic cost via lockdowns and travel curbs.

The dollar held gains after rising the most in over a week in the Wall Street session. Treasuries inched up, leaving the 10-year yield at 3.16%. Oil slipped toward $111 a barrel. In cryptocurrencies, Bitcoin continued to hover around the $20,000 level.

Investors appear skeptical that the Federal Reserve can avoid a bruising economic downturn amid sharp interest-rate hikes. Evaporating consumer confidence is feeding into concerns that the US might tip into a recession.

Expanding NATO
Finland and Sweden took a major step on their way to NATO membership after Turkey dropped its opposition to their bids, all but ensuring the military alliance’s expansion on Russia’s doorstep. The move “sends a very clear message to President Putin that NATO’s door is open,” NATO Secretary General Jens Stoltenberg said. Turkey agreed to support inviting the two Nordic countries into the military alliance, after receiving pledges from them addressing security concerns. Read more here on how the expansion shores up the alliance’s weakest flank. The news came after Russia defaulted on foreign debt for the first time since 1918 and as Russian President Vladimir Putin embarked on his first foreign trip since the invasion of Ukraine began.

Tech Rout
A rout in big tech weighed heavily on stocks, with gains in the broader market sputtering and Asia facing losses Wednesday, as a report showed Americans growing more downbeat about prospects for the economy. Those concerns overshadowed China’s surprise move Tuesday to reduce quarantine times for inbound travelers, which had lifted markets on hopes of a shift away from a strategy of stamping out Covid. Meanwhile Federal Reserve officials played down the risk that the US economy will tip into recession, even as they raise interest rates with another 75 basis-point hike on the table next month.

Well we certainly got the rise and dip yesterday with the S&P dropping off a fair bit to back below 3900. The FTSE100 meanwhile fell from 7360 and is back below 7300 overnight. That said I am thinking that we may well get a kick up this morning towards the 7310 resistance level where we have the 30m coral and just above the now bearish 2h Hull moving average.

Above 7310 then we have the key fib aligning with R1 at the 7355 level and worth a short here if seen, for a possible dip down to S1 (7231). The bears will be buoyed by yesterday’s drop so will feel stronger today, and shorting the rallies still remains the best play. Above 7355 them 7420 is next up, and also aligns with the daily coral, though I am not expecting it to get that high today.

The FED are still being touted as doing another 75bps rise too to further weigh on markets.

7330 is also the top of the 20d Raff channel for today and we are tracking that pretty well at the moment.

Meanwhile, the bears will be looking to break below the key fib at 7250, as that would likely see S1 and the 30m 200ema at 7230. The 30m chart is bearish to start with this morning (as you would expect!) and a dip and then rise would fit quite well, but only if the bulls can mount a defence at that support level.

The ASX200 had a dip and rise play out, and I am sort of expecting us to do the same, though it only managed to climb to its daily pivot before dropping off again.

So, basically shorting the rallies continues to be the plan for the moment for the larger moves, though a few bear market rallies/dead cat bounces also fit the mould!