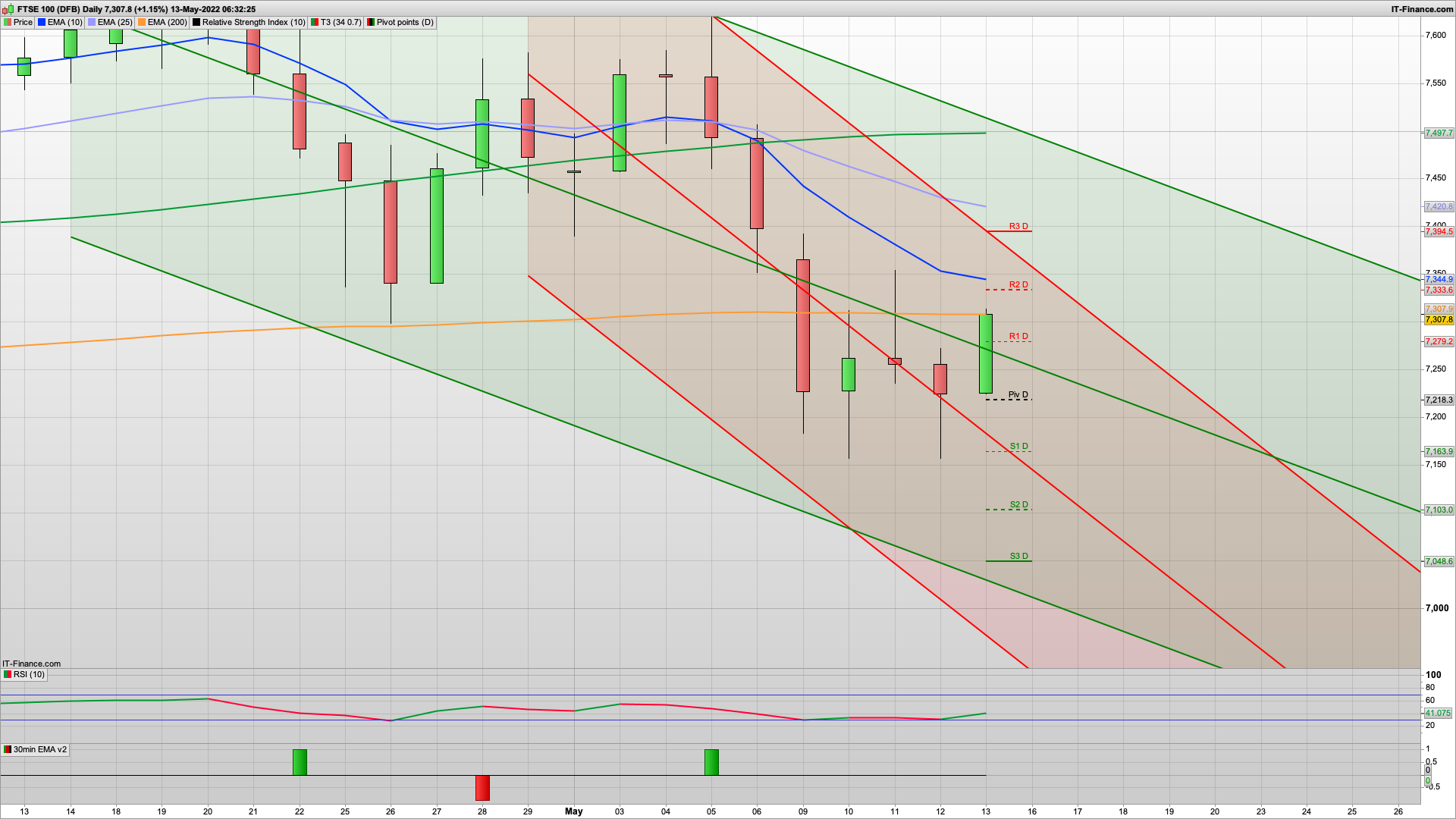 Stocks rose Friday after Federal Reserve Chair Jerome Powell again pushed back against speculation of steeper interest-rate hikes and as cryptocurrencies rebounded from a plunge that has captivated markets.

An Asian share gauge climbed over 1.5%, aided by rallies in technology stocks in China and Japan, where SoftBank Group Corp. surged. US and European futures advanced after an intraday rebound left the S&P 500 little changed.

Abating panic in the highly speculative cryptocurrency market may be helping sentiment. Bitcoin added about $1,700 to top $30,000.

Powell reaffirmed the Fed is likely to raise rates by a half point at each of its next two meetings and isn’t “actively considering” a 75 basis-point move.

A dollar gauge dipped but remains on course for its longest streak of weekly gains since 2018. Treasuries gave back some of their recent rally, taking the 10-year yield to about 2.89%. The yen retreated.

Powell left open the possibility of doing more if needed to get high inflation under control. Concerns that tightening monetary policy will spark an economic downturn continue to shadow markets and have tended to snuff out rebounds. China’s Covid lockdowns and Russia’s war in Ukraine have also roiled a range of assets this year, leaving world shares near a bear market.

Gas
Germany’s economy minister has accused Russia of “weaponising” energy supplies as he described new sanctions imposed by the Kremlin as an escalation. A subsidiary of Gazprom that was seized by Germany last month is no longer receiving gas supplies from Russia after Moscow launched a retaliation against European sanctions.

Robert Habeck said the move showed Russia was using the stand-off over energy as a “weapon”, adding that it seemed designed to drive up prices. European natural gas prices surged 22pc amid the clash, with markets also rattled by a drop in Russian supplies after Ukraine was forced to shut a key transit point as a result of the war.

Calm Descends
The implosion of the TerraUSD stablecoin kindled wide-spread panic in the crypto space, but 24 hours later, things have calmed down significantly.
Terraform Labs halted and then restarted its Terra blockchain in the wake of the collapse of TerraUSD and its related Luna token. Tether, the largest stablecoin used in cryptocurrency markets to facilitate trading, recovered from a mini-crash, soothing frayed trader nerves that its troubles might spill into the broader market. And Bitcoin rose as much as 6% to trade around $30,000. Such was the concern over the crypto crash that US Treasury Secretary Janet Yellen weighed in to say Terra’s crash underscores the dangers of tokens that purport to be pegged to the US dollar, and called for new regulations in the arena.

Nice hold of the 7160 level yesterday for a decent double bottom for the week and a decent potential W pattern playing out nicely the daily chart bodes well for a bit more upside. The S&P bulls have broken the 3950 resistance overnight and could well set up a push towards the 3995 level now where we have decent resistance. That may well see the bulls on the FTSE100 go for a push towards the 7390 level where we would coincide with Monday’s high and the next daily resistance level.

Initial resistance is at the R2 level of 7333 this morning and with the overnight rise we could well see an initial dip down to test the key support at the 7263 key fib level and also the 25ema on 30m chart. If the bulls are going to copy the bullish trending day that the ASX200 put in today then they need to defend tis level for the push back towards 7333.

Below 7265 then we would be looking at a slide down to the 7185 area where we have the Hull MA on the 2h, though we have already had one decent bounce off this yesterday since it went bullish on Wednesday. That said, there is decent 30m support with a green coral and the daily pivot both aligning at the 7218 level, so should we dip here then a long here is also worth a go. The coral lines have been working well this week on the various timeframes for support and resistance.

If the bulls can break above the 7380 level then 7394 is R3 and round number 7400 too. They would be looking to end the week strongly then, and we may well get a late US pump again as well. That could see the S&P close back above 4000 and allay some of the fear that is in the market at the moment.

S&P500
The 2h chart is now nicely bullish, with support at the 3900 level along with the 3920 level as the daily pivot and the now green 30m coral. As such, we should see a bit of bearish action around this area. They have broken above the 3950 level overnight in a positive sign for a push higher today. We are just on R1 as I am writing this at 3974 so an initial dip down from this would make sense.

So, we may well see a bit of bullishness today (famous last words!) though as its Friday always stay a bit more cautious. Been a decent week so don’t let Friday ruin it as it so often does. Good luck today and have a great weekend.