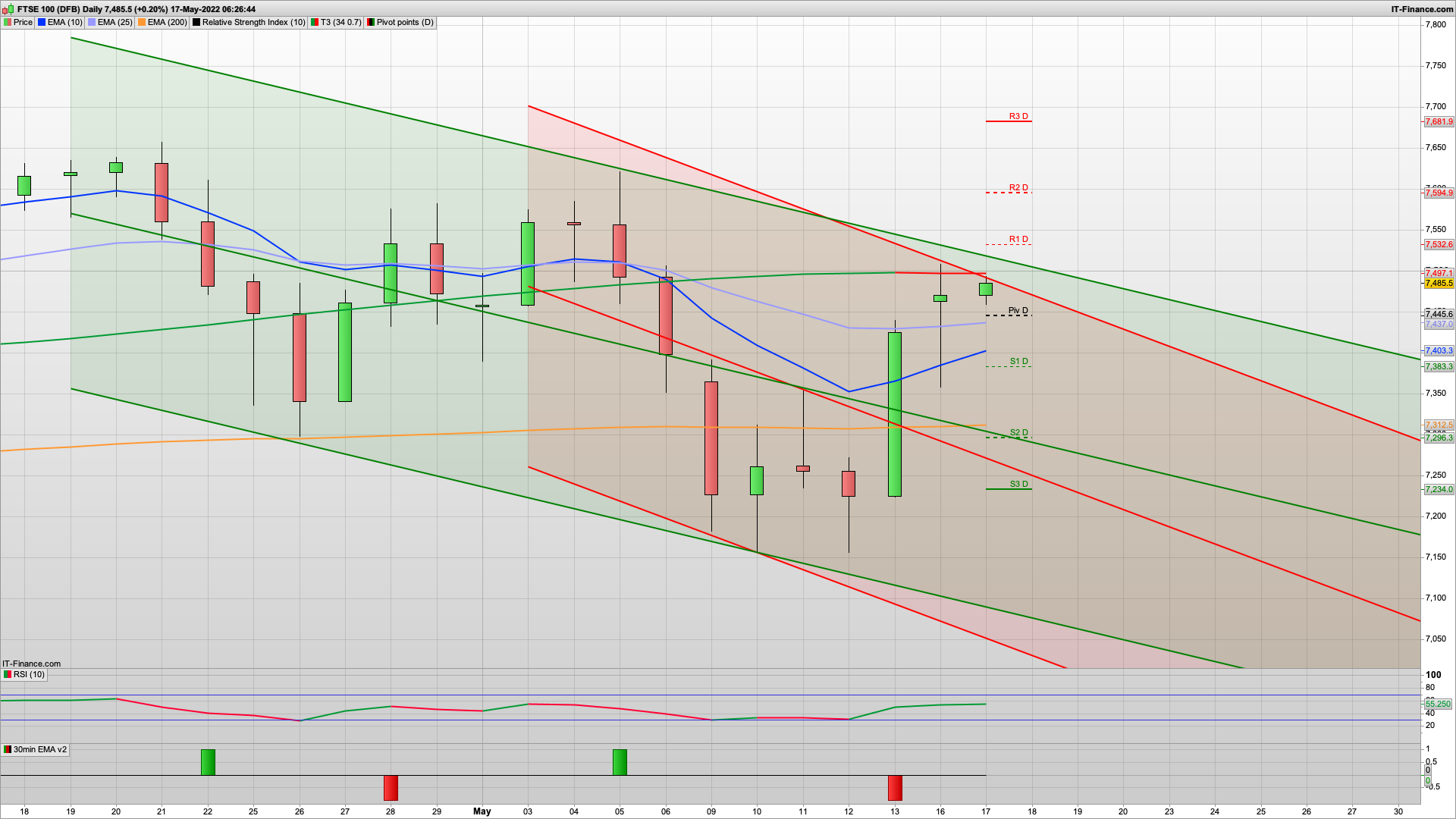 The FTSE 100 recovered Monday to make solid gains, despite wider concerns over a slowdown in consumer activity in China. The index ended the day up 0.6% at 7,464, helped by commodity stocks such as Fresnillo, Glencore and Antofagasta.  A lovely long for us at 7365 rode all the way to the 7495 target area after hours, which then saw the bulls stall.

In other slightly pathetic news, the Governor of the Bank of England has claimed that policy makers have been left helpless in the face of surging inflation. Appearing in front of MPs Monday afternoon, Andrew Bailey admitted he’d felt helpless to control soaring prices amid an energy market shock and the war in Ukraine, adding: “It’s a very, very difficult place for us to be in.”

Fellow Monetary Policy Committee members Dave Ramsden and Michael Saunders said external factors contributed around 80pc of the recent inflation surge and insisted that even if the Bank had raised interest rates more aggressively, it’s unlikely inflation would have fallen back to the target of 2pc. The hearing comes amid a slew of attacks by senior Tory MPs on the Bank of England for its handling of the cost-of-living crisis.

Asian stocks rose Tuesday amid a jump in some technology firms and as investors assessed China’s efforts to stamp out Covid.

An Asian share index rose for a third day — it’s longest winning streak since mid-March. US and European futures bounced back after a Wall Street drop.

China’s tech companies jumped on optimism Beijing may ease up on a yearlong clampdown following a meeting between regulators and corporate giants.

Meanwhile, Shanghai reported three days of zero community transmission, a milestone that could lead officials to start unwinding a punishing lockdown. Flareups elsewhere in China showed how hard it is to tackle the omicron strain.

A challenging global economic outlook amid elevated food and fuel costs and tightening monetary settings continues to shape sentiment. Oil has jumped to about $114 a barrel and an index of agricultural prices is at a record high.

US data Monday showed New York state manufacturing activity unexpectedly shrank in May for the second time in three months. That followed Chinese figures revealing a collapse in economic activity due to Covid-linked curbs.

The economic reports have fanned concerns of a downturn in the global economy alongside persistent price pressures that are forcing the Federal Reserve and a slew of other central banks to tighten monetary policy.

Tech Sinks
US stocks fell back toward session lows in the last hour of trading as investors assessed the latest signs of economic malaise in the US and China. A slide in major tech firms like Tesla and Amazon left Wall Street in the red.

Paying the Price
China’s economic activity is collapsing in the face of tough Covid Zero rules, with industrial output and consumer spending sliding to the worst levels since the pandemic began. And it’s not only China that’s suffering. Hospitals from the US to Australia are wrestling with a shortage of chemicals used in X-rays, building projects in the US are being held up by delayed materials and Vietnamese clothing makers are struggling to fill orders as Chinese supplies dry up — and that’s just for starters. So what’s the problem? China’s exit from the Covid swamp hinges on the elderly getting vaccinated. And yet, after all this time, more than 40 million seniors still haven’t had a single shot.

That was a good day yesterday with the rise for the long from 7365 and the bulls have managed to hold on almost at the 7500 level. For today we may well see a dip and rise play out as we retrace a bit of that rise, especially as we are now testing the top of the Raff channels and also the red daily coral at 7500.

Initial resistance remains at this level to start with, and then the R1 level at 7532 above this. The bulls will obviously want to continue pushing on, which is why I am thinking that we may well see a bit more buy the dip today if we do so. Above this then there is some daily resistance at the 7557 level, with a push towards the 7600 level probably on the bulls radar.

If the bulls were to break above the 7535 level then we will see a breakout above the Raff channels which bodes well for a continued push higher over the next few sessions. At least the FTSE100 ignored the BoE governor yesterday who basically admitted that they have lost control and it’s now everyman for himself (or woman/herself!).

Cable has staged a bit of a recovery as well, rising to the 12350 level which may suppress early FTSE100 exuberance.

For the bears, they will be looking to take the FTSE100 down to the daily pivot at the 7445 level which should in theory be decent support. This was a bit of a breakout level yesterday as it was daily resistance so a backtest of that failed level would make sense.

Below this we have the 7400 level with the key fib level, then the S1 and 200ema at 7376. That would be pretty bearish today to see that low so I don’t think we will get there unless some news driven move, and we are more likely to remain above the 7440 area on any dips.

S&P500
Coming into resistance once again at the 4045 level, and this got the reaction last night. Again we may well see a dip and rise play out, and I am looking at the 4004 level as initial support. 3990 held well yesterday for the the initial long, though the bulls were a bit slow to get going. If we do get a rise towards the 4042 R1 level (4046 for the key fib) then we may well see the bears appear here again. Below the 4000 level then 3975 is the next major support.

Dax40
14090 key fib resistance to start with so a drop from here down to the 14000 area where we have the daily pivot and the 30m green coral, along with the 2h Hull MA, would make sense. If the bears go for it then a break lower to the next major support at the 13875 level could play out, though that may be a bit too bearish for this morning. Above the 14090 then the bulls will be looking at R1 14144, then R2 14275, both levels that tie in with the top of the 20 and 10 day Raff channels respectively.