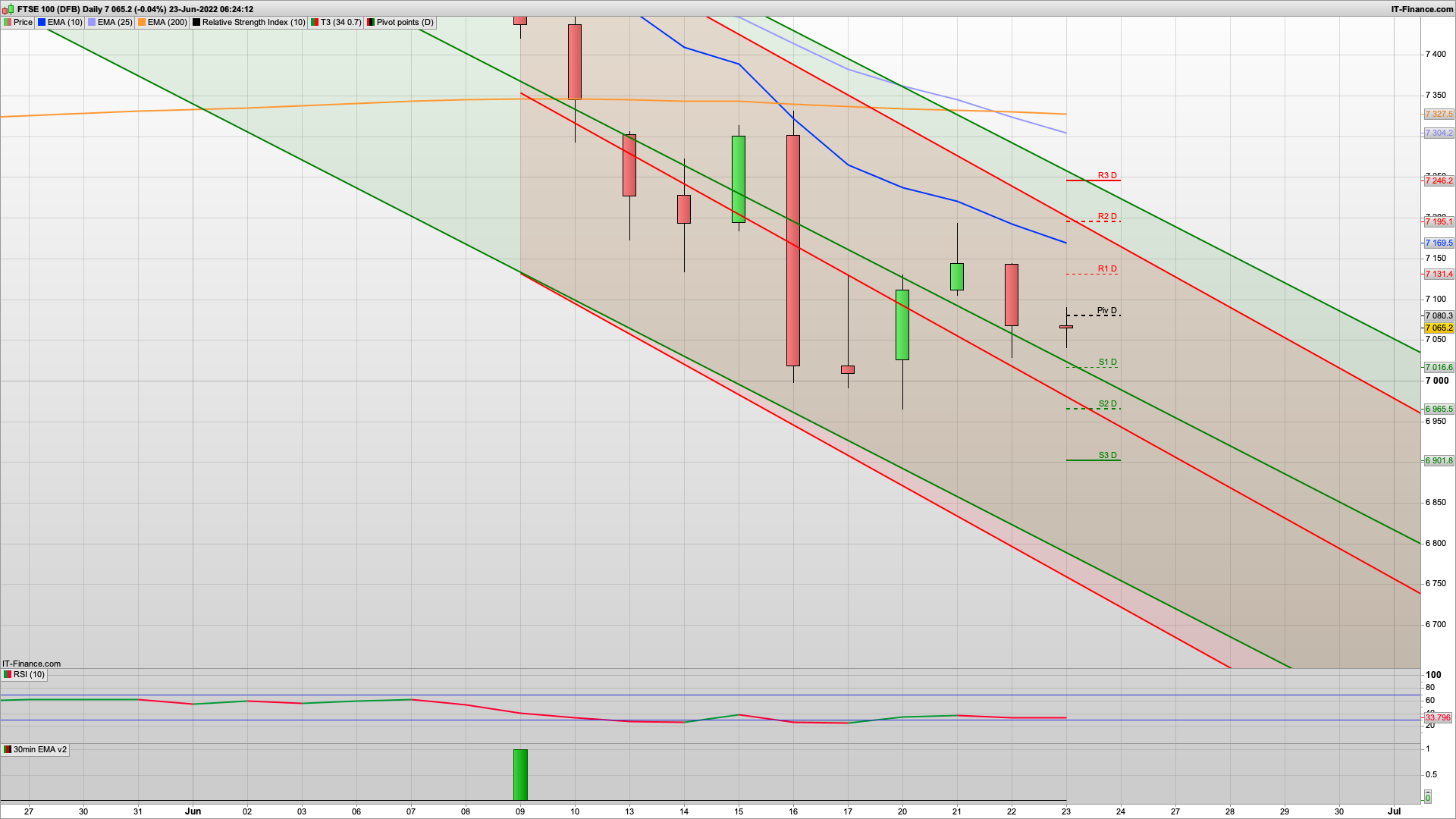 The FTSE 100 closed in the red on Wednesday after traders digested another 40-year-high for UK inflation levels. A consumer price index inflation reading of 9.1pc was in line with expectations for May, but rocketing producer prices showed inflationary woes are not likely to reverse any time soon. The FTSE 100 ended the day down 0.9% at 7,089.

Asian shares wobbled while commodity prices fell on Thursday as mounting worries about the risks of a global recession amid aggressive rate hikes by the Federal Reserve kept broad investor sentiment fragile.

MSCI’s broadest index of Asia-Pacific shares outside Japan reversed earlier gains to be mostly flat in Asia trade. Stocks in South Korea were off, while Japan’s Nikkei  was broadly unchanged.

Overnight, the dollar fell alongside U.S. Treasury yields after Fed Chair Jerome Powell, in testimony to the U.S. Senate Banking Committee, acknowledged a recession was “certainly a possibility”, but the Fed is not trying to engineer one.

A Reuters poll showed the Fed will deliver another 75-basis-point interest rate hike in July, followed by a half-percentage-point rise in September, and won’t scale back to quarter-percentage-point moves until November at the earliest.

Australia’s manufacturing activity held steady this month, data showed on Thursday which, together with Japan’s figures, come ahead of a string of European and U.S. purchasing managers’ index (PMI) surveys due out later in the day.

The readings will be closely scrutinised as financial markets fret over sharp interest rises by the Federal Reserve, and further aggressive tightening planned over coming months, which have substantially raised the risk of a U.S. recession.

Recession Risk
Federal Reserve Chair Jerome Powell gave his most explicit acknowledgment to date that steep interest-rate hikes could tip the US economy into recession. Testifying before the Senate Banking Committee, Powell said the other risk was not being able to get inflation under control. Economists are increasingly flagging the likelihood of a downturn within the next two years. Powell told the hearing that officials “anticipate that ongoing rate increases will be appropriate” to cool the hottest price pressures in 40 years. Meanwhile inflation in the UK hit new 40-year high, with further gains expected.

The FTSE100 remains pretty choppy for the moment but is holding on above the 7000 level. If the S&P bulls kick in and manage to break above the 3800 level then we may well see some further upside towards the 7200 level and possibly higher. For the moment though its remaining below the 7100 level!

I would like to see 7020 hold, and also a bit of a bullish effort from he US for a push higher after that. Whether we actually see that though remains to be seen!

Above the 7108 then R1 is at the 7131 level and then 7195 for R2, and ties in with the recent high and just below the 10d Raff channel at 7200. I still like this area for a bit of a bearish reaction though having dropped off the 7195 already on Tuesday, and got down to 7030, we may have already had the “proper” reaction off this level. Second one might not be as large a move.

Below 7016 and the bears will be aiming to break the 7000 level, and then 6965 which was the recent low, and also aligns with S2 for today. Below that then S3 at 6901 is next up but that would be quite the bearish session, on a. day when not looks like the S&P might well tick up. And that should pull the FTSE100 higher as well.

So looking like a bit of a dip and rise sort of day and lets see if 7-20 area holds as support on any dip.