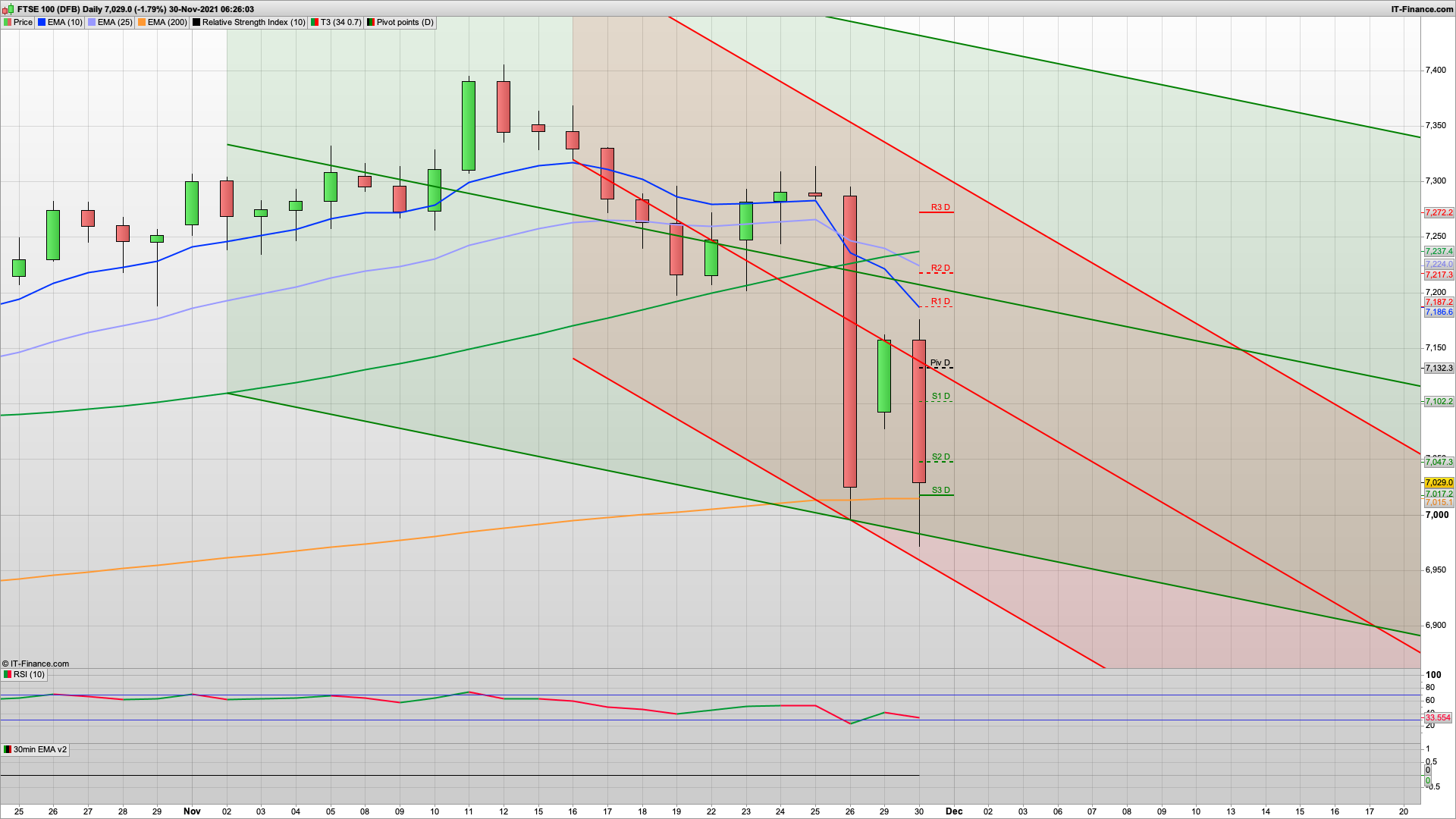 Stock markets rebounded on Monday following an omicron-induced crash on Friday. Traders were spooked by new travel restrictions around the world that sent oil prices sliding. The efforts announced by vaccine makers helped stocks regain ground, along with a statement from the World Health Organisation indicating that omicron’s symptoms appear to be mild.

The FTSE 100 ended almost 1pc higher, with Shell and BP among the biggest risers, while the S&P 500 erased its November losses, led by gains in technology and retail shares.

Wall Street traders added more than $15bn to Moderna’s value after it confirmed that a new vaccine targeting the omicron strain of Covid would be ready by early next year if needed. The 11pc increase to $366 means its shares have soared by almost a third in the space of two trading days in New York.  The drug maker is now the best performer on the S&P 500 this year and is worth almost $150bn, although that is still only half the value of rival Pfizer.

Asian stocks fell along with U.S and European futures Tuesday while Treasuries advanced as concerns about the omicron virus strain filtered through markets again. MSCI Inc.’s Asia-Pacific gauge turned lower after Moderna Inc.’s head told the Financial Times that existing vaccines will be less effective at tackling omicron and it may take months before variant-specific jabs are available at scale.

Mixed Messages
Omicron’s got everyone in a spin, but still no one can tell us just how bad the new variant could prove to be. Its arrival may have lifted healthcare stocks and hobbled shares of travel companies, but as the dust settles market analysts are sounding a note of cautious optimism — here’s what they have to say. Meanwhile, Fed chair Jerome Powell is erring on the side of caution, with a warning that the variant does add to economic risks, while the World Health Organization is calling on member states to start testing widely for the new variant, saying it could fuel future surges with severe consequences. However, the South African doctor who first alerted authorities to the new strain said its symptoms were different to those of delta and that she thinks it will be a mild disease. Until we know more, Joe Biden’s message may be the one to heed. He described omicron as “a cause for concern, not a cause for panic.”

Well this is a bearish start to today with the 6980 20d Raff channel bottom being tested. As a positive it has held so far and we have seen a bounce back above 7000, along with a decent bounce off S3 on the S&P500 overnight, at 4587. News that vaccines aren’t effective but the new Moderna one due out in the next month or two should be fine fuelled that move. Said by…….. Moderna’s CEO! Still think it’s a positive that the symptoms are mild as far as we know. It’s deaths and hospitalisations that matter, not cases really, imho.

Bottom line is that there are unknown knowns with this variant, and probably some known unknowns too! I wouldn’t be surprised if we see a bit of a bounce initially today but then maybe some more downside later as the usual bear Tuesday kicks in. The S&P failed to break through the 4670 resistance yesterday which was the 2h red coral line, but the moving averages were bullish till that news broke.

The S&P500 bulls will be keen to defend any further tests of that overnight low and S3 and at the same time push past the 4670 resistance if they can.

So for the FTSE, we have bounced again off the 200ema on the daily and the bottom of the 20d Raff, and could get a rise towards a backtest of the key fib at 7088. Above that then I am looking for a bearish reaction at the 25ema on the 30m at 7115, but could see an overshoot to the daily pivot and coral line at 7133. If we do get this then we may well see the bears mount another assault here for a run down, which if this news starts to stick could see a drop down to 7000 or lower again.

Above 7135 then 7185 is the next key area with the key fib and 200ema here on the 30m, though that may be a big ask today. With Covid news has come volatility though so can’t really rule any big swings out completely.

For the bears they will be looking to break the 7000 round number again, and also the overnight low at 6973. That will likely lead to 6950 if they do, as we have the bottom of the 10 day Raff channel here. Further downside would be a slide to 6900, but with these drops the daily chart is a bit oversold now. News and sentiment will drive it so anything positive on the Omicron front will get the bulls piling in. Stay nimble really!

All three of my watchlist markets tested key round numbers this morning – 4600, 15000 and 7000 – at the same time which is quite rare and has also triggered some bounces. We could of course see a bit of a pump and dump today as the longs from yesterday look to get out later on.

So, going to be another choppy session I expect – look for those lower supports to hold again and bank profits quickly and get stops to breakeven as usual to get risk free. Good luck today.