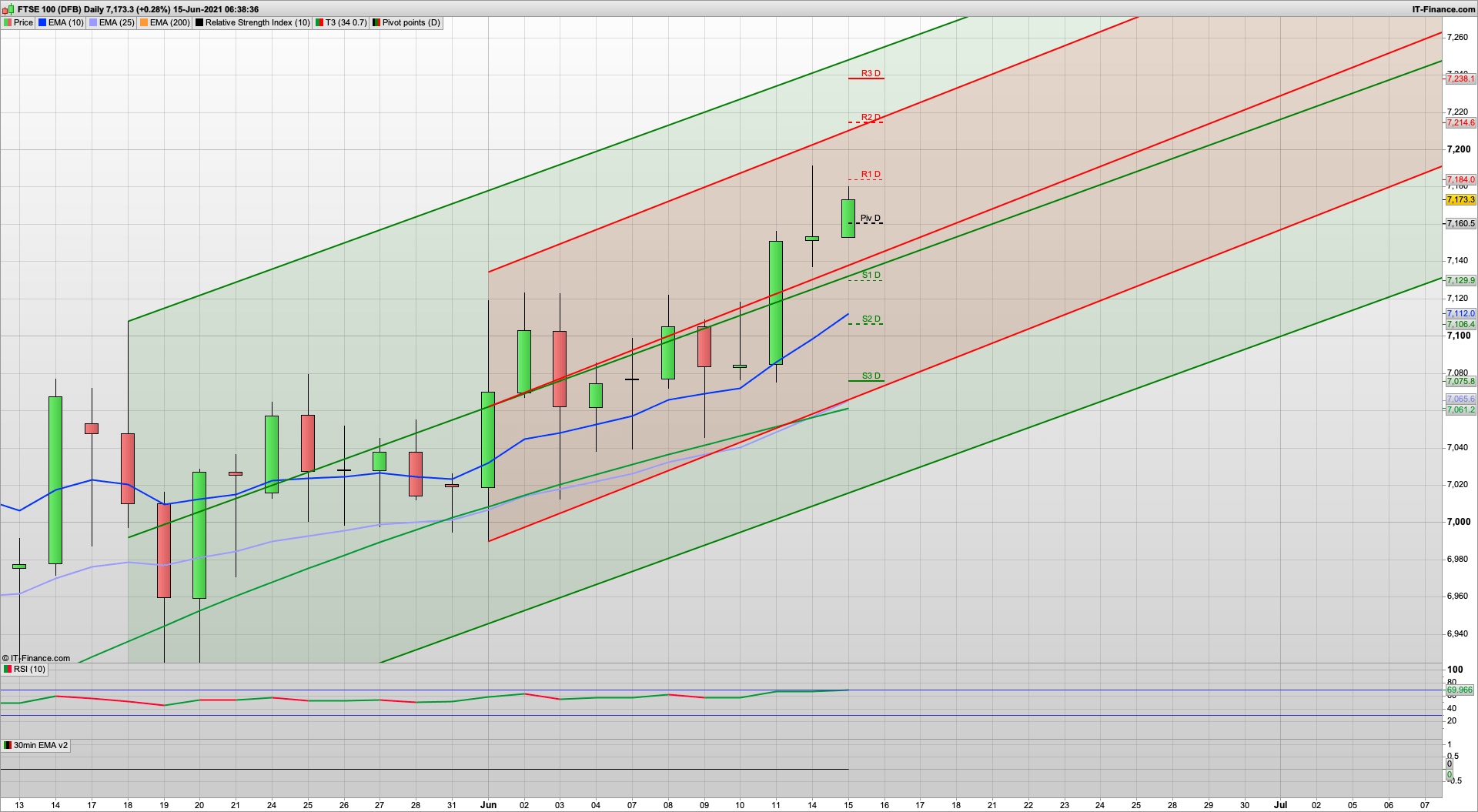 Cheeky spike up to the 7191 level yesterday but we got the dip after that and the 7140 level held well. Those in the chat room saw that the 4234 S&P support level was the next main support and that was tested and held extremely well for a 30 point bounce late in the day. That 4234 level may well be the short term low and we see a bit of buy the rumour sell the news today/tomorrow ahead of the FOMC tomorrow. 4265 is the resistance level to watch though and we are nearly there.

Initially I am thinking that we may well see a dip from this 7180 level towards the main support area to start with at 7160 where we have the daily pivot, 30m coral now green, and also the 25ema on the 30m chart. 7147 is also the 2h support with the Hull moving average here – as such the bulls will be looking to defend both of these levels if seen.

A break of 7148 and we will likely see a slide down to 7126 to have a test of the 30m 200ema and just above the key fib level at 7116. Also got a cam break out level here and just below the green coral on the 2h chart. I dont think that we will get that low today though, and we will likely follow the ASX200 pattern and dip and rise. Oil price rises are certainly helping the FTSE at the moment, and if cable drops off a bit that will also help. Cable is holding steady around the 141 area at the moment.

Above the 7180 level (7184 for R1 too) then the bulls will be looking at 7214 as the next cluster of resistance levels are there being R2 and the key fib and also the top of the 10 day Raff channel. I am expecting the bears to have a go here, but above this then the R3 level 7238 would be tested (and just below the top of the 20d Raff at 7248). That might be a bit of an ask though on the day ahead of the FOMC but bear it in mind.

So, generally it looks bullish again, the S&P bulls will be keen to capitalise on the bounce from 4234 and keep that going today – buy the rumour sell the news in play, but they need to break 4265 as we have initial resistance here.

Oil majors tracked rising crude prices on Monday to push to the top of the FTSE 100, helping markets to reach a fresh pandemic high.

Royal Dutch Shell ended as the best performer on the benchmark, adding 34p to £13.93, followed closely by BP, which gained 6.1p to 330.4p. On the FTSE 250, Tullow Oil led the risers as it added 5.2p to reach 64.8p, its highest level since December 2019. It came as oil prices bounced amid an improved outlook for worldwide fuel demand, with Brent crude reaching $73.64 per barrel – the highest level since April 2019.

Reports that Shell is considering the sale of shale assets in Texas, which could offer proceeds of $10bn (£7bn), also acted as a tailwind.

After breaking above the 7,000 mark in mid-April, the FTSE 100 has oscillated in a narrow range on worries that a resurgence in coronavirus cases might delay the reopening. The biggest losers were dominated by travel, leisure and hospitality stocks, which took a beating as the Government confirmed plans to hold off the fourth stage of its roadmap out of lockdown for another month. Traders were concerned about a lack of extended financial support despite the delay.

Asian stocks traded mixed Tuesday after their U.S. peers closed at a record and a bond rally stalled ahead of a key Federal Reserve meeting. Commodities retreated.

Japanese shares gained, while Australian stocks outperformed after a holiday. Benchmarks in China and Hong Kong fell, as they too reopened after a break, amid a slide in metals prices led by copper. U.S. futures edged higher after gains in technology shares pushed the S&P 500 to a record Monday. Still, three stocks fell for every one that rose. The 10-year Treasury yield pulled back under 1.5%, while the dollar was steady.

Bitcoin continued to gyrate amid a barrage of comments, briefly climbing above $41,000 only to pull back. The digital currency got a boost after veteran hedge fund manager Paul Tudor Jones re-endorsed the coin in a television interview.

Investors are awaiting clues from the Fed about a timetable for scaling back emergency monetary stimulus after a pullback in bond yields eased tapering concerns. Expectations are that the central bank will reaffirm the pace of bond purchases this week, even if it delivers projections for interest-rate liftoff in 2023, according to economists surveyed by Bloomberg. The decision is due Wednesday. [Bloomberg]