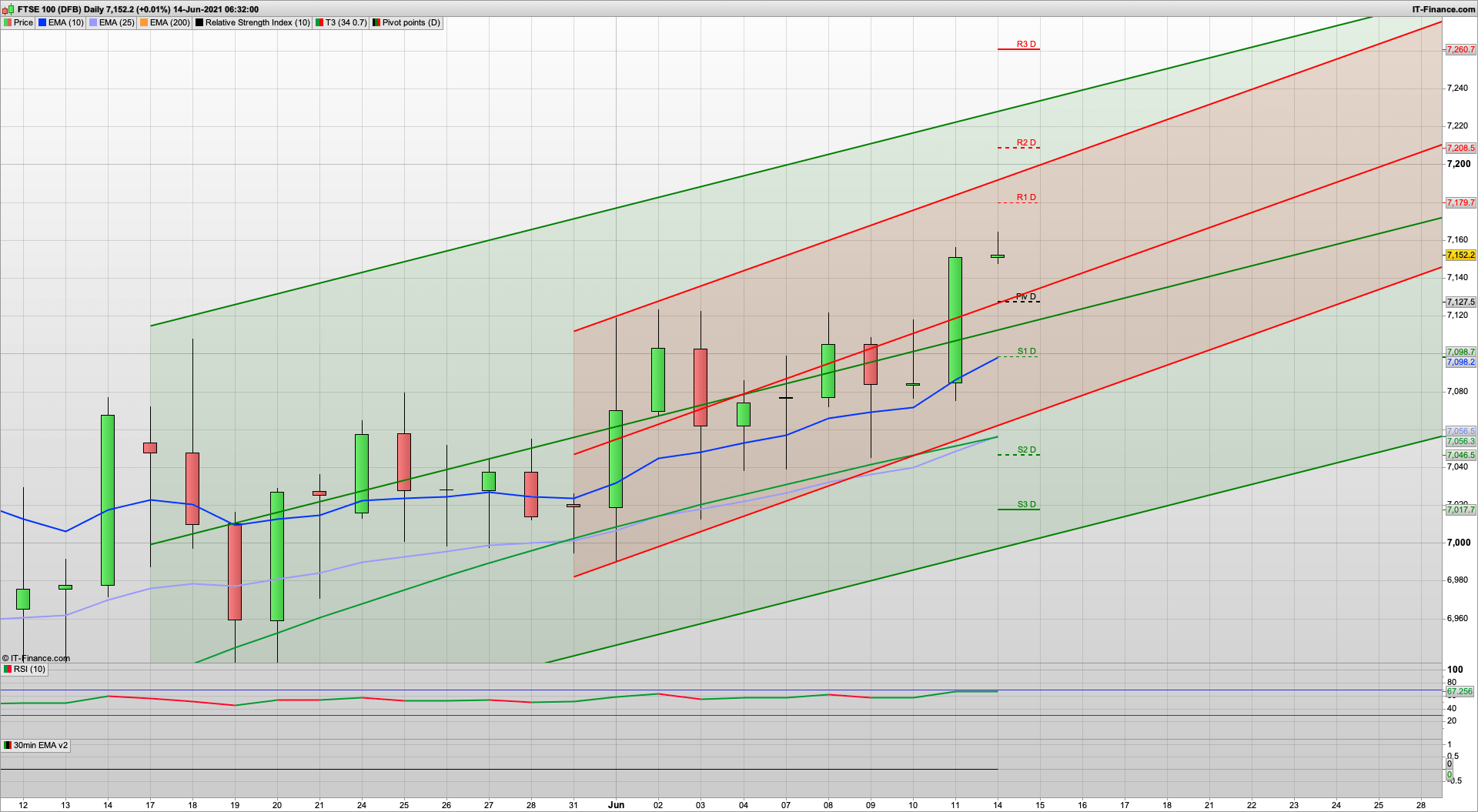 That was a great rise on Friday and I have just closed the last portion of the 7086 long this morning at 7150. I am expecting some more upside today but maybe a bit of a slow start to the week as we have the Fed later on Wednesday so may see a bit of treading water ahead of that. For today we may well have an initial dip down to the daily pivot at 7127 to start with, and then if the bulls defend that we could see a bit more of a Bull Monday kick in and a rise back towards the 7179 level.

7164 has held as resistance overnight being the most recent high on 10th May and we have seen a bit of a stall of the rise here. The bulls need to break above this now to see a test of R1 at 7179 and then the top of the 10 day Raff at 7191 above that. Distinctly possible to get that high today, especially if the S&P500 pushes on a bit and moves above the 4250 level.

For the bears then below the 7127 pivot support 7106 is the 200ema on the 30m chart and just above S1 at 7098. 7116 is also however the Hull moving average support on the 2h chart and 7099 is the green coral. Ergo there are a few supports in this area and the bulls will be looking to defend this.

A dip and rise would fit quite well today, and the S&P looks to be on a path towards the top of the 10 day Raff channel at 4292 currently, which should pull the FTSE100 along with it and possibly as high as the 7223 20d Raff channel top.

Good luck today, still feels like buying the dip is the best play at the moment.

Miners helped to boost the benchmark, with Glencore and Evraz among the top 10 performers after a record yearly leap in domestic economic output for April bolstered traders’ confidence in the recovery.

Biden’s G-7 Reset
The Group of Seven summit wrapped up with the final communique committing 1 billion more doses of vaccines for poor countries, backing the U.S.-led calls for a probe of the pandemic’s origins and pressing China on human rights. But a closer look at the vaccine goal shows the bloc has pledged only 613 million new doses, including some funded partly by previously announced aid. The final document also failed to finalize a timeline to ditch gasoline-powered cars, after an earlier proposal to make zero-emission vehicles the majority of new passenger auto sales by 2030. Overall, Biden notched the summit as a win, with other G-7 leaders visibly relieved to have a return to a more predictable and traditional U.S. administration. France’s Emmanuel Macron welcomed him back to the “club.”

Ten-year Treasury yields inched up to around 1.46% after hitting three-month lows on Thursday and notching their biggest weekly slide since December last week. Stocks saw modest gains in Japan and fluctuated in South Korea. Trading volumes were light with a number of holidays in the region including in Australia, China and Hong Kong. U.S. futures edged up after stocks staged a late rally Friday, closing at another new high after a choppy day of trading.

The dollar was steady against Group-of-10 peers in the wake of a Group-of-Seven leadership meeting that emphasized unity.

With Treasury yields trending downward, investors are anticipating the Fed will reaffirm that its ultra-loose policy remains appropriate, and that it’s too soon to start even contemplating tapering bond purchases. Still, officials could project interest-rate liftoff in 2023 amid faster economic growth and inflation, according to economists surveyed by Bloomberg. [Bloomberg]