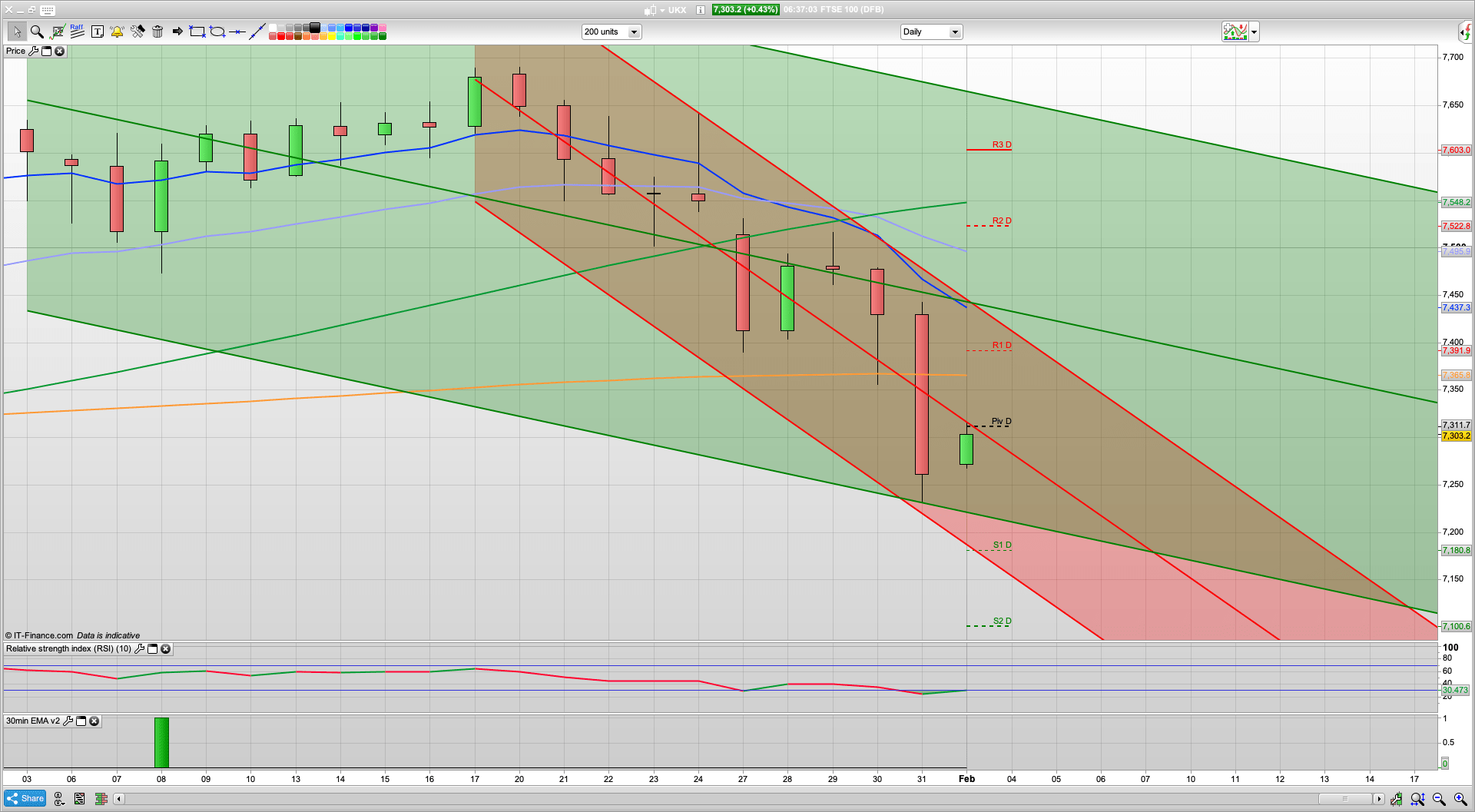 The FTSE 100 ended Friday down 1.3pc as bourses fell across the Continent, following news that two cases of the virus had been confirmed in the UK. London’s mining firms were once again the biggest victims as worries about the global spread of the virus – which emerged from Wuhan, a city at the core of China’s industrial heartlands. The FTSE 100 saw a low of 7240 later in the evening as the S&P continued to head down towards the 3200 level.

Two people in the UK have now been tested positive for coronavirus, which adds weight to the World Health Organisation’s global emergency stance.

Chinese shares tumbled and the yuan weakened as traders returned from an extended holiday amid the worsening coronavirus outbreak today. Support measures from China’s government helped stem losses somewhat in Asia, while U.S. futures rose and Treasuries slipped. The People’s bank of China is providing more than $21 billion of liquidity in a bid to support markets and its economy, which may ease a global sell-off sparked by the spread of the coronavirus. The weekend’s virus developments include the first fatality outside China. The offshore yuan was steady early Monday after weakening last week through 7 per dollar.

China unveiled a raft of measures over the weekend to aid companies hit by the coronavirus outbreak and also shore up financial markets. Apart from the central bank’s supply of cash to money markets, banks were told to lend more and not call in loans to companies in Hubei and other affected regions. In addition, night trading sessions for futures were suspended, some share pledge contracts can be extended, and there was a relaxation of asset-management rules, which were forcing banks to remove implicit guarantees for trillions of dollars of investments. The measures announced over the weekend were mostly targeted at the immediate problems facing the economy and markets, and aren’t a large increase in stimulus, although that could change if the situation warrants.

The FTSE 100 futures have recovered from the 7240 low we saw after hours on Friday, helped by the Chinese measures put in place. The bulls will be keen to build on this first thing, helped by the influx of new month money as well. The first stumbling block is at 7328 though and they will need to break above this. Then a test fo the 7360 level were we have a back test of the 200ema on the daily chart, as we dipped below this on Friday during that drop. If the bulls were to break above 7360 then 7391 and the round number of 7400 level is next up, and a level that we may well see the bears try again from.

The S&P has 2 hour resistance in play now at 3257, so the bulls will need to break that to invalidate the drop potentials for 3200, though a dip down that far still makes sense and a test of the bottom of the Raff channels. That would likely see the FTSE drop down to the 7200 area.

Initial support this morning is at 7247 where we have the fib level and also Fridays low, though we have already risen to the 7300 level and above the 30min coral. Whilst that is still red, if the bulls are quick out the blocks then that could easily go green (up trend) and become decent support at 7291. The ASX200 (Australia) defended its support level today and despite gapping down, didn’t break below 6900. As such the FTSE might well do something similar and defend the 7300 area we are looking at opening at. Bull Monday, Bear Tuesday pattern this week quite possibly.

It still feels like shorting the rallies is the better play for the moment and as mentioned I am looking at the SP bears to defend any rise to that 3257 for a push down toward the bottom of the Raff channel and S1 today at 3195. It will be interesting to see if the FTSE can push past the 7328 initial resistance level first thing though, as if it does we may well see a fairly quick rise to the 7360 level. Certainly going to be an interesting open! Good luck today and stay nimble!