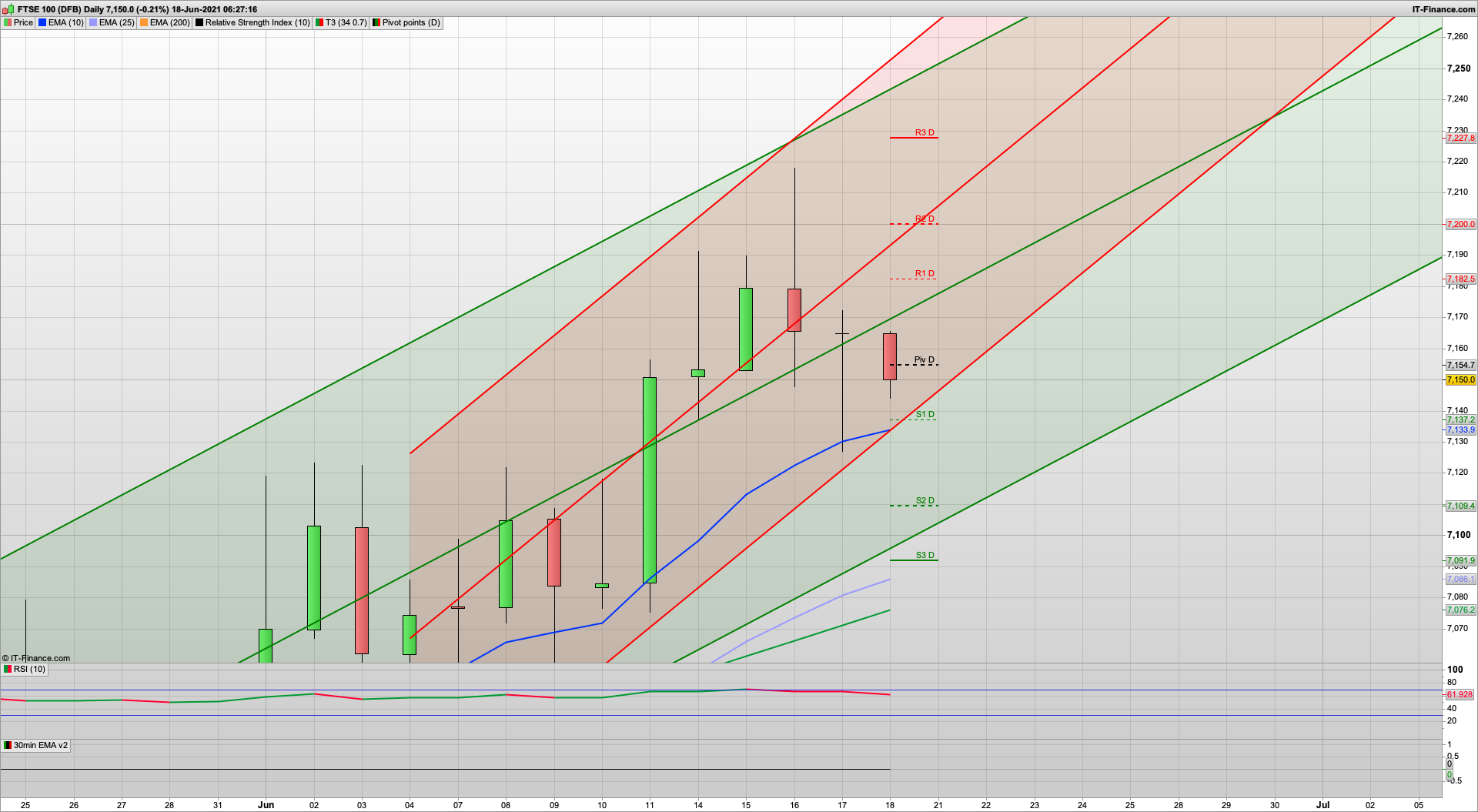 We tested the 7130 support level after the bell yesterday and it held well for a 30 point bounce. That level is still the line in the sand for the moment and the bulls will need to defend that otherwise we are looking at a slide down to the 7095 level and just above S3 at 7092. Below that then 7055 is next up….

Following yesterdays less than bullish affair the 2 hour chart remains bearish with the key resistance levels moving down to the 7179 level to start with today.

Generally today I am thinking we may well see a bit of a bullish session, and the S&P may well continue to pull away from the 4200 level that held well yesterday. The S&P 2 hour chart is just going to bullish as I write this so if the bulls can be quick out the blocks then we may well see a push towards 4239 2h coral resistance and then possibly a push through later. Initial support is from the 30m green coral line at 4217 and a dip down to this area and subsequent bounce would play out well.

We have UK retail sales just out and coming in below forecasts – despite the media talking up everyone splashing the cash these figures show that isn’t the case. Inflationary pressures, along with recession fears for next year, starting to spook people a bit more now and sitting on their hands in terms of spending.

So looking at a range between 7130 and 7180 to start with today, and a break either side is probably worth hopping on – though breaking the 7200 level might be a challenge for the bulls today. If we get a late evening pump on the US markets as per usual we may well see a decent close to the week. Cable has continued to drop, now around the 139 level as the dollar strengthens, and again this will help underpin the FTSE100 bulls.

Have a good session today and enjoy your weekend.

British Airways owner IAG topped the blue-chip risers on Thursday, with its share price boosted by news that the government was considering allowing double-vaccinated travellers to travel to amber-list countries without quarantining.  The company’s shares rose 1.86pc on the day to 200.30p, on the prospect new rules could resurrect tourism between Britain and more than 150 countries and territories including the critical US market.

Elsewhere the market was preoccupied with Wednesday’s signal by the US Federal Reserve that there could be two interest rate hikes by the end of 2023, much sooner than expected.  The prospect of rising global interest rates put share prices under pressure throughout Thursday, as traders were concerned that the era of record low borrowing costs could be nearing an end.

The blue chips spent most of the day down between 0.4pc and 0.6pc and the FTSE 100 finished the session 31.52 points lower at 7,153.43.   The index was harder hit than its counterparts in France or Germany due to miners dragging down the benchmark, as a stronger US dollar hit commodity prices after the Fed’s comments.

Asian stocks drifted Friday after a rally in U.S. technology shares and Treasuries Thursday, as investors unwound some of this year’s dominant reflation trades. The dollar held gains and commodities steadied after overnight losses.

Equities climbed in Hong Kong and Australia, and slipped in Japan after a central bank meeting. In China, shares retreated after U.S. regulators proposed a ban on products from Huawei Technologies Co. and four other Chinese electronics companies. U.S. futures edged higher after a fresh bout of rotation from cyclical stocks pushed the tech-heavy Nasdaq gauge to another record. The benchmark S&P 500 ended the U.S. session flat.

Treasury yields pared a slide spurred by speculation investors were unwinding bets on a steeper curve, after Federal Reserve officials signaled monetary-policy tightening could start sooner than previously thought, helping to rein in the risk that inflation might get out of hand. Australian 10-year yields fell.

The Bloomberg Dollar Spot Index dipped after a fifth day of gains, its longest winning streak since March 2020. Its advance has made commodities that are priced in greenback more expensive, driving declines across the complex. Copper is headed for its worst week since the start of the pandemic and oil slipped Friday.

The yen was little changed after the Bank of Japan maintained its policy rate and said it would extend its Covid support program. [Bloomberg]