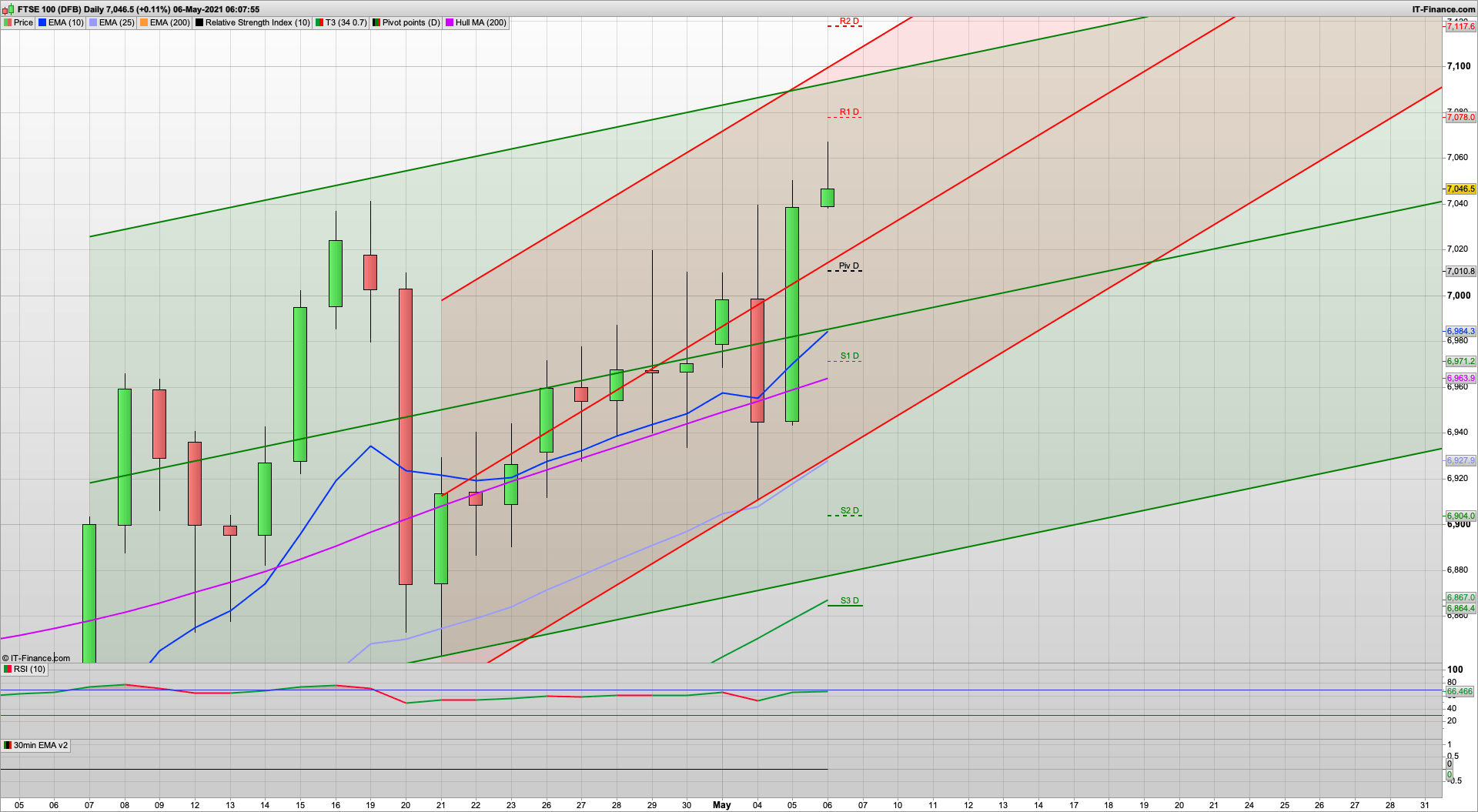 The banking index gained around 3pc, with Barclays, NatWest and HSBC all near the top of the leaderboard.

G-7 diplomats have singled out China in a final statement containing a laundry list of concerns that will get under Beijing’s skin, from alleged human-rights abuses to its actions on Taiwan and incursions in cyber space. “We encourage China, as a major power and economy with advanced technological capability, to participate constructively in the rules-based international system,” the statement said. The tone sets the stage for when leaders meet next month. U.S. President Joe Biden will make his G-7 debut and try to corral allies into taking a firmer stance against China.  It will take some convincing given the country’s economic clout and its place as a key player in multilateral issues like climate change.

Asia stocks are set for a muted open after technology shares weighed on U.S. markets, offsetting optimism over solid corporate earnings and economic reports. Futures were little changed in Australia and Hong Kong. Trading resumes in Japan and China after holidays. Treasuries climbed. The Bloomberg Commodity Spot Index returned to its highest level since 2011, with oil trading above $65 a barrel. The dollar was little changed. [Bloomberg]


US & Asia Overnight from Bloomberg

Asia stocks pared gains and U.S. futures dipped Thursday, while the Australian dollar tumbled after signs of a further souring in trade relations with China.

Chinese and Australian shares dropped, and Hong Kong all but erased earlier gains. Stocks outperformed in Japan as trading resumed after a holiday. China said it was suspending a regular economic dialogue with Australia, in a move intended to signal Beijing’s growing frustration with Canberra. Earlier in the U.S., the tech-heavy Nasdaq 100 ended in the red, while the S&P 500 notched a small gain. The dollar edged higher.

As the world’s largest economy rebounds, investors are increasingly focused on when the central bank might start throttling back its emergency support. Economists surveyed by Bloomberg expect the Fed will announce a reduction in the pace of bond purchases in the fourth quarter. While Chair Jerome Powell hasn’t yet shifted from his message that it’s too soon to discuss such a move, policy makers have begun to address the issue more directly.

Boston Federal Reserve President Eric Rosengren suggested that the U.S. mortgage market no longer needs as much support, advancing the debate on when the central bank might start tapering its monthly bond purchases. Meanwhile, the U.S. Treasury’s auction schedule suggested the government’s financing needs may have peaked.

The FTSE 100 bulls certainly fought back valiantly yesterday following Tuesday’s sell off, and managed to push past and hold above 7000. Overnight we have tested the key fib level at 7062 and seen a modest reaction and as such that will be the line on the sand initially this morning. Of more interest above this is the 7078 R1 level, and then the 2 Raff channel tops, with the 20 day not that far away now at 7092, and looking like a good level to try a short at. Above this the 10 day channel is at 7100. As such we may well see a stutter in this area, though a push through will likely get 7125 where we have the next level of note. Will the bulls be able to break the Raff channels today, especially as both are in the same area?

The ASX200 had a pretty bearish Thursday and steadily dropped for most of the session. If we do the same then the main support level of note is around the 7000 level, where we have the Hull moving average on the 2h (7002) and the green coral (6989). This is just below the daily pivot at 7010. 6994 is also the 200ema on the 30m chart, so it would be good to see this area hold, as once again the bulls will want to try and defend the 7000 level.

Initial support is at the 30m coral at 7034 so we could see a spring up from this initially, to retest the overnight high and the 7078 R1 level.

The S&P has 2h resistance at the 4183 level so we will need to see a move above that today, if it’s going to continue rising towards the 4200 area. The 2h chart is actually bearish to start with on that and 4172 is the lower Hull resistance, along with the 30m coral here. Bulls will need to be quick out the blocks today.

We also have NFP tomorrow, and the latest ADP jobs report showed a surge in private sector hiring in April, although less than analysts had expected. NFP may well be similar.

Still cautiously optimistic for some more upside but watching that 7080 to 7100 area closely for today. 6990 to 7000 for support as well. Good luck today.