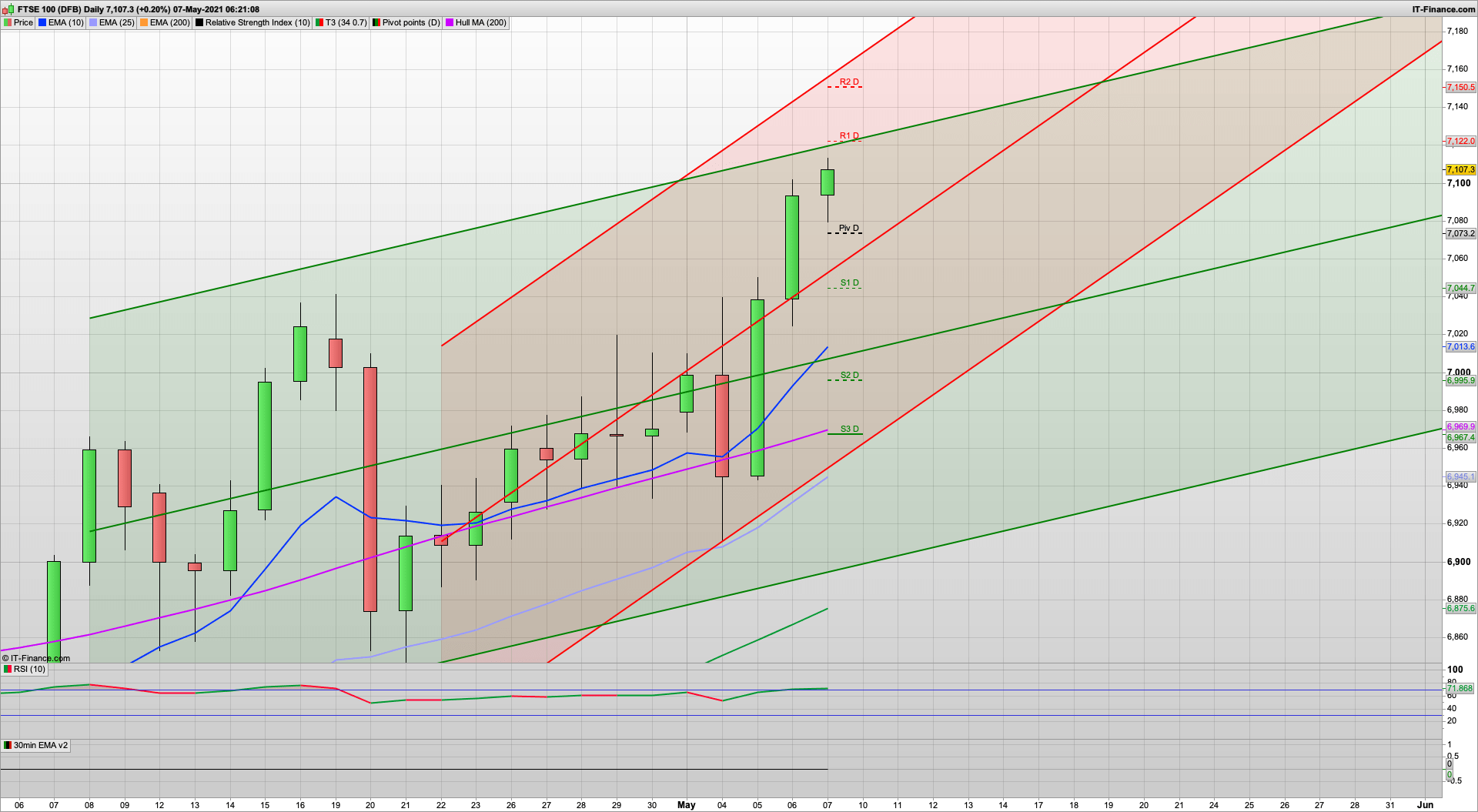 The FTSE 100 rose to a 14-month high, adding 36.87 to close at 7,076.17 as the UK services sector reported its fastest growth since 2013 last month, and the Bank of England’s rate setters voted unanimously to leave interest rates unchanged. The Bank also kept its quantitative easing programme on hold at £895bn, and raised the forecast for economic growth.

The FTSE 100 was also helped by a falling pound which finally gave up earlier gains after fluctuating as it struggled to digest the Bank of England’s announcements. Sterling bought $1.3879 by the end of the day, a 0.2pc drop and €1.1518, a 0.6pc drop.

Stocks were boosted by strong corporate earnings. FTSE 100 retailer Next gained 148p to £82.74 after it raised its profit outlook for the 2021-22 year for the second time in two months, while engineer Melroseclimbed 1.25p to 164.95p after it said it was performing “modestly” ahead of expectations, with operating margins in the first quarter improving faster than expected.

The Biden administration is likely to maintain pressure on China by preserving limits on U.S. investments in certain Chinese companiesimposed under former President Donald Trump, bucking entreaties from Wall Street to ease restrictions. Trump’s blacklist of companies linked to China’s military, announced in November, includes three of the country’s biggest telecommunications firms. President Joe Biden is trying to navigate a fraught relationship with Beijing, as tensions flare over issues ranging from trade to human rights to military postures in the South China Sea. Meanwhile China has urged Western nations to stay out of its affairsafter G-7 foreign ministers unified behind a litany of grievances with the world’s second-largest economy.

Asian stocks looked set for a muted start amid a warning from the Federal Reserve on stretched valuations and gains in U.S. shares on positive economic data. The dollar retreated. Futures pointed to modest gains in Japan and Australia, though Hong Kong contracts slipped. S&P 500 futures were little changed after rallies in U.S. benchmarks overnight, which included a fresh record for the Dow Jones Industrial Average. China’s shares traded in New York briefly extended losses after Bloomberg News reported the Biden administration is likely to preserve limits on U.S. investments in certain companies from the Asian nation. Treasuries held steady, with the 10-year yield hovering well below recent highs at 1.57%.[Bloomberg]


US & Asia Overnight from Bloomberg

Taiwan and South Korea led modest gains across the region that lifted MSCI Inc.’s gauge. U.S. contracts climbed after renewed gains in U.S. benchmarks overnight, which included a fresh record for the Dow Jones Industrial Average. Copper soared to an all-time high on expectations that rebounding economies will spur a boom in global demand.

China’s latest trade data showed exports rose well ahead of expectations and imports saw the fastest growth since 2011. Traders shrugged off news overnight that the Biden administration is likely to preserve limits on U.S. investments in certain Chinese companies.

Investors are focusing on strengthening growth in the world’s largest economies, shaking off concerns for now that a faster-than-expected rebound could spur excessive inflation. The Federal Reserve remains committed to near-zero interest rates to bring about a full recovery, though an announcement of a pullback in its heavy monthly bond purchases seems increasingly likely in the second half of this year.

We have the USA NFP today and the forecast is 978k. Unemployment rate is forecast to drop slightly to 5.8% as well. As such, combined with Friday, we may well see some chop today. The S&P has managed to get above the 4200 level and is nearing the top of the 20 day Raff at 4250, so we may well see a bit of a stutter here of any upside, ahead of the weekend as well, should it get there. Support is at 4185 with the daily pivot, coral and 200ema all here.

For the FTSE we may well see the bulls push a little bit higher first thing towards the R1 and key fib level at 7125, before a bit of a dip back. As per the S&P the main support is at the daily pivot at 7073 and this may well tally with the rising Hull moving average on the 2h charts, currently at 7048 but rising steadily – if we have a slow drop down towards 7075 then they may well converge at this level.

Just a word of caution though to stay nimble on NFP Friday – it can be a bit of an odd one. Not too much more to say really, keep an eye on the levels and have a good session today. Good luck and enjoy the weekend.