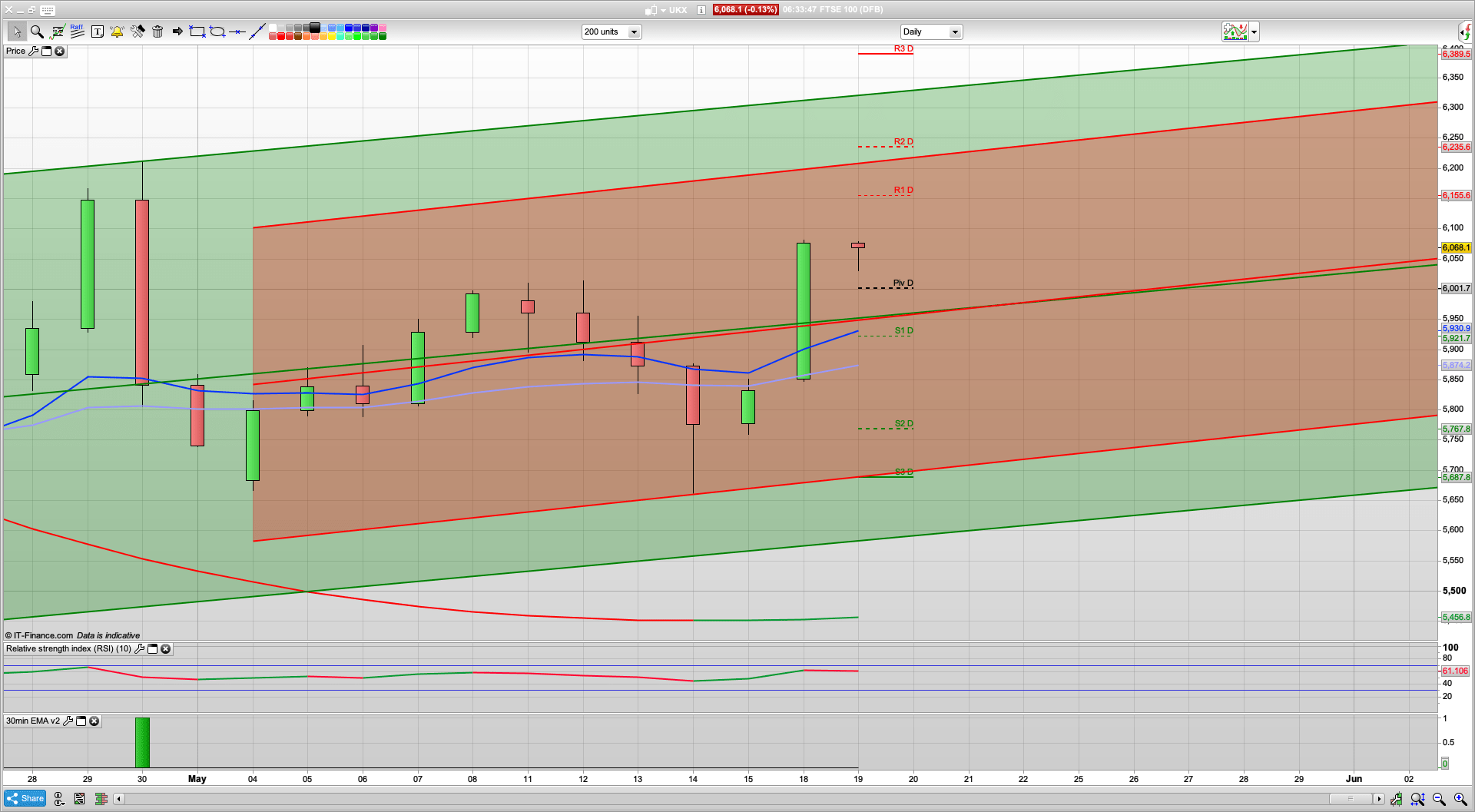 Well that was quite the rally yesterday with the Dow adding over 1000 points at one stage, before dropping back.

The FTSE 100 climbed 4.3pc to 6,048.59, its highest level since the end of April. The index was boosted by travel stocks such as easyJet and cruise operator Carnival, which would benefit from a swift return to normal economic activity.  In the US, the S&P 500 was up 3.1pc in early afternoon trading. The rally was also driven by comments Federal Reserve chairman Jerome Powell made on Sunday. He said the central bank could intervene further in markets if needed: “[We are] not out of ammunition by a long shot,” he told CBS’s 60 minutes.

Oil prices also jumped as producers in the US and elsewhere continued to cut activity. WTI crude, the US benchmark, jumped above $30 a barrel for the first time in two months, while Brent crude rose 7.5pc to $35.34. The rise in prices shows some stability in the market. It was only four weeks ago since US prices plunged below zero for the first time ever.

European regulators also announced that temporary short-selling bans in Austria, Belgium, France, Greece, Italy and Spain would be lifted from midnight on Monday.  The move raised the prospect of investors placing fresh bets on falling share prices at companies they believe have been overvalued while the pandemic gripped the continent.

Chinese President Xi Jinping pledged to make any coronavirus vaccine universally available once it’s developed, part of an effort to defuse criticism of his government’s response to a pandemic that has killed more than 315,000 people around the world. In a speech on Monday to the World Health Assembly, the governing body of the Geneva-based World Health Organization, Xi called for greater international cooperation in fighting the pandemic. China has come under fire from the U.S., European Union and Australia over its initial handling of the outbreak. Xi’s new response comes into contrast with the Trump administration’s move to suspend funding for the global health body. His pledge to make any vaccine universally available also comes amid growing concern that countries will put national interests first in the quest for a protective shot, seen as the key to getting economies moving again. Meanwhile, an experimental vaccine from U.S. biotechnology company Moderna Inc. showed signs that it can create an immune-system response to fend off the new coronavirus, offering tentative hopes in the global effort to combat the pandemic. The results are just a sample and should be viewed with caution, but they showed no major safety worries.[Bloomberg]

Well that was a lot more bullish yesterday than expected and was one of those trending days where it just grinds in one direction with no pull backs to speak off. However, its a good sign for the markets and the bulls that we pushed above the 6000 level as it keeps alive the chance of a test of 6130 which is the next daily resistance level of note. We also have the recent high at the 6200 level to watch for, as well at the 10 day Raff channel at 6208. Should we see this higher level today (not sure they will add another 150 points today but you never know) then a short here is worth a go. That may well in fact tally with the 3028 S&P resistance level as well which is the top of the 10 day Raff channel on that, and also R2 for today. Bit more upside to squeeze the bears, suck in retail, and then drop back towards the end of the month maybe?

Initially I am thinking that we get a bt of a drop back down to test yesterdays closing price at 6048, but maybe more and a test of the daily pivot at 6002. If that holds then it may well act as a spring board as the bulls will certainly be keen to pull the FTSE 100 higher. Probably also wants to stop out a lot of bears that went for the “sell in May” already!

Below the pivot then the next key support is at S1 and the 200ema at 5920 area, but moving back below 6000 will certainly unsettle the bulls. They may well however try and defend the fib level support at 5965 so I have put a tentative long in the plan for this level as well. The charts all remain positive really as they were yesterday morning, so buying the dips (if we actually get one today!) is still the preferred plan for the moment. I think there is more upside to come still, in the short term, though there is the top of the 20 day Raff rising steadily, and sitting at 6330 currently.