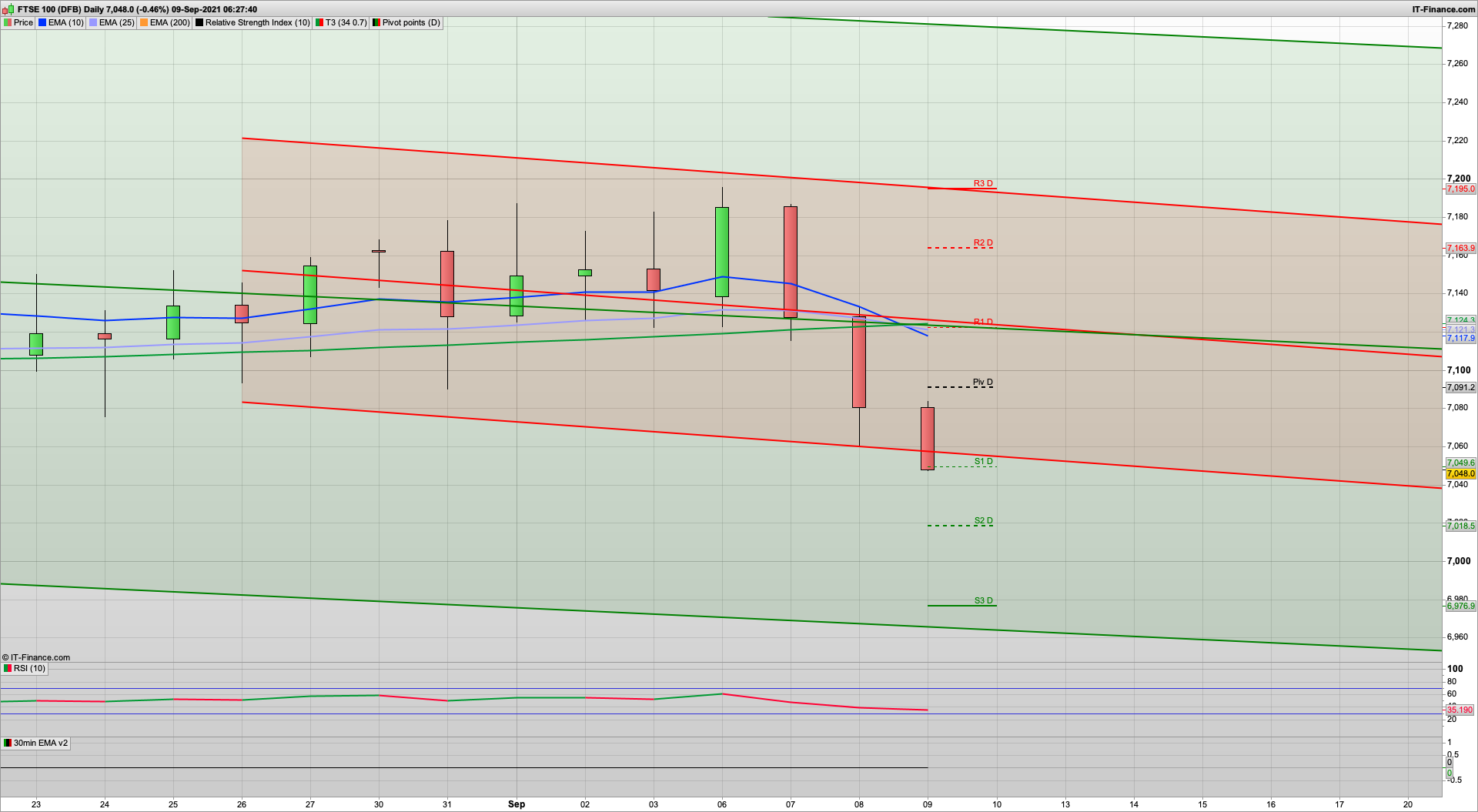 The FTSE 100 closed down 0.75 per cent at 7,095 points as the seasonally weaker September period kicks in. A dip this month does bode well for a stronger year end though.

Andrew Bailey has begged 2m sidelined workers to return to the jobs market as he warned that severe staff shortages are holding back Britain’s economic revival.

Britain needs millions of people to come back to the workforce to fill huge vacancies created since society reopened, the Bank of England Governor said.

Overnight we have dropped further off that red coral resistance line to test the first support here at 7039 where we have the key fib level. We could see an initial bounce off this level though the bears are still in control as we are now in the seasonally weaker, and more volatile, September period. A drop this month though and into early October sets us up for a decent bounce towards the end of the year.

The ASX200 had a shocker today sliding steadily all day, and with the negative backdrop on the news front we could well see some further declines play out on the FTSE100 during today. However, we have dipped below the 10 day Raff overnight so a snap back up initially to retest yesterdays closing level and test the daily pivot would make sense.

If we do get an initial kick up to the pivot and the bulls were to keep the momentum, then the 7125 – 7135 area is the next key resistance as we have the 200ema 30m here, along with it being the level we dropped off after the bounce yesterday. 7121 is the HullMA on the 2h chart as well.  The 7135 is also the key fib resistance for today. 7149 is then the 2h coral (now red showing a downtrend) and should cap any climb in the short term.

For the bears, if they were to break below the 7040 level then the obvious target is the round number 7000 but we have S2 just above this at 7018. Ultimately I wouldn’t be surprised if we see the 6960 area sometime soon though. Bit of reality kicking in at the moment thats for sure as the news flow and general sentiment  turns pessimistic.

So, looking at an initial kick up today then a further slide later on. Good luck today.

Stocks declined along with U.S. and European equity futures Thursday as investors continued to fret over a slowdown in the economic recovery from the pandemic. The dollar and Treasuries held an advance.

Japanese shares snapped a winning streak, sapped by a plan to extend a virus emergency for Tokyo and other areas. China’s technology stocks slid after officials told firms including Tencent Holdings Ltd. and Netease Inc. to end their focus on profit in gaming, again highlighting Beijing’s regulatory crackdown.

Shares in indebted developer China Evergrande Group plunged to the lowest since 2015. The company is one of the biggest financial concerns in China.

The S&P 500 retreated for a third day overnight and the Nasdaq 100 posted the biggest drop in two weeks. A Federal Reserve survey signaled a moderation in economic growth due to the delta virus strain. Treasury yields stay lower.

A rally that took global stocks to records has cooled as investors await more signs that economic reopening can overcome challenges posed by the delta variant. Another concern is the prospect of a gradual reduction in monetary-policy support, with the focus on the European Central Bank meeting later Thursday. Meanwhile, a surge in Chinese factory-gate inflation highlighted price pressures in the global economy. [Bloomberg]