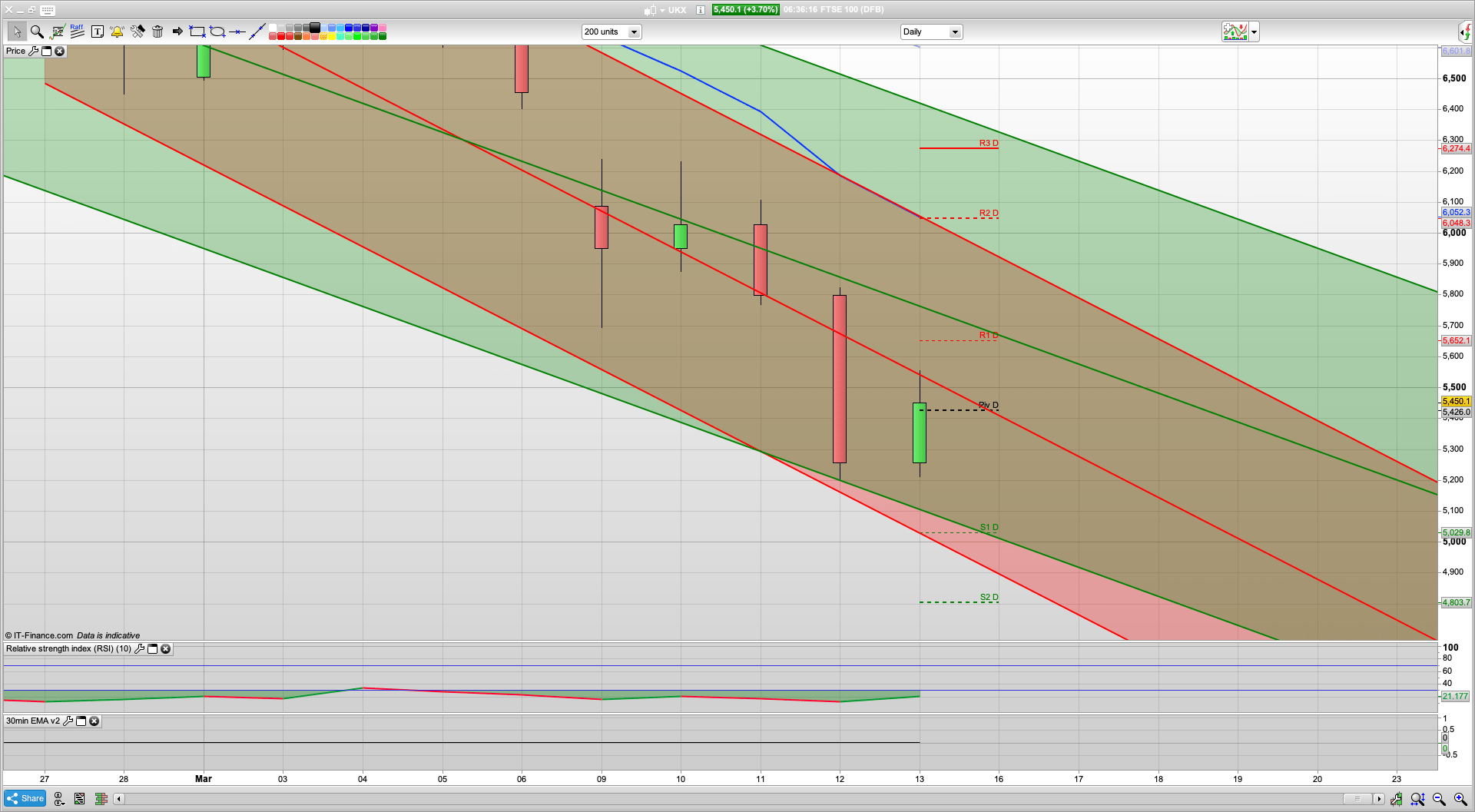 The FTSE 100 plummeted yesterday, touching its lowest level since 2012, after Donald Trump announced that all travel from Europe to America – excluding from the UK – will be suspended for 30 days.  In one of the most dramatic addresses to the American people in recent history, the president said that starting at midnight on Friday (4am Saturday GMT), for 30 days no foreign nationals can visit the US from Europe. Mr Trump was later forced to clarify that the restrictions would not apply to traded goods.

On the worst day for the FTSE 100 in nearly 33 years, it wasn’t a question of gains and losses – it was simply about how big the losses were. Nearly £190bn was wiped off companies on the FTSE 350, with only two companies making gains across London’s top two indices.

The London stock market suffered its biggest crash since 1987 amid a global collapse in prices as world leaders tried in vain to stem panic over the spread of coronavirus. The blue chip FTSE 100 index plummeted by 10.9pc, wiping £160bn off the value of Britain’s biggest firms – its second-largest fall ever, beaten only by a plunge in the week of Black Monday. It was part of a brutal sell-off across the globe in which European shares suffered their biggest ever drop and markets nosedived from Buenos Aires to Bangkok.

The Dow Jones and S&P 500 joined the global rout, closing 10pc and 9.5pc lower respectively – the sharpest daily percentage drops since 1987. Attempts by the US Federal Reserve and European Central Bank to turn the tide seemed only to highlight their powerlessness.
Global stocks plunged into a so-called “bear market”, where prices have fallen 20pc from their recent highs, on fears the outbreak will trigger a worldwide recession by bringing normal life everywhere grinding to a halt.

Donald Trump, the US president, sparked the chaos when he declared a 30-day ban on flights from Europe, excluding the UK and Ireland. in what was dubbed the “most expensive speech in history”. The president’s announcement prompted immediate confusion and he was forced to clarify that the restrictions would apply only to people, not goods.

The Fed waded into the turmoil once again, announcing plans to inject $1.5 trillion (£1.2 trillion) into short-term markets used for lending between banks to preserve financial stability. It also pledged to buy $60bn of Treasury bonds over the coming month, after investors reported problems finding buyers for government debts.

Federal Reserve
The Federal Reserve is offering more than $5 trillion of liquidity to quench markets. It ramped up the amount of cash it’s prepared to inject into funding markets over the next month, a cumulative total above $5 trillion, in a signal that officials will do whatever it takes to keep short-term financing rates from spiking. In the third upsizing of its repo schedule this week, the Fed’s New York branch on Thursday offered $500 billion in a three-month repo operation amid signs that the financial impact of the coronavirus outbreak was starting to strain borrowing markets as well as trading in U.S. Treasuries. The bank will repeat that exercise Friday along with a $500 billion one-month operation, and it plans to offer that amount on 10 occasions in total in the next month. Add it all up and throw in the shorter repo maturities the Fed has scheduled, and the sum will reach $5.4 trillion. The promise of increased injections came as stocks plunged anew Thursday and on signs of a dash for cash by companies, which is putting extra strain on global funding markets.

What a week this has been. The actions by the Fed last night have stopped the rout for the time being, and indeed the markets have stabilised a bit but for how long. It looks like we might get a bit of a bounce today, to test the 5550 level again that we have seen overnight, and possibly a rise towards the 200ema on the 30min chart at 5800. That will be quite a rally, but doesn’t retrace yesterdays falls. The biggest one day fall since 1987 yesterday! History in the making there.

The Government have moved to the Delay stage of their plan, but stopped short of a full on shut down. They are probably hoping they can muddle through til the Easter holidays without needing to close the schools. We shall see how that goes in terms of number of cases over the next week. Most people seem to be being quite sensible and self limiting possible exposure. Lots of companies doing more work from home and trailing today as well. I imagine there are ongoing frantic scientists working on vaccines and cures at the moment too!

For today, its Friday 13th, and the usual caveat for Friday trading applies – lower stakes! We have initial resistance at the daily pivot at 5426, and we may well see an initial drop down to the 5320 level where we have 30min chart support. Below this we also have the coral at 5274. If the bulls can defend these support areas then we should see a bit of a retrace of yesterdays falls. Below that I am looking at the 5200 level again, then 5100 where we have the 20 day Raff channel. There is also 4970 showing up as support now on the near term charts, maybe for Monday if it continues to slide.

Above the 5550 resistance level I am looking at a possible rise as high as 5800 where we have the 200ema on the 30min. Prior to that though we have the 2 hour coral at 5740 area which we haven’t tested as yet since it turned red, so a rise may stutter here. Worth a go short off this but as with all trades at the moment be prepared to cut quickly if it doesn’t look like it will work out.

Hope this week hasn’t been too mauling for you, good luck today and enjoy the weekend.