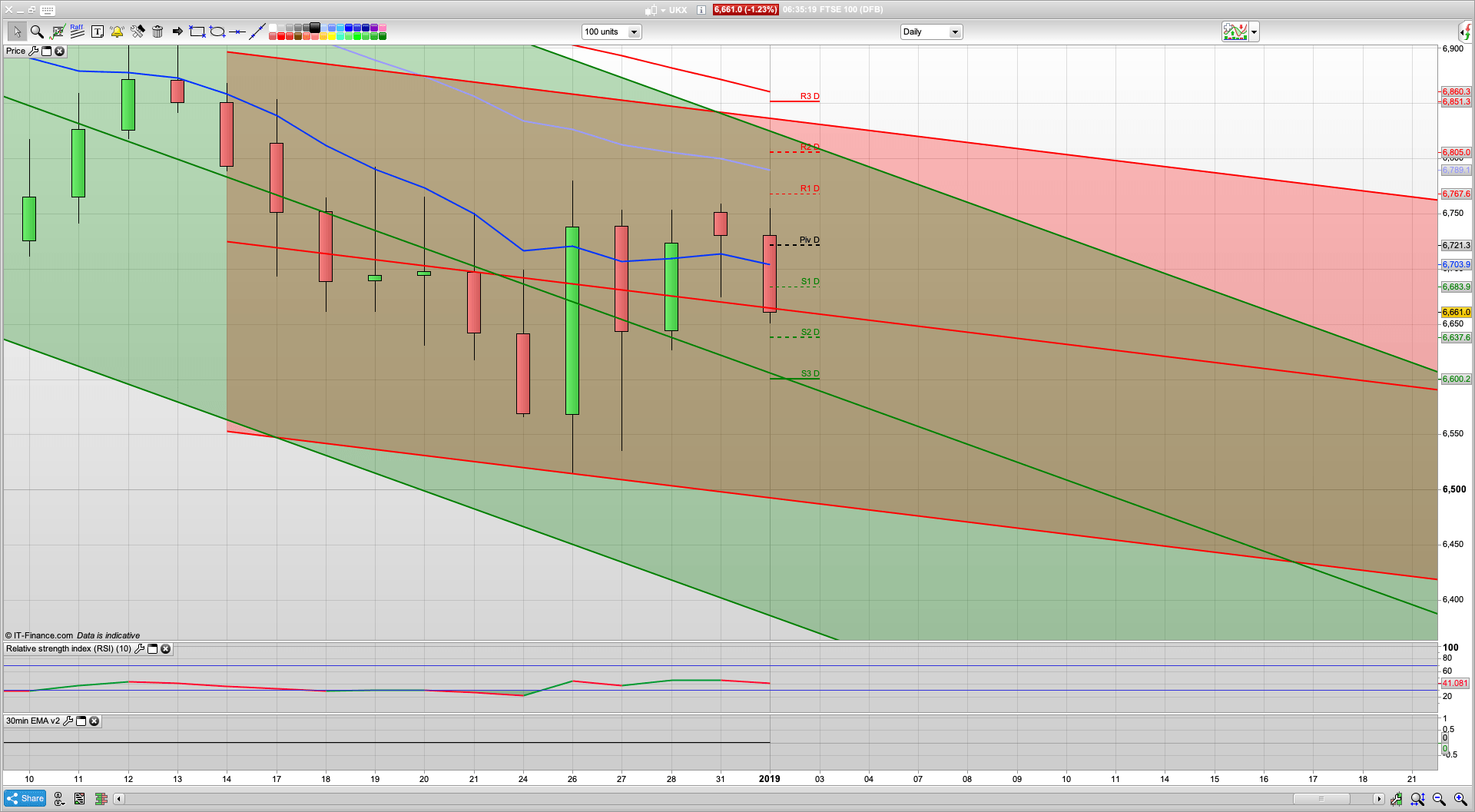 A Happy New Year to you and I hope that you enjoyed the break. 2019 certainly looks like it will be an interesting year for the markets with a bear market looming and a weaker economic backdrop. With that we can expect more volatility, and shorting of the rallies will probably feature heavily this year!

Stocks in Asia fell with U.S. futures and oil erased gains as evidence of slowing Chinese growth weighed on investors starting 2019 concerned about the world economy and reeling from the worst year for global equities since the financial crisis. The yen touched a six-month high.

Declines spread from Hong Kong to Sydney after a closely watched Chinese manufacturing gauge showed factory conditions slumping in December amid the prolonged U.S.-China trade war. Equity markets in the U.S. and Europe also look set to start the first trading day of the year in the red.

In the first sign of a possible opening for negotiations to break the government shutdown stalemate, U.S. President Donald Trump invited the top congressional leaders from both parties to a White House briefing on border security Wednesday and suggested in a tweet he wants to “make a deal.” Parts of the government have now been shut for 11 days.  The offer was extended to the eight top leaders from both parties in the new House and Senate, congressional aides said, and will include a briefing by Homeland Security officials. Democratic leaders haven’t publicly said whether they’ll accept the invitation, which represents a shift from recent remarks that indicated he was digging in on his demand for $5 billion to start constructing a wall or barrier on the U.S. Mexico border.

Later this week, investors may focus on Friday’s U.S. December jobs report and the annual meeting of the American Economic Association, where U.S. Federal Reserve chairman Jerome Powell will be interviewed with predecessors Janet Yellen and Ben Bernanke.

Normally the start of the New Year would just be a fairly straight forward long and we would get a steady rise to start things off. However, Asia had a fairly muted start to trading in 2019, and the backdrop remains weak. The Chinese manufacturing gauge had its lowest reading since May 2017, signalling a contraction as it fell below a reading of 50.

That said, I am looking at support at the 6660 area to start with and we may well see a rise towards the resistance area at 6700 to 6730. The 2 hour chart is currently bearish and showing resistance at 6709 so a small short here is probably worth a go. It may also be worth just doing reduced stakes today to see how the day pans out and let the dust settle a bit. The 30min chart is also bearish to start with resistance at 6695 from both the 25ema and the 200ema. It will be interesting to see if the bulls have any strength and can push things up to start with. Its actually held up pretty well over the festive break, with 6779 printed at one point.

If we do drop down today then I am looking at pretty decent support at the S3 level of 6600 and daily support level at 6590. A such a bounce around here would be expected, and may well gain some traction for a rise back towards 6700.