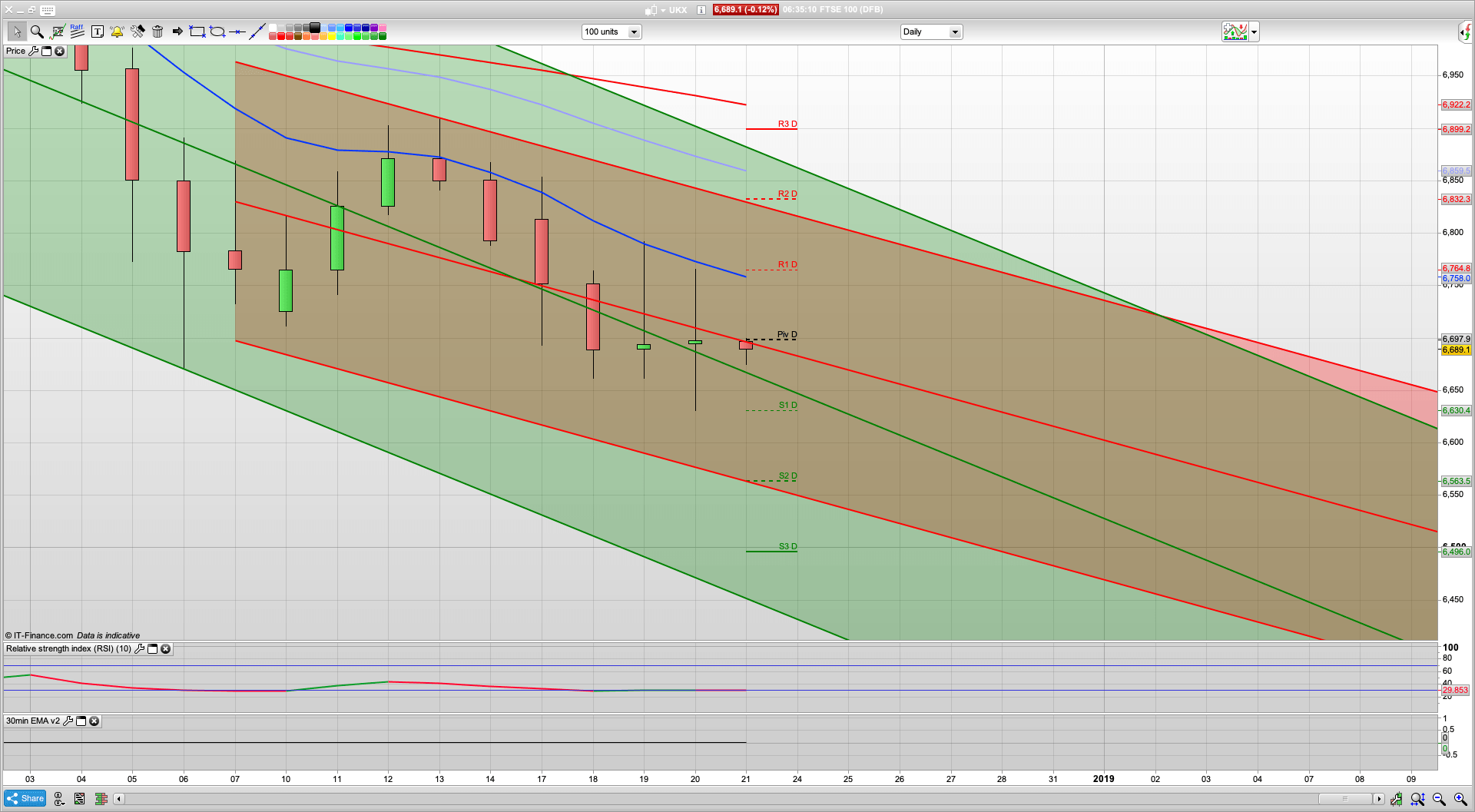 Well we got the rise and then drop yesterday, however the FTSE 100 managed a bit higher than the 6715 resistance, reaching a high of 6765 before dropping back as the US fell, to go back below 6700. The S&P failed to reach the 2520 resistance level, but dropped off from 2512 instead. Overnight has seen a small recovery in the futures prices.

Fears that US central bankers will push markets to breaking point in 2019 triggered another rout in global stocks as the sell-off on Wall Street became the worst in December since the Great Depression. Global stocks slumped to a 20-month low after another interest rate rise at the US Federal Reserve in the face of market turmoil ignited worries that it has made the policy error that will end a record bull run.

The Fed pressed ahead with its dual tightening policy, lifting borrowing costs for a fourth time of 2018, guiding markets towards two more hikes in 2019 and vowing to leave its plan to reverse quantitative easing on “autopilot”.

Hopes that a “Santa rally” could curb large losses on stock markets at the end of a volatile year were crushed by the Fed ignoring recent market turmoil and pressure from Donald Trump to press ahead with its plans to normalise monetary policy. Stocks on Wall Street whipsawed in a second day of volatile trading while European markets ended the day at their lowest level in two years. The Dow Jones – New York’s blue-chip index – slumped a further 1.9pc in intraday trading yesterday, hitting a 14-month low while the FTSE 100 deteriorated late on to slide 54.01 points, or 0.8pc, to 6,711.93, just 10 points away from sinking to fresh two-year lows.

The Treasury yield curve – the market’s most closely-watched recession indicator – edged to within just 10 basis points of inversion territory – when short-dated bonds have a higher yield than those with a longer maturity. An inversion implies that investors expect the Fed to be forced to cut rates in the coming years in reaction to an economic downturn or a policy mistake.

The Fed struck a more cautious tone in its policy statement but Mr Powell unnerved markets by hiking in the face of slowing growth and insisting that its quantitative tightening policy, the reversal of its bond-buying stimulus, would remain on ‘autopilot’.

Reiterating that the Fed will lean on economic data rather than movements on markets, Mr Powell said: “This is the best year since the financial crisis, you’ve got growth well above trend, unemployment dropping, inflation moving up to 2pc. We’ve also got a positive forecast.

It all looks like a bloodbath out there on the markets still, and shades of 1987 and 2008 are in the air. Lots of doom and gloom just before the Christmas break, with the chance of a rally looking less and less likely. However, the FTSE chart has good support at 6630 and if we see this level then I am thinking that we will see a bounce here. Overnight the futures dropped down and bounced at 6641, and as I write this we are back at 6690. As such, if we drop down to test this level in hours then I think that we will see bounce here. If the markets aren’t totally doomed, there are actually some value buys here. On the US markets, it can be seen in the percentage of stocks making new 52-week lows. Currently 38 percent of equities on the Nasdaq and New York Stock Exchange are trading below that level. Since 1984, there were only eight days when a bigger proportion of shares did so.  Two of them were in 1987 — during the famous Black Monday crash, when the Dow Jones Industrial Average lost 23 percent in one day, and then again during the following session. The rest were in the aftermath of the collapse of Lehman Brothers in October and November 2008.

So for today, I am looking at initial resistance at the pivot at 6697, and think that we may well see a dip and rise sort of day. Following a similar pattern to the Australian market today. Above this then the 200ema at 6731 looms likely to be tested again, and was the resistance line that we dropped off yesterday at 6750.

It maybe misplaced but I am favouring buying the dip today, especially at the 6630 level. If that breaks then the next support is at the 6589 level. I am thinking that we might well see a brief respite from the selfing today, mainly for the Fed to save a bit of face ahead of the holidays. I havent put a short win the trade plan today, but a rise towards 6756 is distinctly possible, where we have fib level resistance.