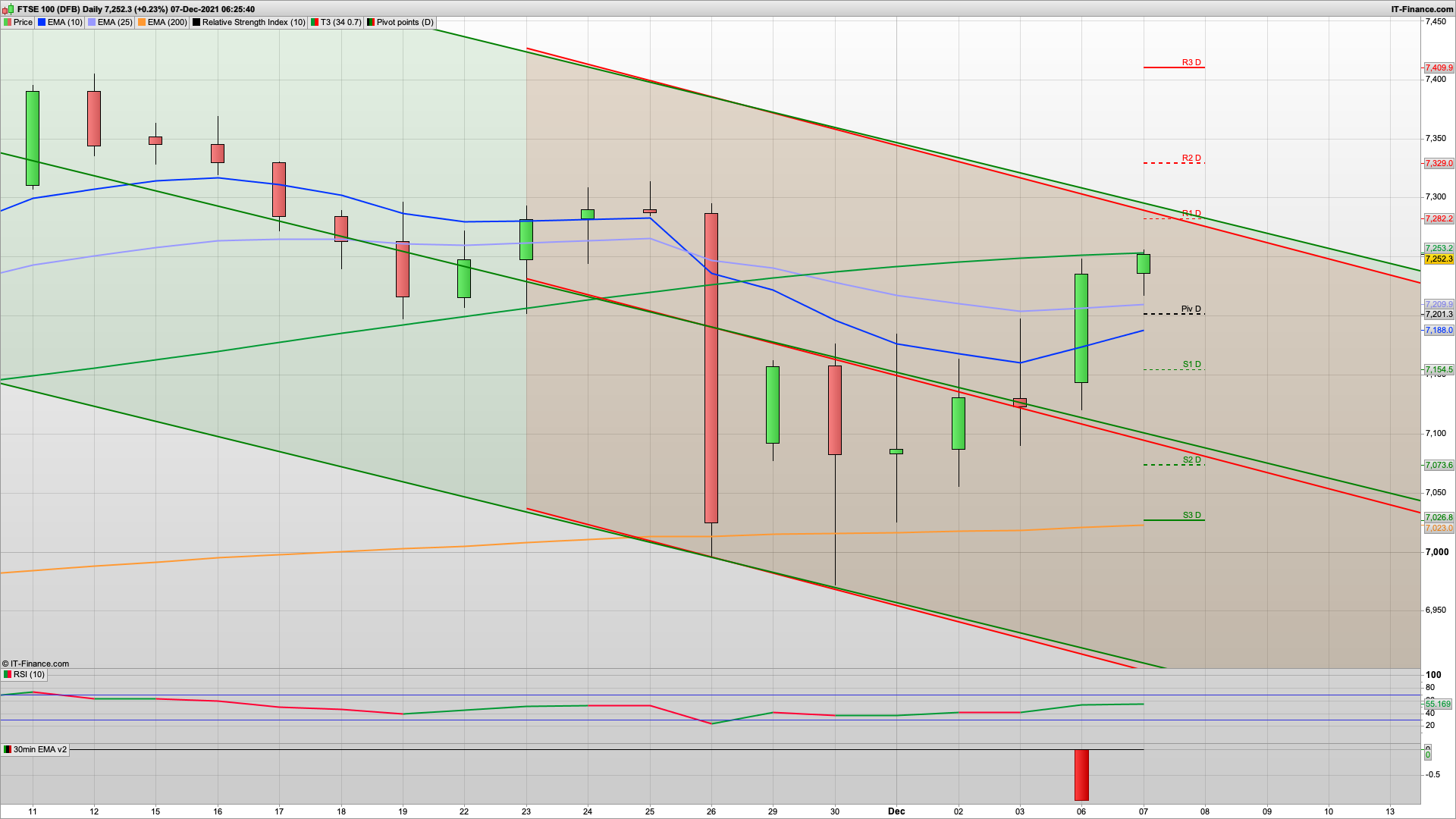 The FTSE 100 had its best session in over four months yesterday as defensive sectors and energy shares led gains, while Deliveroo fell on concerns about a European Union ruling on gig workers. London’s leading index closed 1.7pc higher at 7,232.

Defensive sectors such as consumer staples and healthcare tend to be less sensitive to the economic climate than some other groups. British American Tobacco, Reckitt Benckiser and Unilever gained nearly 2pc and were among the biggest boosts.

MSCI Inc.’s gauge of Asia Pacific shares gained for the first day in three as Japan climbed. Hong Kong advanced with Alibaba Group Holding Ltd. leading a rebound in Chinese tech firms after the company announced a management shakeup. The S&P 500 wiped out last week’s losses, while the technology-heavy Nasdaq 100 also gained as concerns about the severity of the omicron virus variant receded. European futures advanced.

China’s policy makers moved to expand support for the economy Monday as a property-market downturn threatens to hamper growth. They signaled an easing of real estate curbs and pledged to stabilize the economy in 2022. The People’s Bank of China said it will reduce most banks’ reserve requirement ratio, while Premier Li Keqiang said there’s room for a variety of monetary policy tools.

The FTSE100 is hanging in there and we have shaken off the Covid Omicron fears as we push towards the 7300 once again. Did always seem like a massive overreaction to something that to all intents and purposes was mild if caught and also slightly inevitable that we will see various variants. Still, changed the news flow from political sleeze and scandal as well as that court case in the US!

The S&P500 has also pushed past the 4610 resistance level in a sign that we may get towards the 4640 area on that, and in turn help the FTSE rise today as well. Will we see a rise and dip as the bears kick in later?

The next key level for the FTSE100 is at the 7300 area as we have the top of both the Raff channels there, though initially this morning 7260 is the key fib. We are just sat on that as I write this so we may see a dip from here initially. It’s not the clearest of pictures first thing but it does seem to have more of a bullish bias at the moment overall. Probably the S&P breaking 4610 helping with that.

Above the 7260 level then 7300 as mentioned with R2 at 7329 above that (and some daily resistance at 7335), if R1 at 7282 doesn’t get much of a reaction. The dip on Friday to test the green 2h coral at 7100 certainly tee’d up the bulls well and we may well be in the midst of the Santa rally. That said, there is also an argument for a dip down first before that kicks in. So as mentioned, is a bit of a muddy picture! If the bulls were to push on today though then 7335 isn’t out of the realms of possibility and then 7375 above that. Talk will then start again about the 7500 year end!

For the bears, they will be looking to drive this down towards the 7201 level where we have the daily pivot, and the Hull MA on the 2h, though not the first test of that (that was 7050 last Wednesday). Below 7200 then the 7169 200ema 30m and the key fib at 7155 (along with S1 here) would be the next area to watch. That said the momentum is with the bulls to start with at the moment and buying the dip still remains the preferred play.