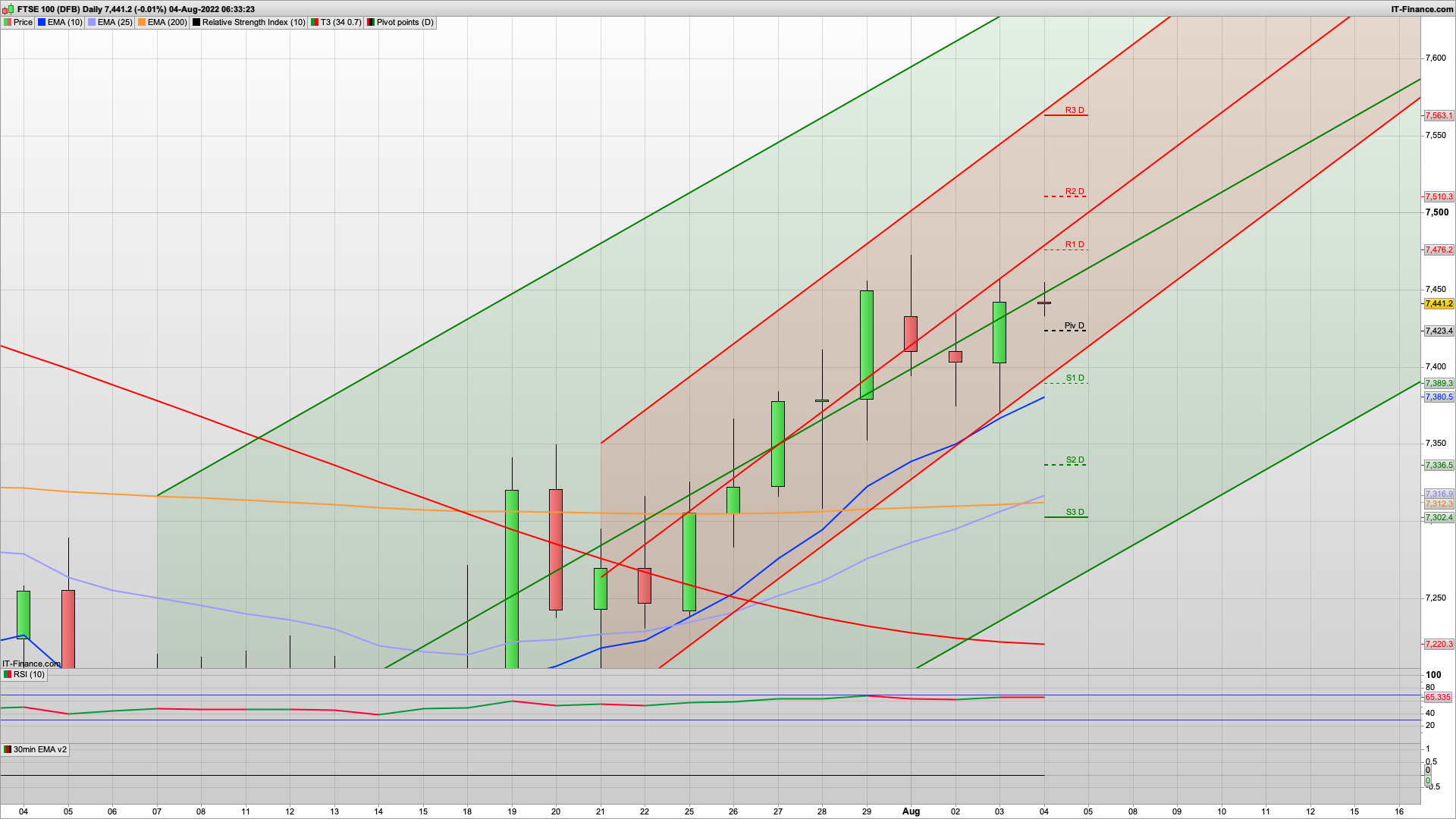 The FTSE 100 closed higher Wednesday as Avast led the gainers after it won regulatory approval for NortonLifeLock’s acquisition deal. The blue-chip index added 0.5% to 7,445.

A global share gauge pushed toward the highest level since early June, after a US rally triggered by earnings and robust economic data. US futures fluctuated as traders weighed how much further the revival in equities from bear-market lows can go. The dollar was little changed.

The dollar hovered near its highest this week after Federal Reserve officials continued to stress that policy tightening is far from over. However, Treasury yields remained down from two-week highs as investors stayed sidelined ahead of employment data this week that will guide the path of interest rates.

U.S. S&P 500 futures were about flat, after the underlying index jumped 1.56% overnight and the tech-heavy Nasdaq surged 2.73% to a three-month peak.

Taiwan
In roughly 24 hours, Chinese officials and propagandists went from warning of a “powder keg” to pleading for patience as Beijing struggled to articulate a cohesive response to Nancy Pelosi’s landmark trip to Taiwan. The Speaker stared down Beijing’s threats — and she gave Xi Jinping a reality check. Back home Pelosi’s trip left the White House fuming behind closed doors, with senior officials’ attempts to persuade her to delay the trip falling on deaf ears, leading to a scramble to minimize the fallout. All eyes now will be on China’s response going forward, after the People’s Liberation Army pledged missile tests and provocative military drills.

Keep Fighting
Federal Reserve leaders pledged the central bank would continue an aggressive fight to cool a US inflation rate that’s at a four-decade high, even if higher rates cause the risk of recession. Fed presidents speaking this week emphasized that inflation at a 40-year high has yet to slow, and pushed back against the perception the central bank was pivoting to a less aggressive phase of tightening monetary policy. Fed Chair Jerome Powell last week cited Federal Open Market Committee forecasts that the Fed would raise rates to 3.4% at the end of the year and 3.8% in 2023.

Today’s big event is of course the long awaited BoE rate news at midday with the 50bps hike likely to be confirmed. The FTSE100 will probably continue to rise as the longer term charts remain bullish for the moment and the Raff channels continue to head up.

To start with we have decent 2h support at the 7440 level which has held well overnight, so we may well see an initial push up towards the R1 and key fib level at 7476 to start with. Above this then bulls will be looking to test the 7500 level and possibly just past as we have R2 at 7510 and then the daily resistance at 7513.

The rate hike is most likely priced in as its been an open secret that 50bps was on the cards. I don’t expect them to do more than that at this stage but we will probably get another 50bps before the end of the year. Can see interest rates getting to 2.5% before too long.

Below the S1 level, and we do also have the bottom of the 10d Raff channel here so it should be decent support, then they will be looking at 7336 for S2 and almost a test of the 25ema on the daily at 7317 today. If that 25ema holds then it may well be decent swing long territory for a push up as we head towards September.

That said I don’t think we will get that low today!

The S&P500 and the Dax40 are both bullish on the 2h charts as well after yesterday so we could well see some more upside on them as well today.

Good luck today and don’t forget the BoE at midday.