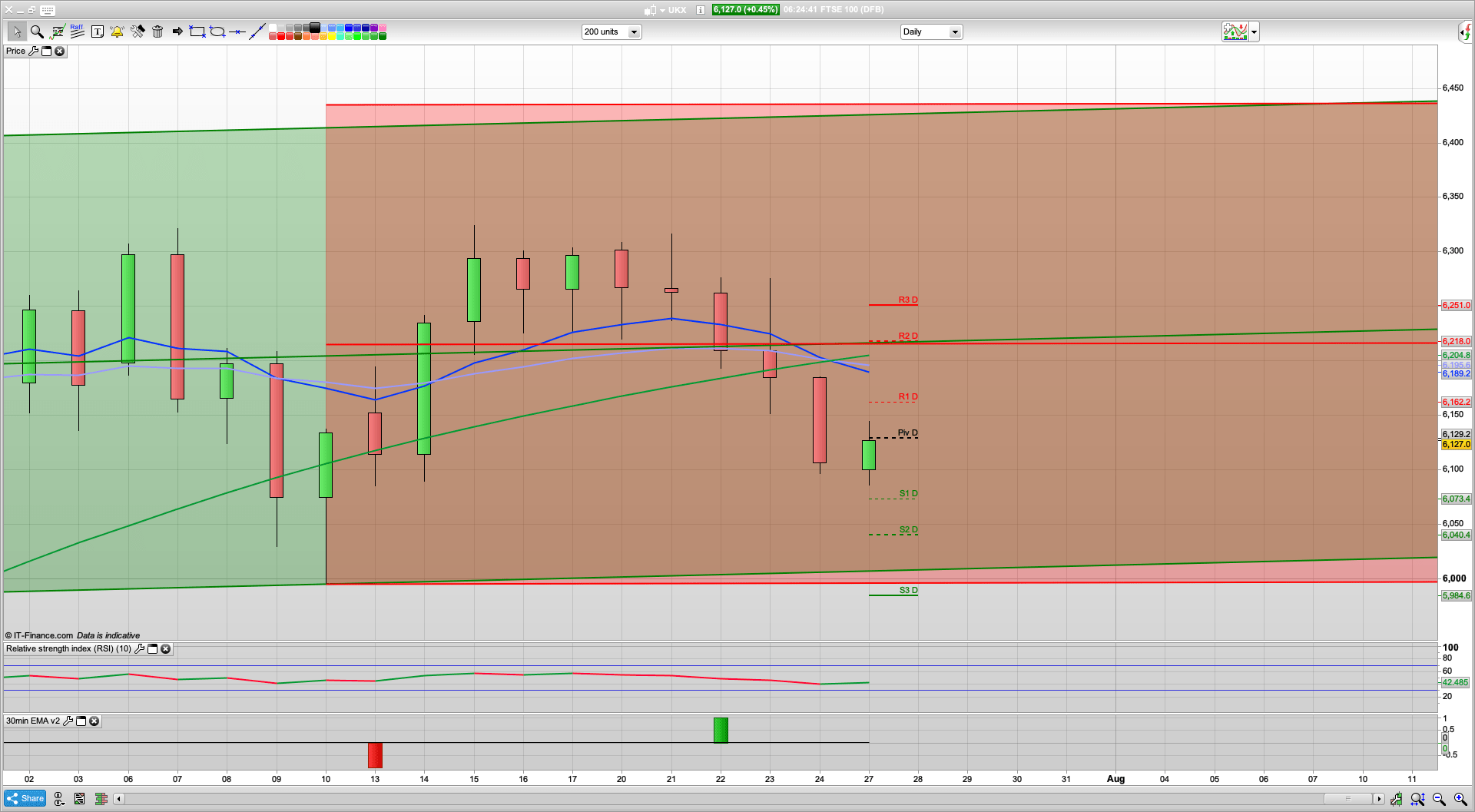 On Friday, global markets were rattled on account of strained relations between the US and -China, with a pick-up in European and American business activity doing little to ease investors’ nerves. The mood darkened after Beijing ordered Washington to close the US consulate in Chengdu, in a tit-for-tat retaliation after China was told to close its Houston consulate earlier this week.

In the US, tech stocks continued their retreat with the NasdaqASDAQNasdaq index around 1pc in the red. Intel tumbled  by almost a fifth in afternoon trading on Wall  Street after the semiconductor maker said it was six months behind schedule in developing its next-generation chip technology. The benchmark S&P 500 index also erased all of its gains for the week as rising Covid-19 cases affectedweighed on sentiment. The retreat came despite US business activity rising to a six-month high in July. However, companies reported a drop in new orders as the resurgence of virus cases across the country weighed on demand.

For three straight days, the US has recorded more than 1,100 coronavirus-related deaths, while more than 4  million Americans have been infected. Oil prices also slumped.

Meanwhile, gold kept marching towards a record high as it broke above $1,900 an ounce for the first time since 2011. Flaring geopolitical tensions and worries over global growth haves driven demand for the safe-haven asset. Gold is also getting support from low or negative real rates, a weaker dollar and expectations of rising inflation.

Virus Slowdown
Reported cases and fatalities fell in many states hit hard by the coronavirus, including Florida, Arizona, California, Texas and New York. Former FDA Commissioner Scott Gottlieb said he sees “unmistakable signs” the pandemic is slowing in Texas and Arizona but is less certain about California and Florida. U.S. coronavirus cases rose by 65,965 in the latest daily count, a 1.6% increase that’s less than the 1.8% average over the previous seven days. Deaths increased by 921, breaking a four-day streak of more than 1,000 deaths per day. Spain is scrambling to stay ahead of new outbreaks of the virus that prompted the U.K. to impose a quarantine on travelers returning from the country, dealing a new blow to its tourism-dependent economy. Reporting on coronavirus deaths in the U.K. is being paused for a review of the methodology. Australia’s Victoria state reported a daily high in the number of deaths from the virus and another surge in infections. North Korean leader Kim Jong Un ordered a city near the border with South Korea locked down after officials found a person who may be infected, state media reported.

The dollar extended its recent slide and gold rose to a record high as investors mulled simmering Sino-American tensions, the upcoming Federal Reserve meeting and signs the virus spread in the U.S. may be slowing. Global stocks were mixed. The Bloomberg Dollar Spot Index fell as much as 0.8% to its lowest in about a year and a half. Shares fluctuated in Japan, Hong Kong and Australia, while U.S. and European futures climbed after last week’s declines. A 10% surge in Taiwan Semiconductor Manufacturing Co. led shares in Taipei toward a record high. Silver rose as investor appetite for precious metals continued. Treasuries were steady.

Investors this week will be looking to the Federal Reserve’s meeting for clues on what comes next for policy amid expectations for more accommodation ahead. That comes as wrangling continues in Washington over a stimulus bill. On the virus front, cases fell in California, Arizona, Florida and New York.

We have had an overnight low at 6085 but the bulls have fought back and we are back around the 6130 previous support level. As such we may well see them try and defend this level initially today, for a push towards the R1 and fib level at 6160. With the weakness at the back end of last week, the daily chart has gone bearish and has 6195 as moving average resistance and as such, if we see that level we may well see the bears reappear here.

Virus second wave fears are coming to the fore again now, though cases in the US are waning a bit currently. Gold has continued to rise with a move above the Raff channels suggesting 2050 is looming, as the flight to safety continues. Gold certainly pricing in some rocky times ahead! The tax rises are starting now too with a potential plan to get all over-40’s in the UK to start paying towards elderly care. C-19 being a good cover for a multitude of things, including further tax rises across the board over the next few years.

For today, I am looking at the 6130 level as initial support, though 6115 (30min coral but red) below this may be seen on an early move down, and then a rise to the 6162 level. Above that 6195 mentioned then 6218 is R2 and then the more significant level of 6251 where we have R3. However, with the 200ema at 6189 and the daily resistance levels just above that the bulls might have a bit of a job to break above the 6200 level. Am watching this 6195 level closely today and a short here looks to be worth a go, despite a possible bull Monday! We also have the FOMC meeting later this week, so we may well be a bit lacklustre till that.

If the bears break below 6130 initially, then the overnight low is next support, then 6040 below that where we have daily support and S2. Should that go, then the bottom of the Raff channels are next up, both around the 6000 level, and with round number support here the bulls will be keen to defend that level should we get that low.

The S&P has defended the 3200 level and indeed the bottom of the 20 day Raff channel here has held. As such they need to break above the overnight high at 3230 now, for a push back up to 3290 where we dropped off from on Thursday. If we dip below 3200 then 3150 is the daily coral line (green) and the next support level below that to watch for.