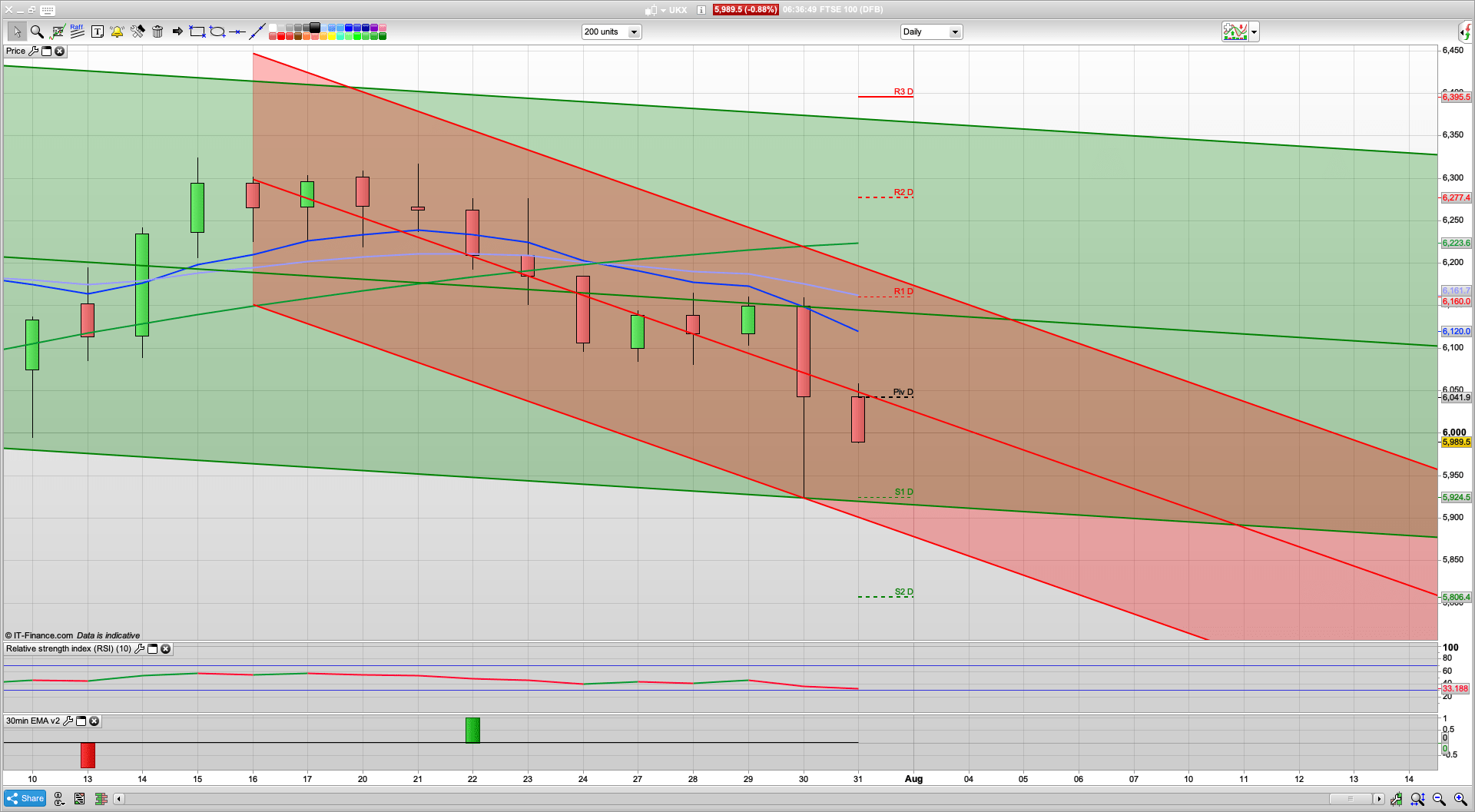 That was quite the V shaped day yesterday, with the FTSE 100 dropping down to double bottom with the low in June at 5920 before a massive recovery, led by the US tech stocks. Fortunately for the bulls the price got back above 6000 , while the S&P defended the vitally important 3200 level.

Global stocks fell on Thursday as the US and Germany revealed their worst-ever economic contraction and a string of major companies released results that laid bare the virus’s devastating financial impact. The US and German economies – biggest in the world and in Europe respectively – both saw their GDP drop by a record-shattering 10pc between April and May. Meanwhile, Lloyds Bank and Shell both revealed heavy hits to their balance sheets as a result of the pandemic on a major day for corporate reporting.

Here’s a quick summary of the day…

U.S. gross domestic product shrank the most on record in the second quarter, while 17 million Americans claimed state unemployment benefits in mid-July. That GDP drop — an astounding 32.9% when annualized — was widely anticipated, but the jobless claims figure was not. An increase of almost 900,000 in the number of people claiming continued benefits is the latest evidence that a nascent economic recovery is being undermined by the resurgence of the coronavirus, and could ultimately be short-lived. And the outlook may get even worse. Crucial lifelines in the pandemic, like the extra $600 in weekly unemployment benefits, are expiring, and lawmakers have made little progress on agreeing to another stimulus package. “You’ve got this triple whammy coming through,” said James Knightley, chief international economist at ING Financial Markets. “One is the fear factor from Covid-19 on the rise and how that changes people’s behavior. Secondly, you’ve got unemployment rising because states are reversing course on their reopenings. And then, third, you’ve got the income squeeze” with expiring benefits.[Bloomberg]

Apple reported quarterly revenue that crushed Wall Street forecasts,causing the stock to jump about 5% in extended trading. The world’s largest technology company also announced a four-for-one stock split after its shares surged more than 80% in the past year. Fiscal third-quarter revenue came in at $59.7 billion, a record for the June period. That was up 11% from a year earlier and smashed analysts’ estimates of $52.3 billion, according to data compiled by Bloomberg. The pandemic is keeping people at home, which has spurred demand for Apple devices to help millions of consumers use the internet to keep in touch with friends, family and co-workers. The pandemic likely boosted iPad and Mac sales due to lockdown rules and an increase in remote learning, while Apple store closures are weighing on iPhone sales, Apple Chief Executive Officer Tim Cook said. Apple’s cheaper iPhone SE, released in April, was also well timed for leaner economic conditions. The company plans to launch new Mac computers with its own processors, a cheaper HomePod, and a slew of new iPhones later this year.[Bloomberg]

U.S. equity futures climbed after stellar earnings from technology giants, while the dollar extended this month’s slide amid renewed concern about the strength of the American recovery. Asian shares retreated.

S&P 500 and Nasdaq contracts advanced as Apple Inc., Amazon.com Inc., and Facebook Inc. jumped in after-hours trading. Stocks underperformed Friday in Japan and Australia, with Tokyo due to report record infections and amid a warning curbs in Melbourne could be tightened. Shares in China, Hong Kong and South Korea were modestly lower. The Bloomberg Dollar Spot Index is on track to match its worst month in a decade, while Treasuries inched higher.

Friday after a wild day so might be an interesting one! The S&P still looks to be trying for the 3290 level or higher, and in fact with that defence of 3200 and climb yesterday the 2 hour chart is bullish with 3241 as support today. That may help the bulls early next week and not quite so gloomy as it was yesterday morning! Possibly just consolidating ready for another push higher!

For the FTSE, we have initial support at the key fib today at 5975, and then yesterdays low at 5925 below that. We also have S1 at this level so if the bears do appear then we may well see a drop down to this level first thing. If the bulls can defend that then we should be back on for a rise towards 6000, and possibly the 2 hour resistance at the 6060 level. If however we break below 5925 then  5899 is the bottom of the 10 day Raff first up, and then further downside towards 5858 and S2 at 5808. Would it get that bearish on an end of month Friday? Probably not, and not if the SP can defend the 3240 level.

If the bulls were to break above 6062 today then we still have to test the 25ema on the daily, sitting at 6160 today. That level still looks to be worth. short and is also near the top of the 10 day Raff channel, sitting at 6195 for today.

Overall Im thinking that today might not be as bearish, and that drop yesterday could of course just have been a massive bear trap. The SP certainly paints a more bullish picture than the FTSE but generally it might not go full bear pessimism just yet. It’s certainly shaken off the poor economic data easily (S&P that is).

So for today looking at 5975 and 5925 as the supports, 6060 6160 as the resistance levels of note. Have a greta weekend and good luck today – remember as its Friday be a bit more cautious but we could easily have an end of month ramp.