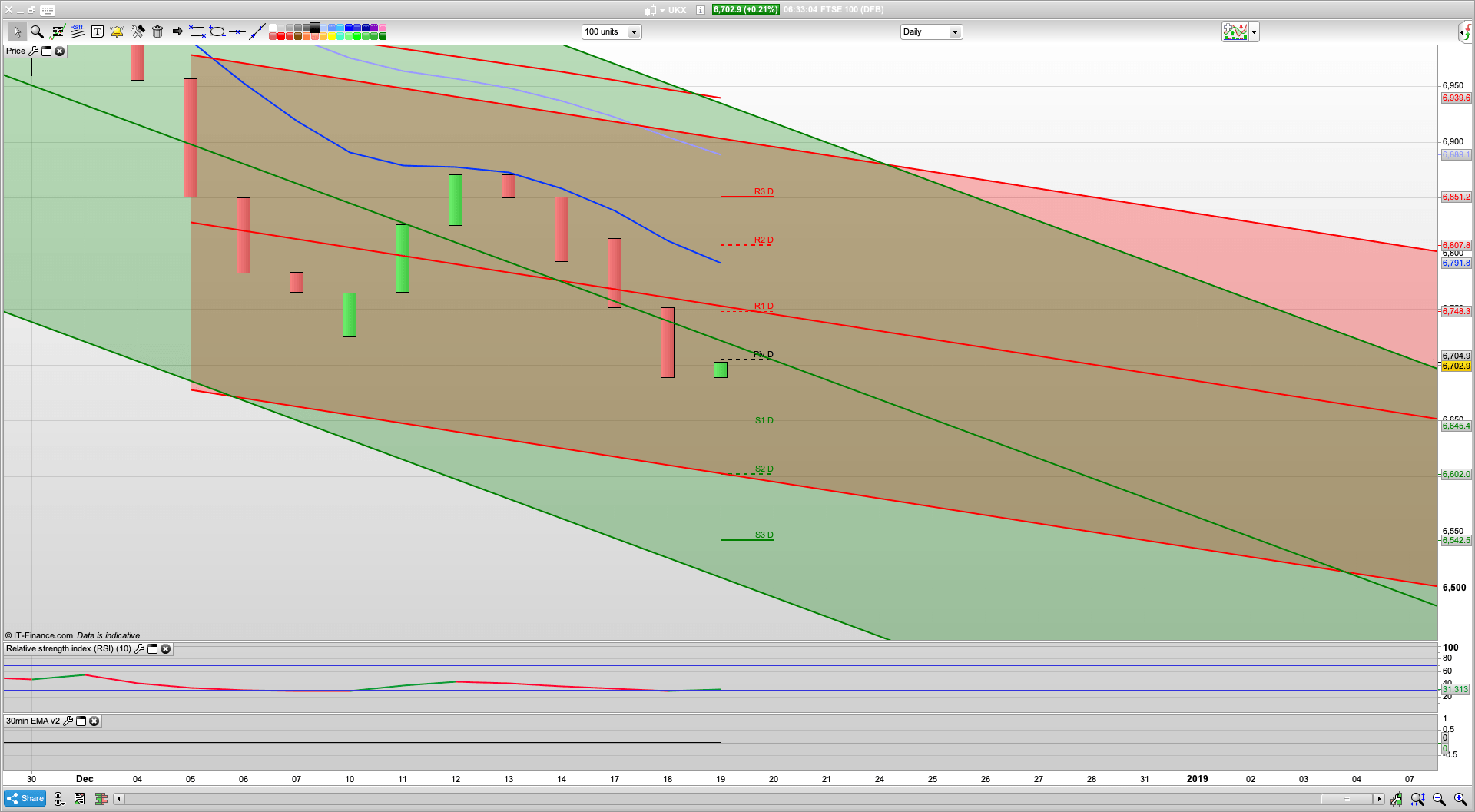 Nice move down yesterday for the 6762 short, and overnight we have retested the recent low at 6670, which has held so far. Double bottom or are we heading lower?  Today of course we have the Fed rate decision – will they raise as per the plan but now against a weak backdrop? Trump doesn’t think so!  The Fed began a two-day policy meeting Tuesday, perhaps its most scrutinised session in years, as it takes direct fire from President Trump. He has blasted the central bank for two days running, calling for officials to cease raising interest rates, a level of public pressure no president has put on the Fed in decades. While financial conditions have tightened significantly, the U.S. jobs market is still strong  and the outlook for 2019 is relatively solid, so the case for a hike hasn’t disappeared by any stretch. However, “fear of fear itself” has become an economic risk as 2019 comes into focus.

Economic jitters and surging supplies from the U.S. to Russia hammered oil again, with crude suffering its biggest decline in more than three weeks. Futures slid 7.3 percent in New York on Tuesday, putting prices on track for their worst quarterly loss since the start of the last oil market crash in late 2014.

The FTSE 100 has tumbled to a two-year low ahead of the Federal Reserve’s crucial meeting tomorrow as global growth fears mounted on markets and Donald Trump urged the US central bank to hold fire on another rise in borrowing rates.

London’s stock market took its cue from a second day of sharp declines on Wall Street as oil prices slid to a 13-month low and European shares extended their losing streak to a fourth day. The UK’s blue-chip index sank 71.65 points to 6,701.59, its lowest close since November 2016 and a 15pc plunge since May’s record high.  Concerns over rising interest rates, the trade war, simmering geopolitical tensions and slowing economic growth have combined to threaten a record bull run in recent months. Growth worries have spiked ahead of the Federal Reserve’s decision later today with the S&P 500, the American benchmark stock index, sliding to a 14-month low on Monday.

Mr Trump warned the Fed not to “make yet another mistake” by voting for a fourth rise in interest rates in 2018 as cracks appear in the global economy and markets. The US president urged its rate-setters to “feel the market”. Investors are concerned that the Fed is increasing borrowing costs at a rapid pace as growth around the world stutters and the central bank could today signal a pause in its hiking cycle in 2019.

Indicators on Friday compounded fears of a sharp slowdown in the Eurozone and Chinese economies this year. Economists also expect growth in the US to fizzle out in 2019 as the Fed tightens policy and Mr Trump’s fiscal stimulus wears off.

We have the Fed decision at 7pm this evening, with a long mooted rate rise on the cards, but now against a much weaker backdrop and pressure from Trump not to rise. Going to be an interesting one, but also harder to call. Overnight we have tested the 6670 low again (and moved slightly below) but have then bounced back. If this area holds then it does set up a double bottom support zone for a rise now towards 6800. However, we are testing the daily pivot at 6704 as I write this and we may well see an early drop off during this morning. The price of oil has moved below the $50 level so that will weigh on the FTSE, as well as a slight uptick in cable.

Below the 6670 area I am looking at fairly decent support at the 6640 area this morning, though if this breaks then 6617 is next up. We are also then starting to move into pretty bearish territory and weakness leading up further down towards the 6580 level. Still not much sign of the Santa rally, but of course something like the Fed not raising rates might be a catalyst for a bullish end to the week.

Resistance wise today then we have the 6704 level to start with, but 6746 is R1 and also the key fib so likely to see a stutter here. Not in the trade plan but could be worth a short here. If the bulls can break this area then a rise towards 6800 looks possible as we have the 2hr coral and daily resistance at 6792 and 6797. The 2 hour coral is steadily falling and likely to cap any rise on the first test of it.

So, tough one. I am veering slightly into the bullish camp, mainly as that 6670 area held overnight again, but watching the 6640 level closely if we do get a dip. The news flow is certainly pretty bearish at the moment, with a lot of headwinds for the bulls at the moment. Lots of talk of crashes and so on, but as we all know, a crash doesn’t happen when its expected – they usually come up from nowhere. Or usually anyway!