Good morning. The FTSE remained fairly bullish yesterday testing the 6600 level mentioned. The short off the 20 day Bianca channel didn’t get much only dropping 10 before the bulls brought it back up. The 10 day at 6596 was slightly better for the short, with a low achieved after of 6577, still not showing much bear though. Whilst the bulls are in control, buoyed by the fact that the Syria situation might not escalate into a war, the next level of interest is the 6620/30 area where there is a cluster of resistance, most visible on the daily chart 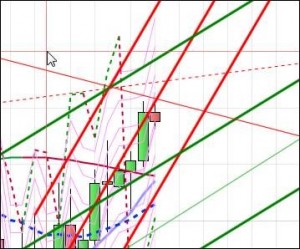 with the descending ProTrend line, from the 1st August, as can be seen on the right. I therefore still remain with the view that we are not going to push massively higher from here in the short term, and fully expect a smallish dip here then a rise into the year end.

Asian stocks swung between gains and losses after President Barack Obama pulled the U.S. from the brink of a military strike against Syria. Energy producers led declines.

The MSCI Asia Pacific Index was little changed at 137.08 as of 1:14 p.m. in Tokyo, having swung between gains of as much as 0.4 percent and losses of 0.1 percent. The measure advanced 6.2 percent in the past nine days as factory output in China accelerated to a 17-month high. The rally drove the gauge’s 14-day relative strength index, an indicator of trading momentum, to 66 yesterday, near a threshold of 70 that signals to analyst shares may have risen too far.

“People are taking profits,” Naoki Fujiwara, Tokyo-based chief fund manager at Shinkin Asset Management Co., which oversees about $6.5 billion. “Syria’s situation was much more unclear last week and investors couldn’t take a position, but now things have turned and they are willing to take more risks. But uncertainties around Syria do remain”

Obama said in a live broadcast from Washington today that he had asked Congress to delay a vote authorizing the use of military force while pursuing a diplomatic solution that would have Syria surrender its chemical weapons.

“We’re still cautiously optimistic,” Daphne Roth, Singapore-based head of Asian equity research at ABN Amro Private Banking, which oversees about $207 billion, said in a telephone interview. “Asia is very polarized and I prefer countries that are running current account surpluses such as China. Liquidity will be withdrawn out of Asia as Fed tapering materializes. That will have a big impact.”

The Federal Reserve has said any reduction in stimulus will be tied to a sustained recovery in U.S. employment. The central bank will decide to cut its $85 billion in monthly bond purchases this month, according to 65 percent of economists surveyed by Bloomberg from Aug. 9-13. The Federal Open Market Committee holds a two-day meeting on Sept. 17-18.

“Markets probably won’t shoot much higher unless we have more positive catalysts,” said Shinkin Asset’s Fujiwara. “They will take a breather from time to time.”

Futures on the Standard & Poor’s 500 Index slipped 0.1 percent today. The equity gauge advanced 0.7 percent in New York yesterday, extending gains for a sixth day, as reports showed China’s economy is improving and amid signs of easing tensions over Syria.

We are still within the 30 minute channel which will most likely contain prices today. To start the day off the EMAs are looking bullish though the price is virtually at the 6602 resistance level that will be key. If that’s broken then the 6627 area is likely to be hit though with some significant resistance at around this level on the daily chart, and also on the other indices (Dax, S&P) the bulls might struggle to really push on above that. If they do however, then 6650 is the next level to watch. For the bears, a break below 6550 will break the upward trend and there will be more downside.