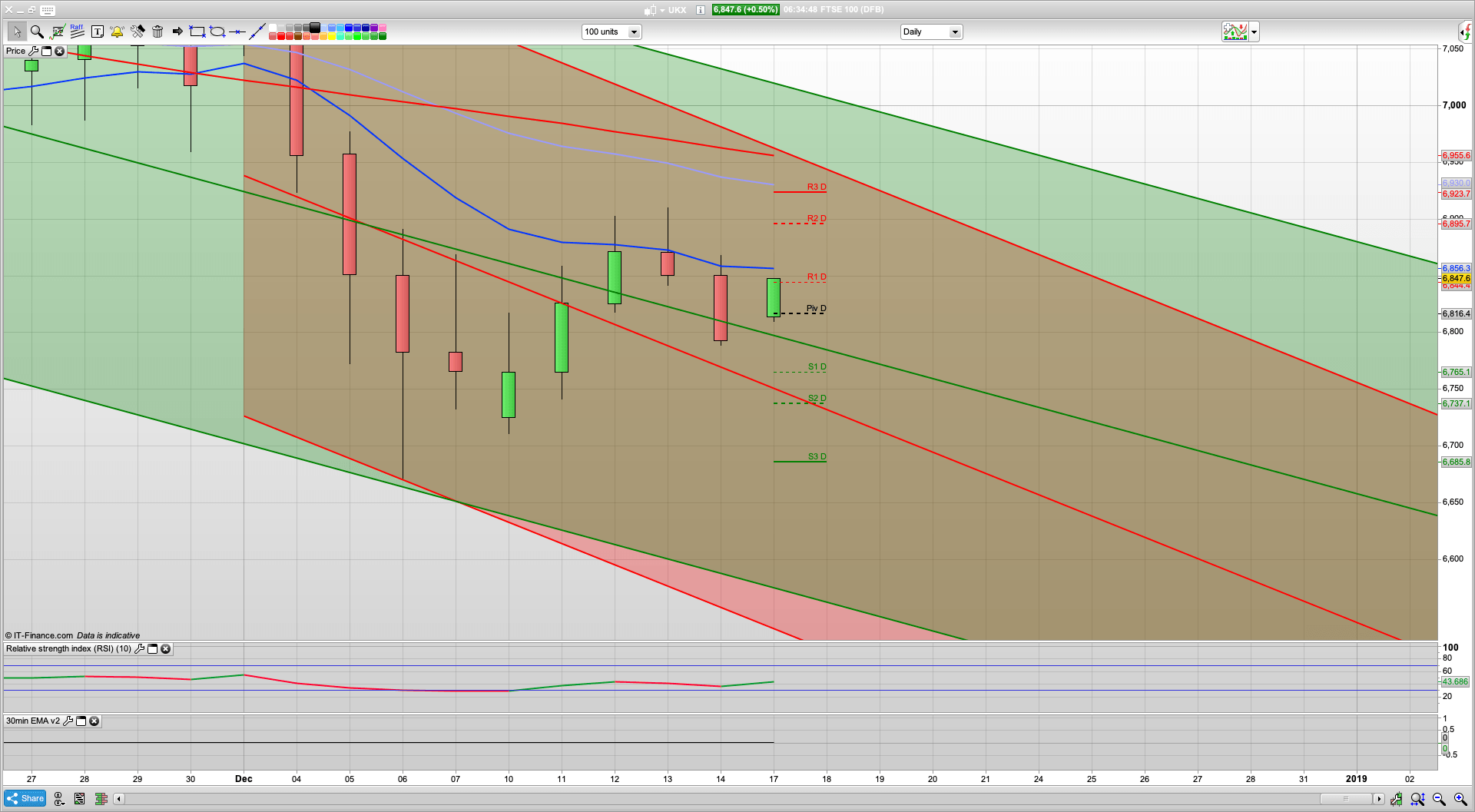 Fridays short worked well from the 6863 resistance area. In a bullish twist though the lows have held again at the 6790 level and we are looking to start the week fairly bullishly.

The global economy appears to be at a tipping point as stagnation in Europe and a relentless slowdown in China threaten to bring last year’s recovery to a juddering halt. Higher interest rates and the end of the fiscal spending spree in the US also mean the world’s biggest economy’s growth rate may have peaked. Growth in the eurozone has almost completely disappeared as businesses reported the weakest expansion in four years, with France even entering reverse gear this month as the “gilets jaunes” protests shook the economy.

Theresa May’s team pushed back against reports they are warming to a second referendum on Brexit as the U.K. prime minister prepares to face Parliament on Monday. David Lidington, May’s effective deputy, and Chief-of-Staff Gavin Barwell said they don’t favor another plebiscite after newspapers reported they’d held talks on the issue. May herself launched a broadside at former Prime Minister Tony Blair for championing a “People’s Vote.” Speculation has intensified about a second referendum on leaving the European Union since May withdrew a House of Commons vote on her divorce deal with Brussels when it became clear it was headed for defeat.

This week
The U.S. Federal Reserve’s monetary policy decision is the highlight for the markets this week, with the U.S. central bank widely expected to raise interest rates for the fourth time this year at the two-day meeting that starts Tuesday. Rate decisions from the Bank of England and the Bank of Japan are both due Thursday. Australia releases its mid-year economic and fiscal outlook on Monday, and the central bank releases its minutes on Tuesday.  SoftBank’s Japan mobile business makes its trading debut after a $23.6 billion IPO on Wednesday.  A partial U.S. government shutdown could start Friday as President Donald Trump says he would be “proud” to close the government if he doesn’t get funding for a border wall. Also on Friday, quadruple witching – the simultaneous expiration date of stock index futures, stock index options, stock options and single stock futures – could jolt trading volumes.

I am thinking that we build on the overnight strength today and will see an overall bullish day. We may even get a trending day that sees us reach the recent high at 6915. The bulls need to break 6920 (we have a gap here, and also R3 is 6923 for today)  as that opens up the possibility for a test of the 6960 area, and further builds on this rise from 6670. I have put a short order in at the fib resistance level but with a tight stop as if it doesn’t drop off that level then we more than likely rise further.

If we do get any pull back today I am thinking that buying the dip is a good plan, with support showing at the 6820 level that is worth a long. We have the daily pivot and also the 30min coral for support here.

If the bears were to break below 6815 then there is a small gap at 6800 that may well fill, though it would probably drop back to test the 6785 support level. That area held well on Friday, however the more it is tested, the more likely it is to break, and as such a drop down towards the next key support at 6740. The bulls really need to defend this however, as a break below here turns things very bearish again.