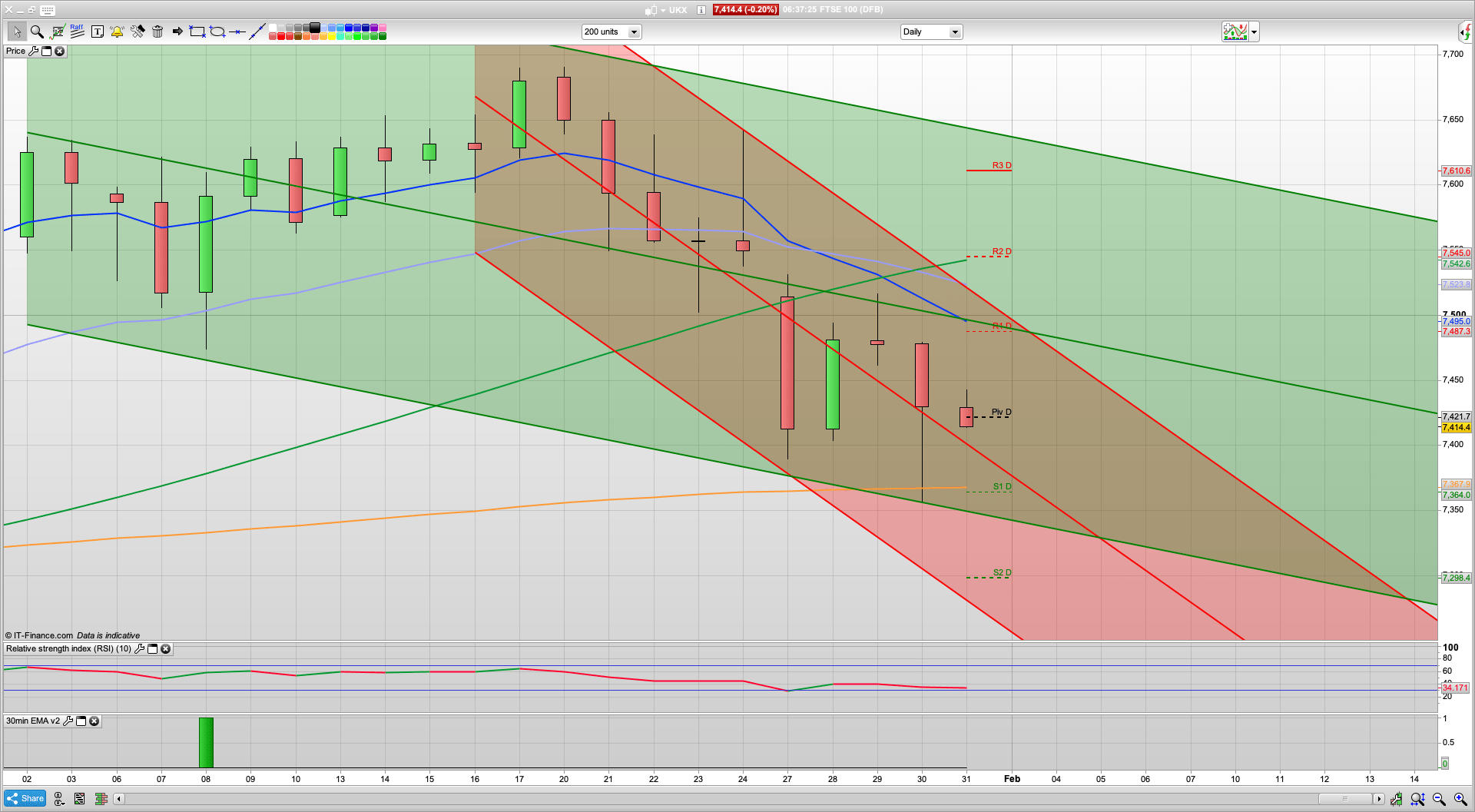 Traders ditched equities and piled into havens such as gold and the Swiss franc as they sought to avoid risky assets. Goldman Sachs analysts noted the Swiss franc had begun to outperform the Japanese yen during recent market pullbacks, which they said “could reflect waning recession fears but rising geopolitical concerns”. The pound strengthened as the Bank of England surprised the market by voting 7-2 to keep its key rate unchanged.

Stock markets in Europe fell into the red yesterday amid growing concerns over the economic impact of the coronavirus. So far it has claimed the lives of 170 people in China. The World Health Organisation has called an urgent meeting on whether to declare a global health emergency.

Many of the major share price moves were news-driven: consumer goods giant Unilever led FTSE 100 risers, climbing 89.5p to £45.28 after revealing plans to review its tea portfolio, while telecoms group BT was the biggest blue-chip faller, dropping 12.9p to 162.4p, having warned it could take a £500m hit due to the Government’s decision to restrict Huawei tech in the UK’s nascent 5G rollout.

The US economy grew steadily in the last quarter of 2019, but undershot President Donald Trump’s target for the year. Uncertainty caused by the US-China trade war weighed on business investment and exports but this was offset partially by consumers remaining upbeat, continuing to spend on goods and homes. Gross domestic product increased by 2.3pc over the year, more slowly than in 2018, according to data from the US Commerce Department. The economy benefited from the President’s tax cuts and billions of dollars of government spending.

However, the bulls appeared late in the day and after the UK close, and we got a strong rally across the board, to take the FTSE futures back above 7450, and the S&P retested the 3295 resiatnce level. The FTSE 100 daily low was bang on the 7355 support level, and the bulls have gained the upper hand for today. The bears will need to break that level for further downside.

The bulls got a turbo boost yesterday evening, as the US rallied from the 3240 SPX level, and the 7355 daily support level held late afternoon. The bulls will be keen to keep the price above the 7400 level where we have the green 30minute coral for support. However, I wouldn’t rule out a dip and then rise as today is of course Brexit day, though its not exactly unknown and therefore in theory priced in.

If we do get a spike down at the open and then a recovery we should then see a rise towards the 7460 level where w have a cluster of resistance levels in play and a level that should see the bears have another go from. As such a short at this area looks to be worth a go. It is Friday though so be a little bit more cautious. If the bulls were to break the 7460 level then 7487 is R1. Would be quite the gain for a Friday though if we were to start testing these levels. That said I wouldn’t be surprised to see the markets pushed higher today and a strong close to generate positive headline on Brexit Day. “Stocks soar as we leave the EU” for example….

Above the 7460 level we also have the daily chart showing the 7523 area as moving average resistance and I am still looking for a test of this line as we more often than not get a decent reaction on this daily moving average.

If the bears were to break below the 7350 level then a drop down towards the 7312 cam break out level is likely to lay out. As mentioned above I do expect them to try and avoid a stock market sell off today though. With daily support at 7309 then we should see a bounce around this area, coupled with the round number as well.

Turning attention to the S&P its climbed back to the 3294 resistance level and once again seen the reaction here. If the bears can defend this then a drop down towards the 3220 S2 (and also the bottom of the 20day Raff) looks likely still. However, if the bulls were to break above this resistance level then they will regain the upper hand and be back in control. New highs abound now we have moved away from the extreme greed and probably stopped out a few longs!