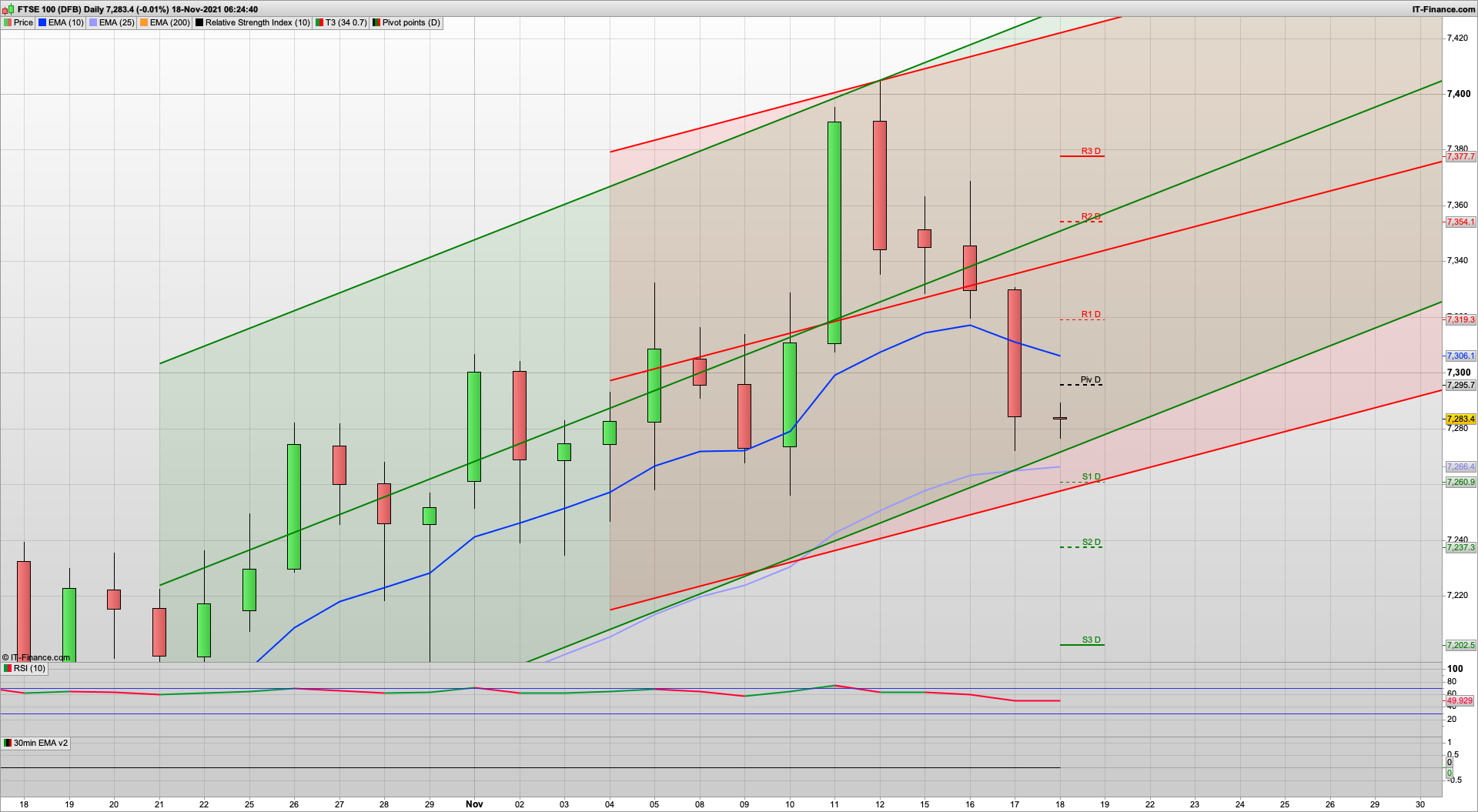 The FTSE 10 finished Wednesday firmly in the red after new figures showed inflation soared to its highest level in a decade last month. The blue-chip index slid 0.5pc to 7,291 points while the pound pushed to new highs against the dollar and euro.

The pound climbed to a one-week high versus the US dollar and a 21-month high against the euro after data showed UK inflation is running at its highest rate for a decade. Figures showing that inflation surged to 4.2pc in the year to October are stoking expectations of an interest rates rise as early as next month. It sent sterling 0.4pc higher against the euro to €1.19. Against the dollar, it edged 0.3pc higher to $1.3480, its highest level since November 10.

Most Asian stocks fell Thursday amid a tumble in Chinese technology stocks and as traders weighed risks to the global recovery from the prospect of faster monetary-policy tightening to tackle price pressures.

Oil extended losses on the prospect of the U.S. and others tapping strategic reserves. China said it’s working to release some crude from its stockpile.

Inflation
Bank of England policymaker Catherine Mann has insisted there’s still confidence inflation will return to its 2pc target – despite data showing inflation has hit a 10-year high. Rising costs for household goods and energy have sparked fears of a threat to the UK’s economic recovery.

The central bank wrongfooted markets by holding interest rates steady earlier this month, but an increase in December’s meeting is now firmly expected. Ms Mann said she was confident that the price rises remained temporary and that the Bank would be able to rein inflation in to its 2pc target.

Nuclear Buildup
The U.S. is seeking ways to discuss “strategic stability” with Beijing to address concerns about China’s growing nuclear arsenal. Joe Biden raised the need for conversations on nukes during his virtual summit meeting with Xi Jinping. Also under the microscope was Taiwan, which remains a flashpoint even after the pair lowered the temperature. Singapore Prime Minister Lee Hsien Loong said he’s concerned tensions between the superpowers over the island could lead to a dangerous misstep. It doesn’t help that Biden keeps flubbing his lines on the issue — he’s made four gaffes in as many months on Taiwan, which have had to be “clarified” at a later date.

Yesterday saw a bit of a slow drift down on the FTSE100, with the 7315 area acting as resistance, and a break of the 7300 level now looking like we may eventually test the 7260 support level.

Likewise the US bulls – they have put up a bit of a defence of the 4685 level so far and we have the 2h coral support at 4689 to start with as well today. We haven’t actually tested that as yet so should we do so today then we may well get a reaction here. The bulls will be keen to get the S&P back above the 4700 level as well.

The FTSE100 bulls will also be keen to recapture 7300 as that would then lead to a test of the 2h coral at 7340. This week certainly has the feel of a consolidation week really – no really conclusive moves but it has reset the RSI(10) that was a bit overbought on the daily charts. Its now at 49 for the FTSE100, so middle of the road really. Above 70 is overbought and below 30 is oversold as a rough rule of thumb, though it can remain overbought/oversold for a while.

Thats said, I am thinking that we will get a bounce at the 7260 level this morning. The ASX200 was fairly steady and the S&P looks like it wants to get back above the 4700 level. The longer timeframe trends remain up as well.

Initial resistance is at the R1 and 200ema 30min at 7315-7320 and tallies with a double top with yesterday high. Above that 7340 as mentioned, as we have the key fib and the 2h coral here, and should the bulls break that then 7377 is R3. Not sure that we will see that level today though. The key for the bulls will be the S&P500 breaking above the 4700 level.

On the news front, the UK and the EU are reportedly near an agreement on Northern Ireland medical supplies, which would be their first deal to break the deadlock in talks over the NI Protocol.