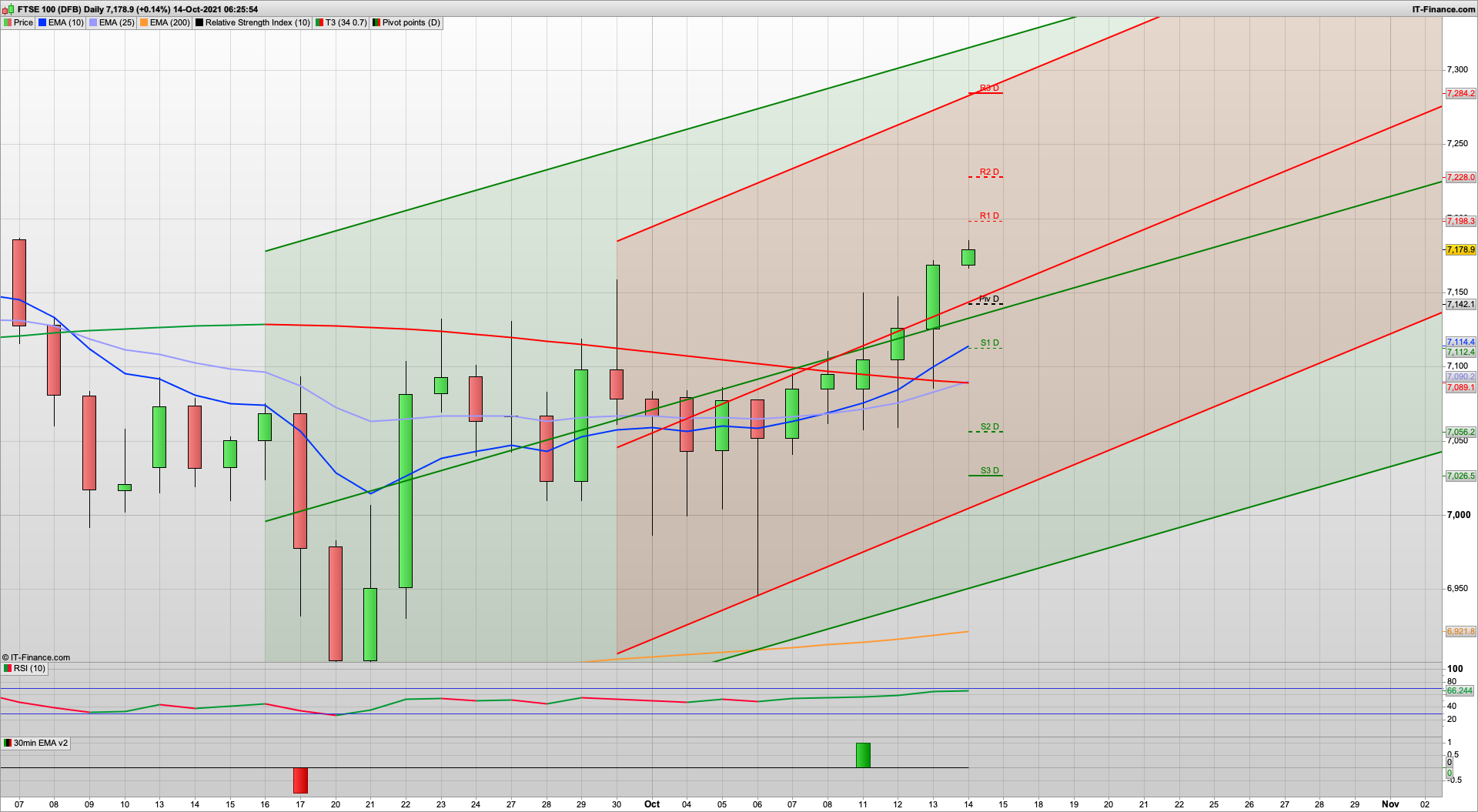 The FTSE 100 inched higher yesterday despite the GDP miss. It dipped slightly below the 7100 level but the bulls defended 7085 and we have steadily risen since, with a stronger showing overnight, helped by the S&P continuing to rally during the afternoon, and a strong Asian session.

The economy grew by just 0.4pc in August, less than had been expected by analysts, while the Office for National Statistics (ONS) also revealed that output shrank in July – the first contraction since January’s lockdown. The economy remains 0.8pc below its February 2020 pre-virus peak despite a strong second quarter.  Growth between July and September is now likely to fall short of the Bank of England’s 2.1pc estimate – which it cut two weeks ago – while inflation surges above 4pc by the end of the year.

Most Asian stocks rose along with U.S. equity futures Thursday as traders weighed the economic recovery from the pandemic and the prospect of tighter monetary policy to tackle inflationary pressures.

Equities advanced in Japan and South Korea but fluctuated in China, where data showed the highest factory-gate inflation in almost 26 years. U.S. and European futures pushed higher after Wall Street snapped a three-day losing streak, with the tech-heavy Nasdaq 100 outperforming the S&P 500.

Longer term Treasury yields increased, paring an overnight rally. The 10-year yield remained below 1.60%. A report showed U.S. inflation held above 5%, while the latest Fed minutes signaled a tapering of bond purchases from mid-November or mid-December.

Federal Reserve officials broadly agreed last month that they should start reducing emergency pandemic support for the economy in mid-November or mid-December during increasing concern over inflation, according to minutes from their September meeting. The program could then end by mid-2022. The inflation outlook was raised in the near term after a robust discussion, though staff continue to expect the recent acceleration is “transitory.” Federal Open Market Committee members noted that their contacts generally didn’t expect bottlenecks to be fully resolved until sometime next year or even later.

The bulls were a bit slow defending the 7100 yesterday and the bears tried to break lower but we have now had the bounce. Funny that 7086 was the low though….. The bulls look to remain in control as we squeeze higher with a test of the 7210 daily resistance area looking likely today. This is pretty much in between R1 and R2 for today and it’s possible that we get an overshoot towards the R2 level at 7228) before a drop back.

The ASX200 had a rise and dip session and it feels like we may well do the same, at least initially. The S&P may then drag the FTSE100 back up later on. With the strength on the S&P yesterday the 2h chart has gone bullish now with 4361 showing as good support, along with some supports on the 30m namely, daily pivot, 200ema and the green coral all around the 4360 area.

Above the 7228 level then the bulls will have their running shoes on and a climb towards the top of the Raff channels (these are now heading up more steeply, along with bullish moving averages on the daily since the hold of the 7070) around the 7300 level.  We are also now moving out of the seasonally weaker period (September and early to mid October) and as you know I am thinking a 7500 year end. Just need the US markets to get bullish too and off we go! The S&P will need to get above 4400 in the first instance.

For the FTSE100 bears they will be looking to take this below the 7260 level as that then opens up 7121 for another test of the 200ema on the 30m, with 7097 key fib level below that. Will we see a bearish day today…. I think the bulls are going to push this higher, especially if any dip on the S&P gets bought up and we see that 2h support hold at 4361.